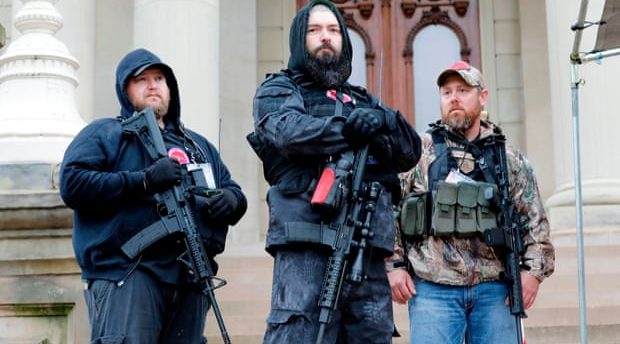 Are Armed Right-Wing Protests A Harbinger Of Fascism?

Above photo: Armed protesters gather on the steps of the Michigan state capitol in Lansing, on April 30. Jeff Kowalsky / AP / Getty Images.

Protests continue to call for the reopening of the economy, with demonstrations in Michigan, Massachusetts, Texas, California, and other states. Many of the protesters are armed with rifles and handguns.

In Michigan, for the second time in two weeks, an “American Patriot Rally” took place on the state capitol steps on April 30. The event was initiated by Michigan United for Liberty and joined in by other right-wing groups. The thuggish Michigan Liberty Militia provided “security” for the action. Hundreds of armed protesters moved into the halls of the statehouse and crowded into the gallery of the state Senate after first demanding to be allowed on the House floor.

At a May 2 protest in Boise, Idaho, militia extremist Ammon Bundy compared government quarantine measures to the Nazi holocaust against Jews and called such government intervention “tyranny.” A “Reopen Philadelphia” protest, organized by small business owners and members of the far-right Proud Boys, will be held at City Hall on Friday, May 8.

This push to reopen is proceeding even though the number of COVID-19 cases continues to rise in all of the states that are rushing to relax social distancing and lockdown rules. Trump administration policy set guidelines for the states to follow in easing restrictions, none of which have been met. Trump has expressed the need for distancing but also expressed support for these demonstrations as being the expression of “very good people.”

Actions backed by a section of the ruling class

These protests, which include armed far rightists and anti-science vaccination opponents, are being financed by a section of the capitalist class. All the most backward elements of U.S. society are being gathered under the broad banner of reopening the economy and “freedom.”  The Charles Koch-financed Americans for Prosperity and the American Legislative Exchange Council (ALEC) are among the institutions pushing these reopen mobilizations.

The pro-business magazine Forbes notes that a web of “various gun rights groups, state Republican Party organizations, and conservative think tanks, religious and advocacy groups” as being behind the protests. Forbes states that these mobilizations are not a grassroots movement but are the product of a “cynical manipulation” by pro-business forces.

It’s clear that some capitalists see the necessity of getting the economy, and their profits, moving again by any means necessary. The Texas Lt. Governor has expressed the necessity of “sacrifice” in the name of the economy. Trump, speaking to ABC News, said: “There’ll be more death … I think we’re doing very well on the vaccines but, with or without a vaccine, it’s going to pass, and we’re going to be back to normal.” He continued, “We have to get our country back. … You know, people are dying the other way too.”

Former New Jersey Governor Chris Christie joined the death chorus by comparing the current situation to the sacrifices made during World War II, “We sent our young men during World War II over to Europe, out to the Pacific, knowing that many of them would not come home alive. And we decided to make that sacrifice because what we were standing up for was the American way of life. In the very same way now we have to stand up for the American way of life…” In brief, we must let people die for Wall Street.

When the meatpacking giant, Tyson, moved to shut down facilities in the face of spreading infection in the workforce, Trump issued an executive order under the Defense Production Act to force meat processors to stay open despite the risk to workers’ health. In several localities, Democratic Party officials have moved to abrogate union contracts as an emergency measure. The potential for workplace exposure is great and there is the potential for a large increase in COVID-19 cases nationally. Workers in retail, food production, transportation, warehousing and logistics, and other industries are endangered.

In testimony before Congress on May 6, epidemiologist Dr. Tom Frieden, president and CEO of Resolve to Save Lives, projected that based on “the number of people already infected and being infected now, the virus will have killed at least 100,000 people in the U.S. within a month [May]. He also stated that the situation would only worsen without extensive testing.

On the same day, however, conservative economist Avik Roy parroted one of Trump’s favorite lines to argue before a Senate committee that quarantine measures have not been necessary. “Thirty-seven thousand American die each year in traffic fatalities, and yet we don’t shut down the roads,” Roy said.

The lack of a centralized federal response, and the expectation that the states would develop their own policy and acquire their own equipment, tests, and PPE, has led to numerous unnecessary deaths. Trump opposes widespread testing, which is one of the keys to a safe relaxation of restrictions. In some cases, federal authorities have seized shipments en route to states and municipalities. This led to the GOP Governor of Maryland placing coronavirus tests acquired from South Korea under armed guard in a secret location.

A harbinger of fascism?

The demonstrations do not represent a mass fascist movement, but these far-right mobilizations carry the seeds of such a movement. A portion of the capitalist class sees fit to use these reactionary mobilizations to advance their interests. So far, however, the traditional “legal” channels for attacking workers suffice to meet the needs of most capitalists. This could change in the context of a broader, more militant, working-class fightback. It’s not inconceivable, for example, that armed rightists would attack workers who strike against dangerous working conditions.

The working class and its allies are the key to opposing these ultra-right demonstrations. Mass-action counter-mobilizations—based on the unions, community groups, and other working-class organizations—must be built to oppose this attack on working people. This includes the right to organize self-defense and to form defense guards, based in the mass organizations of the oppressed and exploited, to protect against far-right attacks.

Reliance on cops and courts for protection is not the answer. All too often we see police allying with far-right groupings. U.S. socialist leader Farrell Dobbs noted, “The line of the police is to defend the exercise of the formal democratic rights of the fascists, on the one hand, and not to ‘see’ the violations of the democratic rights of the fascists’ victims. Meanwhile, the cops take full advantage of any violation of bourgeois-democratic law that the antifascists may commit. In any kind of confrontation between antifascist and fascist forces, the basic line of the cops is to protect the fascists in any way they can and to join in the victimization of the antifascists.”

The labor movement also needs to raise broad demands for workplace safety and workers’ rights. Many parents are expected to return to work, but there is no provision for the care of children who are not in school, as school systems across the country remain shut down. The demand for safe, free child care is essential for parents to be able to work. The health-care system must be nationalized under democratic workers control. Health care must be considered a human right and not a privilege. To achieve even these modest goals will require political independence for working people from the Democratic Party.

A job should not be a death sentence! Cut the workweek with no loss in pay! Living wages for all! Mass testing and workplace safety now! Free, safe child care for all! Free healthcare for all!