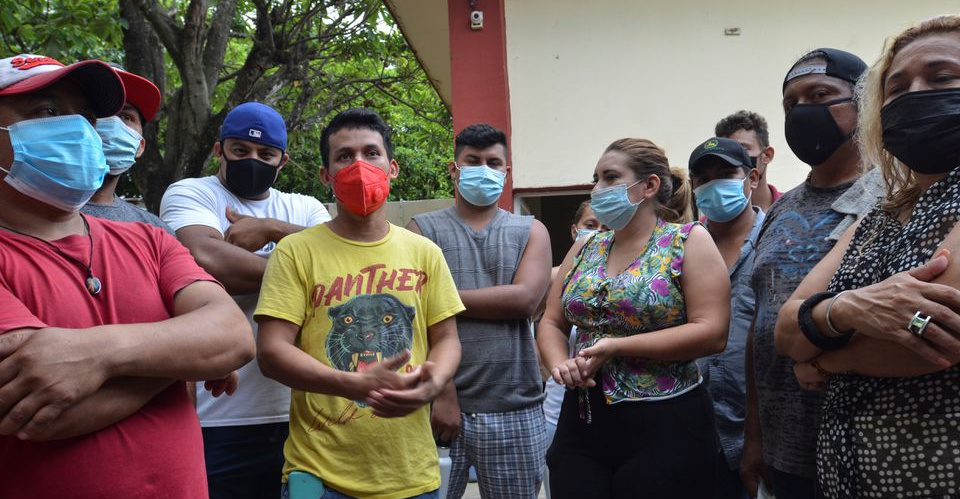 “Record numbers” of migrants are coming into the United States from Nicaragua, according to Newsweek (7/29/21), which blames the increase on “arbitrary arrests and human rights abuses” by the Nicaraguan government. Former Sandinista leader Sergio Ramírez, writing for El Salvador’s El Faro (8/20/21), claims that “repression” by President Daniel Ortega’s Sandinista government is causing a “dramatic growth” in migration by Nicaraguans.

Reuters (9/2/21) agrees, describing the government “crackdown” as stirring a “fast-growing exodus” from the country. The Wall Street Journal (9/22/21) has also identified the “crackdown,” quoting a 19-year-old Nicaraguan who hopes to get asylum in the US as claiming that “in Nicaragua, our fate is prison or death.”

Migration from Nicaragua has increased, from a few hundred per month to a peak of 13,456 in July, since falling sharply. (See table.) But Nicaraguans are still only 3% of total apprehensions in the year so far, which number 1.5 million.

These news outlets are ignoring the fact that, while numbers of Nicaraguan migrants have risen, so have those from almost everywhere else: Nearly five times as many migrants are arriving at the southwest border than was the case over the same period last year.

The bulk of migrant apprehensions are still from Mexico (35%) and the “Northern Triangle” of Guatemala, Honduras and El Salvador (42%). Ramírez—who was Ortega’s vice president from 1985–90—says the triangle should now be a “rectangle” including Nicaragua, but his case for that is based on politics, not numbers.

Like the Wall Street Journal, several outlets quoted Nicaraguans who maintain they are victims of repression. Reuters, for example, spoke to Nicaraguan opposition activist Jesus Adolfo Tefel, who says he left because he feared arrest.

In El Faro, Ramírez cited the tragic case of Óscar Javier Fuentes, recently murdered in Mexico, who apparently fled Nicaragua because his brother died in the violent coup attempt in 2018, and he feared the same. In June of that year, his brother William Fuentes, an opposition supporter, was killed when manning an anti-government roadblock at La Trinidad, near Estelí, which was notorious for violent incidents. On May 30, those controlling the roadblock shot at a caravan of vehicles carrying Sandinista supporters, killing two and injuring 21 others.

None of the reports state that those who were arrested for crimes they committed in 2018 were given amnesty in June 2019, when some 400 people guilty of murder, torture and other atrocities were released from prison on condition that they cut their links with groups organizing violence, and others who had evaded arrest were pardoned on the same basis. Only those who continue to be involved in violent groups are vulnerable to arrest under the terms of the amnesty.

US corporate media are eager to bolster their oft-repeated narrative that Nicaragua is an oppressive dictatorship. Reuters quoted a State Department official, “What we are seeing in Nicaragua is an escalating climate of repression, fear and hopelessness,” further vilifying the country in the run-up to its presidential election on November 7.

Yet the only recent arrests in Nicaragua have been of prominent opposition representatives accused of specific violations of laws, relating (for example) to the illegal use of money from non-profit organizations and the receipt of undeclared foreign government funding, activities that would be crimes under US law. (An interview with a director of the Public Prosecutor’s Office gives the background to the arrests.)

Writing for the Quixote Centre (9/17/21), Tom Ricker points out that attributing increased Nicaraguan migration to a political crackdown “is not really true, or, at least it is far from the whole story.” Rather than fear of arrest prior to November’s elections, in practice there is much greater fear of the potential effect of intensified US sanctions, if current legislation (the RENACER Act) were to be approved. Talking to people in the city of Masaya, I found no one interested in making the hazardous journey to the US, but colleagues speaking to people in three different rural areas found significant interest in migration for economic reasons, including from Sandinista supporters worried about post-election sanctions, which could hit an economy which is only just recovering.

In Central America, climate change is having an increasing effect on rural economies (FAIR.org, 7/30/19). The media are beginning to acknowledge this as a cause of migration in the case of neighboring Guatemala, which has produced a fourfold increase in US bound migrants this year. Politico (7/19/21), for example, says, “It’s Not a Border Crisis. It’s a Climate Crisis,” while the Associated Press (8/10/21) also blames Guatemalan migration on climate disasters. None of the media examine this as a reason for Nicaraguan migration, even though last November’s two unprecedented hurricanes added to the economic damage done by droughts, the pandemic and the violent coup attempt in 2018.

Increased migration is due not only to Central America’s problems, but to the positive draw of the recovering economy in the US, while Latin America is still suffering the pandemic’s effects (Americas Quarterly, 6/3/21). In Nicaragua, activities by coyotes—smugglers who charge migrants large sums to assist their passage north—have increased significantly, according to reports I received, with offers of supposed guaranteed employment for those who make it.

There is evidence that Nicaraguans (like Cubans and Venezuelans) are treated more favorably by border officials. More than half of migrants encountered by border officials are currently expelled from the US on public health grounds (known as Title 42). This applies particularly to Mexicans, of whom 86% are immediately returned to Mexico. But officials give more sympathetic treatment to citizens from countries that are at odds with the US government, admitting them temporarily under Title 8, which gives them a chance to apply for asylum. Of Nicaraguans encountered, 93% are admitted on this basis; for Cubans, the proportion is 71% and for Venezuelans 97%. Such treatment is not extended to migrants from the Northern Triangle countries—Guatemala, Honduras and El Salvador—even though they often have very strong grounds for seeking asylum for a range of reasons (FAIR.org, 12/13/18, 3/25/21).

The Crisis In Costa Rica…Or Not

Reuters (9/2/21) sees no end to the crisis, describing “an exodus shaping up to be among the biggest from Nicaragua since a 1980s civil war.” This threatens not just the US, but neighboring countries too. Of these, Costa Rica is picked out because it has received more Nicaraguan asylum claims than any other country. Now, Reuters says, claims are likely to “overwhelm Costa Rica’s asylum system.”

The New York Times suggests that 10,000 Nicaraguans headed south in June and July (9/5/21), and that Costa Rica has become “a refuge for Nicaraguans fleeing dictatorship” (10/21/21). Exaggerating even further, it said on October 27 that “over 500,000 Nicaraguans have settled in neighboring Costa Rica, many arriving after a round of repression that started in 2018.”

As I have pointed out for COHA (3/23/20), this manufactured “refugee crisis” glosses over the reality of the close economic ties between the two countries: Costa Rica has for decades had a symbiotic relationship with Nicaragua, depending on it for labor for its tourism, farming and other industries, while Nicaraguans benefit from working in an economy where income per capita is five times that of Nicaragua.

But this has changed, with the near collapse of tourism in both countries (but especially in Costa Rica) and the ravages of Covid-19, which have hit Costa Rica’s economy, and that of its neighbor Panama, worse than Nicaragua (FAIR.org, 4/2/21). So, rather than taking refuge there, Nicas are returning home.

In a recent 12-month period (September 2020–August 2021), there were 177,225 cross-border movements by Nicaraguans into and out of Costa Rica, far fewer than in a typical year, when there are around 800,000; and in this 12-month period, slightly more Nicaraguans left Costa Rica (89,928) than entered it (87,927).  Last year, Costa Rica’s vice president Epsy Campbell went so far as to plead with Nicaraguans not to leave her country. Of course, there are unrecorded border crossings too, but it is likely that many of these also involve people heading north rather than south.

Of the Nicaraguans in Costa Rica at any one time, the country’s official migration statistics show that only a very small proportion apply for asylum. A Nicaraguan’s chance of having an asylum application approved is not high—around half get turned down—and waiting times are extremely long.

Nicaraguans living irregularly in Costa Rica saw the 2018 crisis as an unprecedented opportunity to regularize their status by seeking asylum. At the time, Costa Rica’s president admitted that more than 80% of asylum requests came from people who had been living in the country without documents before 2018.

While it is undeniable that more Nicaraguans have sought asylum elsewhere since 2018, compared with very low numbers prior to the country’s crisis, the numbers need to be put in perspective. The chart below shows UN data for different categories of forced migration, internal and external, in Central America for 2020. As Ricker points out in his article (Quixote, 9/17/21), not only is Nicaragua well below all of the Northern Triangle countries in terms of numbers seeking asylum or claiming refugee status, there is basically no internal displacement (“IDP” in the chart) and few “other” categories of concern to the UN Refugee Agency. Honduras, its neighbor to the north, has far more dramatic figures.

The myth that Nicaragua is a major source of migrants heading to the Mexico/US border, and that this is primarily due to repression at home, is a very dangerous one, for at least two reasons.

First, it diverts attention from the much more significant drivers of migration from the countries to its north, where, in addition to natural (and human-augmented) disasters, people are fleeing severe problems of increased poverty, violence, repressive government, often poor public services and systemic corruption. Pretending such problems are worse in Nicaragua than in the Northern Triangle countries is not only absurd, but produces a perverse political focus on Nicaragua that allows the US to evade responsibility for the conditions that have developed in those three countries—at least in part as a consequence of its policy of supporting corrupt, neoliberal governments (FAIR.org, 7/22/18; CounterSpin, 6/25/21).

Second, the media’s exaggeration of the scale of Nicaraguan migration and its message that repression is the main driver for it helps justify the US government’s hostility towards the Sandinista government, enabling it to claim that sanctions and other forms of political pressure will help keep migration down. Yet the reverse is true: Sanctions are already hitting Nicaragua’s poor, via restrictions on international aid and delays in World Bank and other funding programs.

If sanctions are intensified after the election, for example via a trade embargo, they could put greater pressure on Nicaragua’s economy, especially in rural areas. The media will doubtless continue to criticize the government for its handling of migration at the southern border, but at the same time they are helping to justify the US government’s misjudged policies. Much larger numbers of Nicaraguans might start to head north, adding to the encampments on the banks of the Rio Grande.