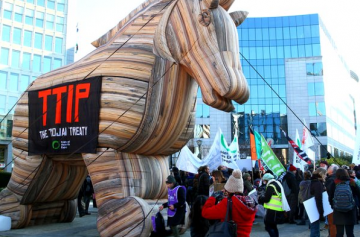 Are the Koch Brothers Trying To Influence TTIP Negotiations?

The latest release of lobbying data on the European Commission’s Transparency Register has raised concerns that the fossil-fuelled Kochs are trying to influence the Transatlantic Trade and Investment Partnership(TTIP) negotiations.

Digging through the data, DeSmog UK found that the European arm of Koch Industry’s legal, lobbying and public affairs branch – known as Koch Companies Public Sector LLC – has spent up to £0.5m lobbying EUpolicymakers on the environment, energy and free trade.

And according to the voluntary register, Koch Industries – the largest privately owned energy company in the United States, known for funding climate denial groups – has a particular interest in lobbying on the “EU’s free trade agreement negotiations.”

While this could mean negotiations within the EU, between the EU and other countries, or both, there is definitely one controversial free trade negotiation going on that immediately springs to mind.

Could it be that the Kochs are lobbying about TTIP?

These ongoing negotiations, known to be shrouded in secrecy, hope to secure a free trade deal between Europe and the United States in order to reduce regulatory barriers to trade for Big Business.

Many have raised concerns over TTIP’s investor-state dispute settlement (ISDS) mechanism, which would allow foreign companies and private investors to sue governments for the loss of future profits caused by decisions made in national parliaments.

A March report by the UK Business, Skills and Innovation Committee warns this may allow for “the possibility of US oil companies challenging environmental regulations on fracking.” Other examples include challenging regulations on chemicals in food and cosmetics, as well as EU restrictions on genetically modified organisms.

Regulatory convergence is a highly controversial aspect of the TTIP negotiations. This is especially true in sectors where the EU has more stringent rules, such as its Registration, Evaluation, Authorisation and Restriction of Chemicals (REACH) – which addresses the production, use, and potential impacts of chemicals on human health and the environment – compared to the US Toxic Substances Control Act (TSCA). And, as DeSmog UK has revealed, REACH is one of the Kochs’ main lobby areas.

Just over two months ago, on 28 April, Koch’s lobbyist met with Lee Foulger, an EU cabinet member, to talk about “energy markets/financial regulation.”

This is the only lobby meeting Koch Companies has had in the last six months, according to the interactive lobby database EU Integrity Watch, launched on 24 June 2015. Meetings prior to December 2014 are not available online.

While the meeting between Foulger and Koch may not be marked ‘TTIP’, it doesn’t mean the topic wasn’t raised. As EUIntegrity Watch explains, 60 percent of organisations currently lobbying on the trade deal don’t properly declare these activities.

Hill, Foulger’s boss, is also an outspoken supporter of TTIP, having promoted it in the Guardian in February, for example. “Don’t believe the anti-TTIP hype – increasing trade is a no-brainer,” he wrote.

Hill also travelled to the US in February to speak about venture capitalism and the CMU at the Brookings Institute, a liberal non-profit public policy organisation based in Washington, DC, which has received more than $1 million over the last decade from the Kochs.

Touting the scale of US venture capital markets, Hill said: “We believe that a single market for capital will benefit the whole European economy, helping to unlock the capital that is currently frozen and putting it to work to support Europe’s businesses.”

Hill then linked capital markets and the TTIP deal, saying: “Both the EU and the US want to maintain and strengthen financial stability. Both of us want to encourage businesses to make the most of opportunities on both sides of the Atlantic, and to do so safely.”

“The main added value of the TTIP will lie in regulatory cooperation – in the so-called ‘behind the border issues’, not in slashing down tariffs or only granting market access. Financial regulation should form part of it. Indeed, with our interconnected world, if we want to join up markets and improve investment flows, how can we possibly leave financial services out?”

Jason Anderson, WWF’s head of European energy and climate policy, told the Guardian earlier this week that, while the Koch brothers were “obviously the biggest problem case on climate change in the US”, any climate science-denying pitches would receive short shrift in Brussels.

However, Anderson added: “Their interest in trade is slightly more worrying though given the concern that private companies would be able to exert more influence there.

“We’ve been assured that important legal matters such as the precautionary principle would not be weakened but these negative forces may feel some possibility of benefit to them [from lobbying] – which is exactly what people have been concerned about.”