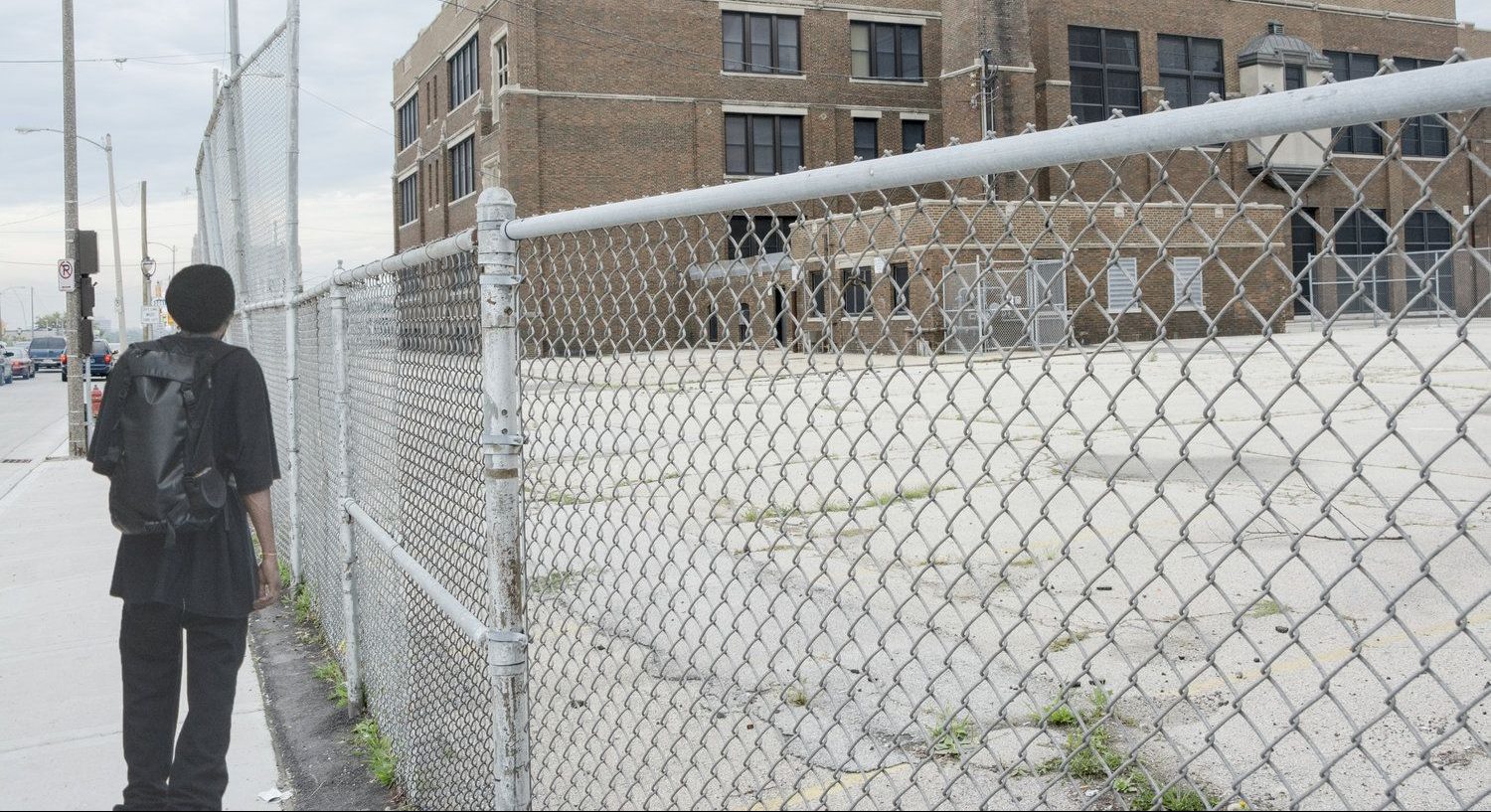 Are Urban Schools A Site of Occupation?

In the third season of Black Lightning, the fictional Black city of Freeland was living under a military occupation by the ASA (the quasi governmental organization occupying Freeland). Not only did the city have heavily armed troopers patrolling the streets, but also had troopers patrolling the schools– detaining anyone they deemed a threat – using violence if necessary.  In episode four, students are in a classroom discussing similar military occupations in multiple countries around the world and their harmful effects on the people being occupied.  Some students agree, but then others claim the ASA occupying their city might be a good thing, suggesting that the ASA’s presence comes with safety.  As they are discussing, the ASA comes into the classroom to detain (and abduct) a student named Tavon, under the suspicion of having powers.  Although his teacher tries to protect him from the ASA’s unlawful detainment, his teacher is beaten with the butt of an ASA officer’s gun, and Tavon is taken away and murdered by the ASA. Enraged by the murder of their classmate, students confront the ASA with a protest to get them out of their schools as well as demand answers for what happened to Tavon.  As one student tries to show ASA officers a picture of their murdered classmate (pictured above), another ASA officer beats the student with their gun and tries to detain him until Guidance Counselor Jefferson Pierce (Black Lightning) arrives to protect his students. Although Black Lightning is a fictional show with a fictional occupation, the idea of Black neighborhoods and urban schools being under an occupation is not far-fetched. Like the military overseas, police use the same technology and tactics to “occupy” Black spaces, specifically schools and neighborhoods.

A military occupation is a war tactic where there is a takeover of one’s land by soldiers and soldiers take total control of the space and the people living there.  When an occupation occurs, there may be a formal declaration, similar to a declaration of war or martial law, but this is not required according to international humanitarian law studies.  During a military occupation, soldiers are trained to use counterinsurgency to earn the trust of occupied peoples and legitimize their presence and actions.  Counterinsurgency by the US Military has a lengthy history beginning with the colonization of Native Americans; these tactics have been used in multiple overseas occupations in places like the Philippines, Afghanistan, and Iraq.  Not all forms of counterinsurgency are the same; some forms were unsuccessful like anti-insurgency tactics in Vietnam but more effective occupations came with superior counterinsurgency strategies, like Iraq.  A major step of counterinsurgency is co-optation.  In overseas occupations, counterinsurgents aim to co-opt women to gain trust of communities.  According to author Laleh Khalili, soldiers in Afghanistan used local women in “Female Engagement Teams” to gain information about the terrain from women in exchange for resources.   When resources are provided, it further legitimizes the need for occupation while ignoring the lack of resources related to the occupation.

In Beyond Bratton, Ruth Wilson Gilmore and Craig Gilmore discuss police forces’ history using militarized weapons on low income and predominantly Black communities.  The police chopper, now a staple of policing, was first purchased by the LAPD in 1956 to surveil Black neighborhoods such as Compton.  LAPD would follow this momentum with the creation of the special weapons and tactics (SWAT) team, using militarized weapons(riot shields, tanks, etc) and other equipment(vans, helicopters, advanced surveillance/communications equipment, etc) to attack Black Panther Party members.  Following this police department’s initial acquisition of military-grade equipment, other police departments purchased unsold military equipment through the Department of Defense’s 1033 Program since 1997. Looking at recent protests in response to anti-Black police terrorism, we even see police in riot gear using rubber bullets and tear gas to disperse peaceful, unarmed protesters in multiple major cities across the country.  Tear gas was created during the early 1900s as a form of riot control but was outlawed by many international treaties in international warfare– deeming it a chemical weapon, too inhumane for the battlefield; although many states in the US permit its usage for domestic/non-combat use.

In the murder of Breonna Taylor in Louisville, KY, police refer to Taylor’s home as a “soft target”.  A soft target is a person or object that is unprotected or vulnerable, especially to military or terrorist attack.  About 6% of the US population has served in the military; 19% of the police force are military veterans according to US census data analysis.  Veterans are viewed as more attractive to police departments as candidates because of their discipline and training through the armed forces, making it the 3rd most popular ex-military profession.  Although it is a small number, this vet-to-cop pipeline has come with additional issues.  According to a 2017 study on veterans in the police force, they found these officers were 2.9 times more likely to be involved in shooting incidents.  In addition, the study also found officers from the Boston and Miami Police Departments who served in the military were also more likely to use excessive force; in Albuquerque, researchers found a third of the fatal shootings from 2010-2014 involved an officer with military experience.  A 2018 follow up investigation in Texas found from 2005-15, Dallas police with military experience made up one third of police involved shootings.

During a time of occupation, soldiers gain information and legitimacy from occupied individuals through counterinsurgency tactics.  Researchers argue these tactics are also used in urban neighborhoods by police officers.  In South Central LA, officers are known to earn the trust of elderly women through the provision of resources in exchange for information and unofficial surveillance around the communities they police.  In these communities that may be devoid of resources and dealing with issues of crime stemming from poverty, the provision of resources creates a dependency on law enforcement, which in turn legitimizes their problematic presence in Black communities.  These provisions may come in the form of medical equipment, technology, or even Toys for Tots during the holiday season all with the intention to build trust with communities they occupy. With abundant resources being provided through counterinsurgency, these matriarchs unintentionally become informants for the police.  Information provided through these relationships may permit officers to constantly patrol these neighborhoods looking for crime, often targeting Black youth.

In our urban schools with predominantly Black populations, their school environments are riddled with higher police presences, metal detectors, locker searches with dogs, multiple security cameras, etc.  Black students are three times more likely than students of other races to attend schools with more school security than mental health services.  Furthermore, 51% of schools with a high Black or Latinx population are reported to have some type of law enforcement stationed at the school.  Police often do not have the training to operate in noncriminal contexts, especially with youth; SROs also do not replace health and mental health professionals and their integral impact on students and the school environment. Youth from multiple ethnic backgrounds describe SRO programs as racially biased or dehumanizing, inefficient, and a threat to student safety.  The presence of SROs can create a hostile environment because Black students may associate SROs with police forces that criminalize and terrorize Blacks in their communities. Because of this hostile environment, studies have shown Black students avoid schools with SROs at similar rates as students who have been bullied.

When police are stationed in schools, student arrest rates increase because of the criminalization of student (mis)behavior.  Schools with SROs report increases in student offenses and school-based arrests by as much as 400 percent.   The presence of SROs is also associated with increases in student arrests for low-level offenses that would normally warrant a detention or a suspension with Black girls being 6 times more likely to be suspended than white girls. According to the ACLU, most states reported that schools with SROs were 3.5 times more likely to arrest students than schools without SROs.  Another study found schools with SROs had higher crime rates than schools that did not have SROs, even after controlling for preexisting differences between schools.  As police enter urban schools, schools often have to fit into their law-and-order doctrine to ensure school safety.  This comes in the form of zero tolerance policies, cumbersome metal detectors, locker searches, security cameras, culturally biased dress codes, and other mechanisms used to pathologize non “respectable” forms of Blackness in the school.

SRO counterinsurgency may look like being a sports coach after school, having a rapport with popular students during passing time, or even starring in students’ Tik Tok videos during recess all with the motive of gaining trust to gain information and further legitimize their presence in the school environment.  This legitimization allows SROs to be viewed as normal and integral part of urban schools, while ignoring the multiple problems they bring.  Additionally, their legitimacy allows educators to problematize students who have negative perceptions of the police because of their negative experiences with law enforcement;  these students are often Black. With this culture of occupation in our schools, the occupiers are never problematized. Instead it is Black students who are framed as the problem needing to be monitored and contained.Although we are currently socially distanced, once a vaccine is available students will eventually have to return to the school building.  Prior to this pandemic, we have witnessed multiple instances of School Resource Officers assaulting Black students – slamming them, beating them, choking them, even tazing them.  Even with remote learning, we have also seen how the culture of policing in schools has invaded the home. Without a fuller understanding of how the military influences law enforcement and their anti-Black practices around school safety, what are we bringing Black youth back to? I think it’s important to reconsider the role of police in urban schools knowing Black people’s collective and recent history with law enforcement. There are multiple grassroots organizations such as BYP100 (Chicago), Assata’s Daughters (Chicago), GoodKids Madcity (Chicago), Leaders Igniting Transformation (Milwaukee), and Students Deserve (Los Angeles) fighting for the abolition of police in schools.  In Madison, WI, Freedom Inc, a grassroots organization dedicated to political education and uplift for marginalized youth and their families, successfully removed police from their public school district.  If we follow the momentum of our activists, we may ensure the schools Black youth are returning to are free from COVID and occupation.

Chetachukwu U. Agwoeme, MA is a PhD student at the University of Pittsburgh studying Urban Education. Chetachukwu’s scholarship is dedicated to interrogating our current practices around school safety in regards to Black students. Ideally, he wants to change schools (which have been sites of suffering for most minoritized students) to places where students learn how to free themselves and free each other. He holds undergraduate and graduate degrees from the University of Wisconsin-Madison and the University of Maryland, College Park respectively.