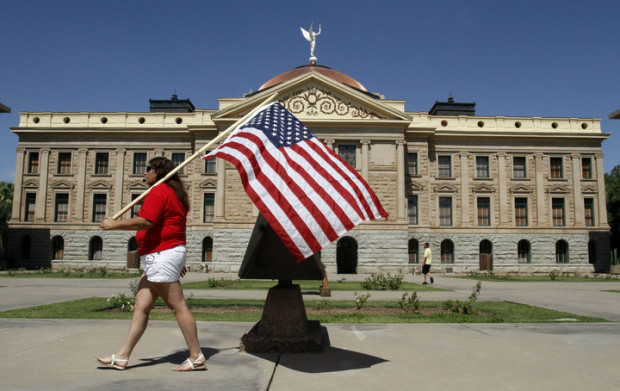 Above Photo: DARRYL WEBB/REUTERS. A protester marches around the Arizona State Capitol in Phoenix, Arizona, on June 25, 2012

An Arizona bill that would have let the state government charge protesters the same way it charges terrorists will not get a hearing in the state House, Speaker J.D. Mesnard (R) said Monday.

Last Wednesday, Senate Bill 1142 passed the state’s upper chamber on a party-line vote, prompting an outcry from watchdogs like the American Civil Liberties Union of Arizona over its chilling implications for free speech.

Hundreds of people called Mesnard’s office to voice their concerns about the bill, he told The Arizona Republic, leading him to decide against pushing the legislation forward. Regardless of the bill’s intent, the conversation surrounding it had become unavoidably toxic, he said.

Republicans maintain the legislation was only intended to curb the threat of “paid protesters,” despite there being no evidence such a group exists.

Rioting is already illegal in Arizona. But this bill would have greatly increased prosecutors’ ability to pursue rioters, including by redefining what a “riot” is. As The Huffington Post explained last week:

Senate Bill 1142 seeks to limit political demonstrations by expanding the definition of a “riot” to include actions that damage property, and making rioting an offense that can be prosecuted under racketeering statutes.

The legislation is written in a way that would allow protesters to be charged ― even if they don’t do anything. As the Arizona Capitol Times reports, racketeering laws permit police to arrest people for planning to commit a crime ― before anything has actually happened. Even those who don’t participate in a demonstration could be charged. The bill’s fact sheet explains that “an overt act is not required” to prove conspiracy.
“The purported purpose for this bill isn’t based in reality,” Steve Kilar, the communications director for the ACLU of Arizona, told HuffPost last week. “The bill’s supporters are using the false ‘paid protestors’ argument to connect this bill to what is commonly the purpose of anti-racketeering laws: targeting the financial incentives of criminal enterprises.”

“But if this bill were to pass, ‘riot’ would join ‘terrorism’ as the only racketeering crimes in Arizona that would not require a financial incentive,” Kilar said.

On Monday, the civil liberties organization seemed pleased by the news that the bill was dead:

Although we’re relieved this bill appears to be dead, we still have a lot of work to do nationwide to stop similar attempts to roll back our freedoms of speech and assembly,” Kilar told HuffPost on Tuesday. “This Arizona bill was only one of more than a dozen proposals that have cropped up across the country that are intended to limit, or even criminalize, our ability to protest.”

“People are spending time making signs and marching because they want to see change,” he added. “Legislators need to stop trying to silence these efforts. It’s time for them to start listening.”

This story has been updated with comments from the ACLU of Arizona.