Teachers in the southwestern US state of Arizona have overwhelmingly voted to strike to demand improved wages for educators and support staff, and restore more than $1 billion in school funding cuts over the last decade. At a press conference Thursday night, officials from the Arizona Education Association (AEA) announced that 78 percent of the 57,000 educators who cast ballots over the last three days voted for strike action.

According to Noah Karvelis, an elementary school teacher and one of the leaders of the Arizona Educators United (AEU) Facebook group, teachers will continue to hold “walk-in” protests at their schools next Monday, Tuesday and Wednesday and then walk out in a statewide strike next Thursday.

The powerful strike vote takes place after statewide strikes in West Virginia and Oklahoma, a one-day strike in Jersey City, New Jersey, and sickouts and protests in Kentucky, Florida and many other states. It is part of an international rebellion of teachers, which in the last week alone saw teachers and university workers striking in the United Kingdom, the Netherlands, Lebanon and Kenya.

The strike could affect an estimated 1 million students in the state. Many high school students are walking out today to mark the anniversary of the Columbine school massacre, and as part of nationwide protests against mass shootings. Students and parents have expressed solidarity with the teachers. 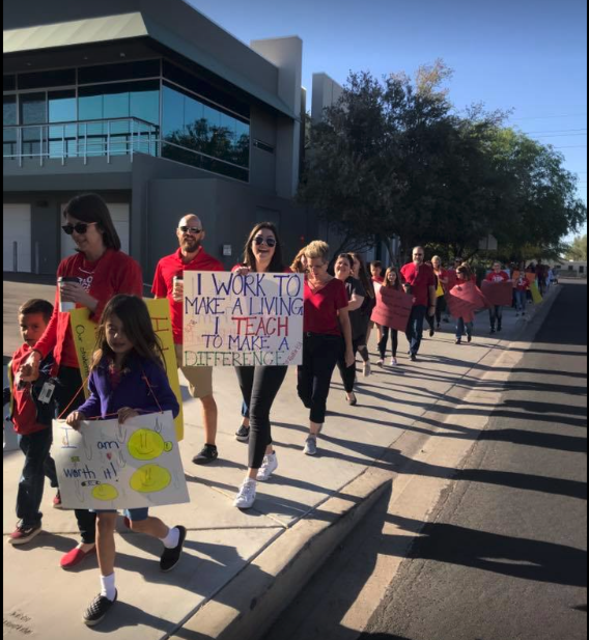 While many Arizona teachers were ready to walk out today, the Arizona Educators United Facebook group, clearly under the direction of the AEA union, is opposing immediate action and giving the governor and the state legislature more time to make some gesture to prevent a strike. AEA President Joe Thomas urged Governor Doug Ducey and state legislators to “Sit down with us and find a solution to the school crisis. Fix this by Thursday, give our students what they deserve.”

As in other states, the movement in Arizona has been initiated by rank-and-file teachers angered over years of collusion by the unions with budget cuts by Democratic and Republican state governments. In every case, the National Education Association (NEA) and the American Federation of Teachers (AFT) have sought to prevent walkouts, and if unable, as in West Virginia and Oklahoma, to shut them down as soon as they can and prevent the outbreak of a national teachers’ strike.

Asked by a reporter what the group would do if the governor and legislature resisted the teachers’ demands, as they had done throughout the 10-day strike by Oklahoma teachers, AEU leader Karvelis could not answer, saying instead, “I’m focusing on what we can do in this legislative session.”

The militant mood of teachers was expressed in a post on the AEU Facebook page Thursday night. “I have been hesitant about all of this, but I think probably a Friday walkout would be most effective at this point. Because Arizona and Arizonans are not used to showing their resolve and their strength, we seem to want this to be wrapped up neatly, tied with a bow, and very tidy and orderly. That ain’t what this is. THIS is hardball, and now I’m ready. Shock and awe.”

On April 11, Republican Governor Doug Ducey announced a plan to give teachers a 20 percent raise over three years—10 percent in the first year and 5 percent in each of the next two years. The proposal, however, would do nothing for support staff—counselors, special education assistants, school aides, cafeteria workers, custodians, school bus drivers and others—and would be funded by slashing funding to the developmentally disabled, state universities and state hospitals. Funding for the raises is also predicated on cuts to the state Medicaid program, which serves 636,000 children from low-income families, as Ducey implements work requirements and five-year lifetime limits approved by the Trump administration.

“Arizona teachers do not trust Governor Ducey to come through with the raises over the next few years,” Laura, a teacher from Tuscon, told the World Socialist Web Site Teacher Newsletter. “The governor is not telling us where the funds are coming from or what other programs he plans to cut in order to allow the raises to go through. If he decides to raise taxes on working-class and poor families, he is going to split the teachers and parents and try to destroy efforts to improve education that way. He has not met all of the other demands of the Arizona teachers, such as funding for students, schools, textbooks, etc., and raises for other school personnel. We are asking also for cost-of-living increases and better health care.

“I am in full support of the teachers in other states, particularly in Oklahoma, where the union has betrayed the teachers. I believe that many teachers here feel the same as I do, and many are ready to strike no matter what, vote or no vote. We need to have solidarity and be united in our efforts for better education for all students, regardless of what communities or socioeconomic backgrounds they come from. Education, as a whole, is being destroyed and if we don’t fight now, we are going to see a populace of educated (the wealthy) and uneducated (working class and poor) people in this country. Education is power, and this government does not want power in the hands of its ordinary citizens. I would support a nationwide strike of teachers as many others here would.”

Teachers spend 10-20 percent of their salaries to pay for school supplies and many take on second and third jobs, including Uber driving and pizza delivery, to supplement their inadequate wages, pay impossibly high health care costs and college student loan debts. Textbooks are so old, teachers say, students are using the same books they did when they were fifth grade students.

“I’m all for a strike,” Jane, a teacher in Phoenix, told the WSWS Teacher Newsletter. “The kids deserve highly qualified educators who are competitively paid and classrooms and facilities that aren’t falling apart. I think it’s important for teachers to unite across the country, but the union here doesn’t seem to be doing much to reach outside of Arizona.”

As in other states, Arizona Democrats are posturing as defenders of public education. But more than two decades of tax cuts for corporations and the rich, paid for through cuts in school and other state funding, has been carried out not only by Ducey and his Republican predecessor, Jan Brewer. Democrat Janet Napolitano, who served as governor from 2003 until 2009, when she quit to become Obama’s Secretary of Homeland Security, backed a half billion-dollar tax cut in 2006, which has robbed the state of critical revenue.

Arizona teachers must learn the lessons of the Oklahoma and West Virginia strikes—which were betrayed by the unions—and elect rank-and-file committees to take the conduct of the struggle out of the hands of the AEA. Instead of appeals to big business politicians, these committees should fight for the mobilization of workers throughout the state, and reach out to teachers and other workers throughout the US to prepare a general strike to defend the right to high-quality public education.