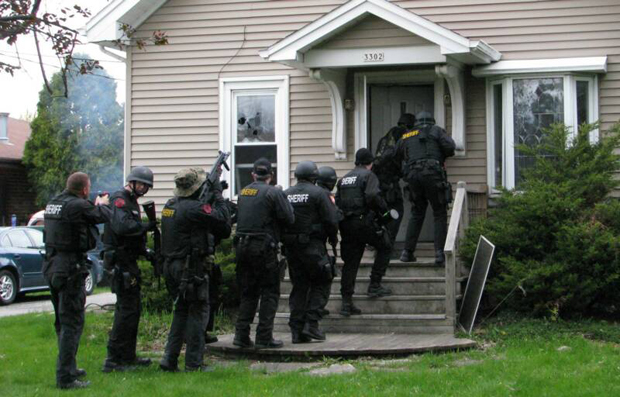 Armed agents bashing down your door before dawn, while you’re still asleep in bed or in the shower or on the toilet, pointing guns at you and screaming, scaring the shit out of you and your children, and often, one of their favorites, shooting your family pet? And sometimes, for good measure, raiding the wrong house?

Where does this happen? And how often?

Don’t believe it? Then you don’t know what’s going on in your own country. Maybe you should watch something other than American Idol or Homeland or MSFuckingNBC and read something more than just emails from MoveOn or your Fearless Leader who sits in the White House.

These raids happen in this country every day. (I know, I know, but it’s usually “just” drug dealers or “terrorists,” so you don’t give a shit.) Even though it’s false that it happens to “just” drug dealers or terrorists. Because it happened to computer analyst Thomas Drake. It happened to Cheye Calvo, mayor of a small town in Maryland. It happened to dozens of non-violent peace activists. I could keep listing people, but at over 100 a day, every day, I’d run out of bandwidth.

So it should come as no surprise that the latest home invasion by our fascist overlords — and yes, that’s precisely what they are — took place at the house of a journalist. An ordinary American journalist.

Maryland State Police and federal agents used a search warrant in an unrelated criminal investigation to seize the private reporting files of an award-winning former investigative journalist for The Washington Times who had exposed problems in the Homeland Security Department’s Federal Air Marshals Service.

Reporter Audrey Hudson said the investigators, who included an agent for Homeland Security’s Coast Guard service, made a pre-dawn raid of her family home Aug. 6 and took her private notes and government documents that she had obtained under the Freedom of Information Act.

The documents, some which chronicled her sources and her work at The Times about problems inside the Homeland Security Department, were seized under a warrant to search for unregistered firearms and a “potato gun” suspected of belonging to her husband, Paul Flanagan, a Coast Guard employee. Mr. Flanagan has not been charged with any wrongdoing since the raid.

The warrant, a copy of which was obtained by The Times, offered no specific permission to seize reporting notes or files.

The Times said it is preparing legal action to fight what it called an unwarranted intrusion on the First Amendment.

. . . Ms. Hudson described a harrowing ordeal the morning her family home was raided.

The agents, who arrived at 4:30 a.m. in full body armor, collected several small arms during the raid, although no charges have been filed against Mr. Flanagan, 54, during the nearly three months since.

Ms. Hudson, 50, said that while the authorities were raiding her house, Coast Guard investigator Miguel Bosch — who had worked at the U.S. Marshals Service — began asking questions about whether she was the same “Audrey Hudson” who had written “the Air Marshal stories” for The Washington Times. Ms. Hudson said she responded that she was.

. . . While Mr. Flanagan has a police record from the mid-1980s related to the unlawful possession of firearms, including automatic weapons, Ms. Hudson fears her private documents may have been the real target of the search.

“They tore my office apart more than any other room in my house,” she said, adding that agents did not take other potentially non-TSA-related documents from the office.

“I had a box full of [Department of Defense] notes,” she said. “They didn’t touch those.”

These are the actions of a police state. I’ve asked it before and I’ll ask it again — when are people going to fucking get it?