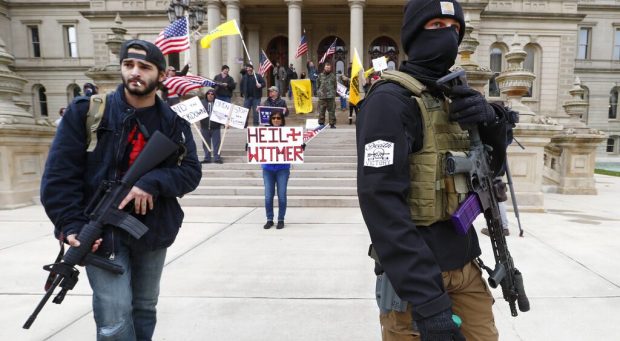 Above: Protesters carry rifles near the steps of the Michigan State Capitol building in Lansing, Mich., Wednesday, April 15, 2020. From AP Photo by Paul Sancya.

Note: John Pavlovitz clearly makes points that should be obvious to everyone — the terrorism of right-wing armed protesters demanding the economy be re-opened is something only white people could do. If a black or brown person were to take such actions, they would be arrested or worse, shot by the police. Even though this will seem evident to some, many white people even when confronted with such clear analysis, will be unable to see it. We need to make sure it is widely understood as white terrorism.

And, on Empty Wheel, Marcy Wheeler makes some additional important points about these protests.  These protests are going to extend the stay at home and physical distancing orders that have shut-down the economy. Wheeler points to an important chart: 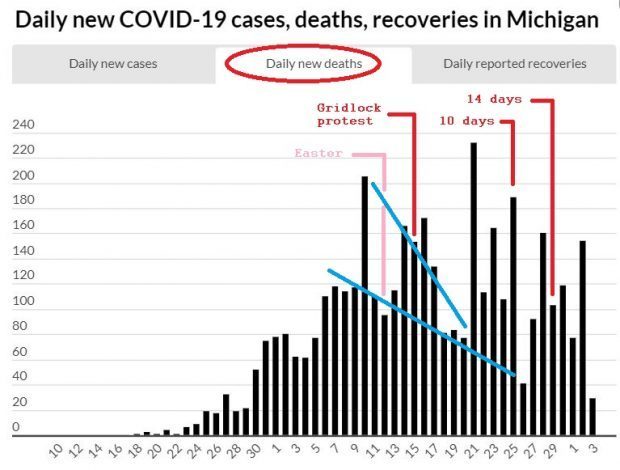 Discussing this chart, Wheeler explains “Deaths were trending downward until the idiots’ Gridlock protest. It would be nice to know how many of the spikes in deaths were people who attended the protest, or who broke the Stay Home order because they were inspired by Gridlock to do so. We may never know how many deaths were because of asymptomatic carriers exposed on that date unless researchers conduct a forensic genetic examination sometime in the future.

“To ignore this calculus and show up in the capitol without masks, ranting and exhaling in a confined space where law enforcement and lawmakers work is just plain moronic, risking personal health and life in a manner which also threatened others.”

It is not only armed protesters who are making the mistake of not treating this deadly virus seriously. This weekend on the Washington, DC mall the Blue Angels did a flyover that drew thousands.

This is the national mall right now… pic.twitter.com/LRlN84AxPh

The US is responding to the COVID-19 pandemic worse than any country in the world. It is not just President Trump and decisions of many governors but also longterm problems in the for-profit health system. Not only will the bi-partisans in Washington, DC refuse to give the people what super-majorities want, National Improved Medicare for All so everyone can have access to healthcare from birth to death, but both parties have failed to invest in a public health system and allowed a crisis of hospital closings. Rural areas and underserved urban communities are suffering in this crisis because of these closures. Since more than half of US discretionary spending goes to the bloated military budget, perhaps American Exceptionalism in this time of crisis needs to beat its chest of militarism. It is a very statement on US political culture.

If people want to protest the shut down of the economy they should join the movement for a General Strike which is demanding a public health response to COVID-19, fair treatment of workers and healthcare as a human right with investment in public health. See

The Era Of Mass Strikes Begins On May 1, First Day Of General Strike Campaign

‘May Day’ Militancy Needed To Create The Economy We Need

Build The General Strike Movement To Change The World
KZ 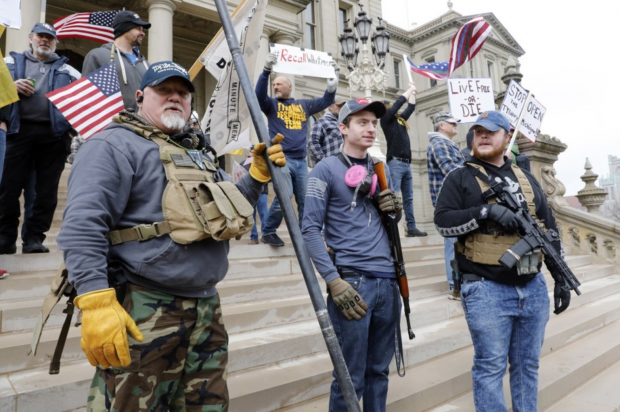 The White Privilege to Terrorize

As a white man watching the Michigan protests of Governor Gretchen Whitmer’s stay-at-home orders, all I could think was:

They don’t get to swarm American capitol buildings in tactical gear with high-powered weapons, screaming in close proximity to police officers.They don’t get to dress up like Call of Duty cosplayers and attempt to physically intimidate politicians into bending to their wills. They don’t get to get to stop traffic in city streets decked out like they work at the Death Star and brazenly wield semi-automatic rifles. They don’t get to terrorize decent people and walk away.

Only white people get to do this.

This violence is a singular privilege afforded to Caucasian men in America.

They can’t even get close to such ugliness.
Heck, they barely get to breathe.

No, they’re shot as 12-year olds walking through the park with toy guns.
They’re choked out selling cigarettes on street corners.
They’re assassinated while unarmed in their cars during routine traffic stops.
They’re gunned down in their homes by uninvited police officers.
They’re driven into the pavement by overzealous security guards.
They’re demonized as mothers declaring that their murdered children’s lives mattered.
They’re publicly vilified by white presidents for silently kneeling on NFL sidelines.

Black people don’t get to wear menacing masks or flash handguns on courthouse steps or accost strangers looking like dollar store stormtroopers, in an attempt to frighten people.

In those places where they are simply and lawfully living, they are met with disapproving side-eye glances, greeted with clutched purses, and assailed by an army of terrified Karens, whose itchy text trigger fingers easily dial 911 when non-white young people congregate in a park or crowd their favorite Chick-Fil-A dining room.

This privilege has always existed, but it’s been decades since it’s been afforded this wide a berth, this long a leash, and such kid gloves from leaders. The threatening displays of white rage around the country lately, are happening with such frequency and ferocity, because participants know that they have in this president, a dedicated advocate, a willing partner, a powerful accomplice.

It’s no coincidence that in the middle of the fight to oppose stay-at-home protections by Blue governors choosing humanity over commerce, Trump tweeted out seeming non sequitur invocations to LIBERATE several cities and warned of second amendment encroachment. Though on their surface the subjects seemed unrelated to stopping the spread of the virus, these tweets were clear dog whistles for his snarling white base to suit up, strap on weapons, and provide the free muscle in his reckless push to reopen American in the throes of a pandemic, knowing they’d never be held accountable.

This is MAGA America in its dawning renaissance of outward racism, showing us what is at stake as we approach another election. We aren’t just choosing a president or party to steward us through the coming years, we’re making a statement on what we will and will not tolerate as a people.

What we witnessed in Michigan was an act of terrorism, by the very definition of the word. We have seen many such acts this week, and if November allows this malevolence another four years, they will seem tame. The self-appointed soldiers in the army of the Lord will grow more brazen and become more violent in their holy war to make America whiter—so decent white people need to resist them in the streets, on social media, and at the polls.

I fully suspect people of color will oppose this presidency in large numbers because they see the disparity.

What I hope and pray, is that more white people, especially those who claim to be Christian, will also stand to reject the supremacy and racism that yields such willful homegrown terrorism; that we will use the unearned currency of our privilege to declare this violence un-American and inhuman and unacceptable.

White terrorists can no longer have a friend in the White House—not if we really want to make America great.

John Pavlovitz is a writer, pastor, and activist from Wake Forest, North Carolina. In the past four years his blog Stuff That Needs To Be Said has reached a diverse worldwide audience. A 20-year veteran in the trenches of local church ministry, John is committed to equality, diversity, and justice—both inside and outside faith communities. In 2017 he released his first book, A Bigger Table. His new book, Hope and Other Superpowers, arrived on November 6th.