Prime Minister Serzh Sargsyan steps down amid protests, says he will not be involved in “required solutions” to unrest.

Nikol Pashinyan told a rally on Monday in Armenia’s capital, Yerevan, he is “ready to discuss conditions of Sargsyan’s resignation and transfer of power”.

“The National Assembly shall be entitled to nominate candidates for prime minister within a week. Until then, an interim government will be formed, after that snap extraordinary parliamentary elections are needed,” Pashinyan said, according to Armenian website NEWS.am.

Sargsyan resigned earlier on Monday following days of protests in Yerevan against his government, which critics accuse of corruption and authoritarian rule.

Thousands of anti-government protesters have taken to the streets since demonstrations began on April 13.

Sargsyan said he would adhere to the demands of the protesters and step down.

“[Opposition leader] Nikol Pashinyan was right. I was wrong. This situation requires solutions, but I won’t participate in them. I leave the post of this country’s prime minister,” a statement on Sargsyan’s website said.

“The movement on the streets is against my office. I will fulfil your claim,” according to the statement.

Pashinyan, who was released from police detention on Monday fewer than 24 hours after being arrested at a protest in Yerevan, had called on his supporters to launch a “velvet revolution” to remove Sargsyan from power.

Sargsyan, 63, had promised not to run for the post of prime minister having served two consecutive five-year terms as president, but was formally nominated by Armenia’s ruling Republican Party earlier this month.

Armenia amended its constitution to change the government from a presidential to a parliamentary system in a 2015 referendum, making the presidency largely ceremonial and strengthening the office of the prime minister, a position which is not constrained by term limits.

Vartan Oskanian, a former Armenian foreign minister, told Al Jazeera the anti-government demonstrations were sparked by Sargsyan renaging on a promise “not to seek any high office if the constituational change passed”.

“The prime minister, under the new constitution, has the combined powers of the president and the prime minister and that was the entire protest against him [Sargsyan],” Oskanian said.

Karen Karapetian, who served as prime minister before Sargsyan assumed office, has been appointed to the role again in an interim capacity. 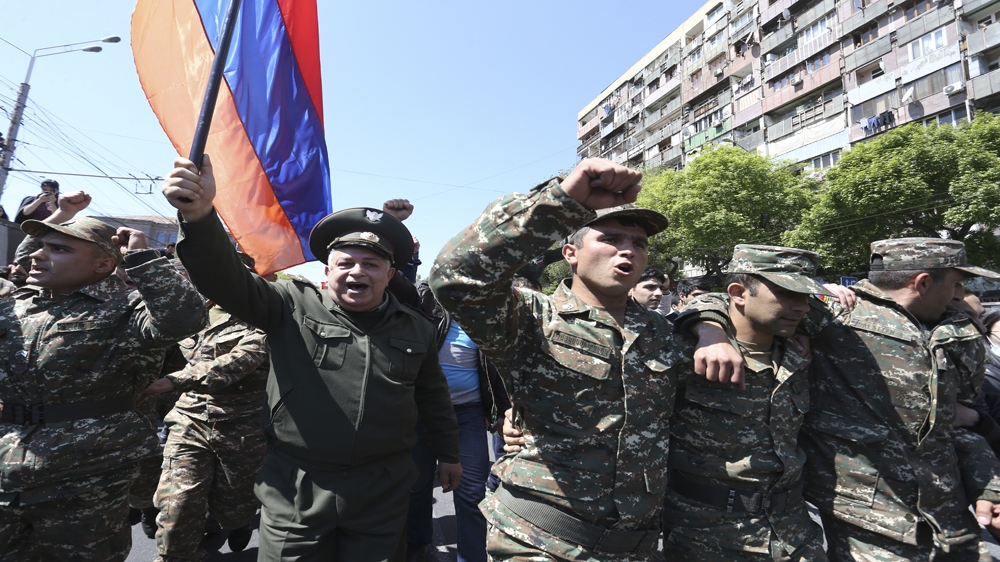 “Thousands of people are on the streets, cheering and hugging each other, jumping up and down and honking their horns … things happened so quickly, I don’t think the crowd was expecting this but it is exactly what they wanted,” Forestier-Walker said.

“We saw soldiers take to the streets, we saw priests, children and their parents, young and old coming out to show Armenia was really united in wanting these changes.”

“This is an indication of how much people in Armenia have realised that they had the power to affect change in a system that was widely regarded as corrupt.”