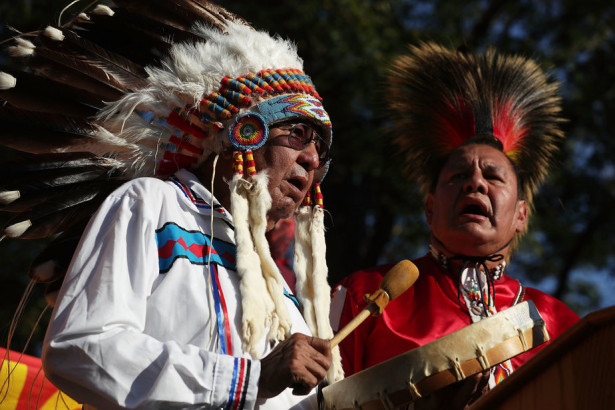 The Obama administration gave the Standing Rock Sioux tribe a partial victory on Monday, by declining to grant a final easement for a disputed section of the the Dakota Access pipeline that would skirt its ancestral land. It called, instead, for “additional discussion and analysis.”

Under sharp pressure from tribal and environmental activists, the U.S. Army Corps of Engineers and the Department of the Interior said further consultation is “warranted in light of the history of the Great Sioux Nation’s dispossessions of lands, the importance of Lake Oahe to the Tribe, our government-to-government relationship, and the statute governing easements through government property.”

The Standing Rock Sioux tribe has led a contentious, months-long protest against the crude oil pipeline that would cross the Missouri river at Lake Oahe, a half-mile upstream of the Standing Rock reservation in North Dakota. The effort has swelled into a worldwide protest movement being fought on environmental justice, indigenous rights, environmental and climate change grounds.

The move keeps the drilling beneath the river on hold as the easement’s fate is decided. But the tribe has repeatedly called for a comprehensive environmental impact statement of the entire pipeline. The administration did not address that request.

“Not all of our prayers were answered, but this time, they were heard,” Standing Rock chairman David Archambault II said in a statement.

The 1,172-mile pipeline would carry roughly a half-million barrels of crude oil per day from the Bakken oil fields of North Dakota to Illinois. The vast majority of it is already built.

The Army Corps permitted construction under the Missouri river in July when it completed a basic environmental assessment that found the pipeline would have no significant impact on the river or adjacent federal land. But it did not grant the final easement required for the river crossing.

That decision was expected earlier this fall, but in a surprise move on Sept. 9, the Obama administration called for an internal review of its environmental assessment. Monday’s announcement was the result of that review.

Dakota Access LLC, the company building the pipeline announced last week that it had completed construction on both sides of Lake Oahe, and that it was mobilizing equipment to tunnel under the river in anticipation that the Army Corps would grant the company the easement it required.

“Dakota Access Pipeline has waited long enough to complete this pipeline,” Kelcy Warren, chief executive of Energy Transfer Partners said in a statement. “Dakota Access Pipeline has been granted every permit, approval, certificate, and right-of-way needed for the pipeline’s construction. It is time for the Courts to end this political interference and remove whatever legal cloud that may exist over the right-of-way beneath federal land at Lake Oahe.”

The industry group MAIN Coalition said in a statement the Army Corps’ decision is “yet another attempt at death by delay and is a stunning rebuke of the Army Corps of Engineers, the federal civil service, four state governments, and the rule of law. Americans expect their government to play by the rules—and this is just another example of the Obama Administration using its perceived authority to drive a political agenda.”

President-elect Donald Trump, an investor in Energy Transfer Partners, the parent company of Dakota Access LLC, is expected to approve the project when he takes office, if it is not already approved.

The Obama administration may be trying to negotiate a solution that would address the tribe’s concerns about the project’s impact to its drinking water supply and cultural sites, while still allowing the project to move forward.

The Missouri River is the main source of drinking and irrigation water for the 3,600 square-mile reservation and its 8,200 residents, 40 percent of whom live below the poverty level. The U.S. Environmental Protection Agency estimated that oil from a spill at that Missouri River crossing could reach the tribe’s drinking water intake pipe at Fort Yates, the tribal headquarters and county seat, within several hours.

The Army Corps  is calling on the tribe to engage in discussion about potential conditions that “would further reduce the risk of a spill or rupture, hasten detection and response, or otherwise enhance the protection of Lake Oahe, the tribe’s water supplies, and its treaty rights.”

More than 300 demonstrations are planned for Tuesday in a nationwide protest against the project, many of them in front of Army Corps offices.

“We call on all water protectors, as we have from the beginning, to join our voices in prayer and to share our opposition to this pipeline peacefully,” Archambault said.