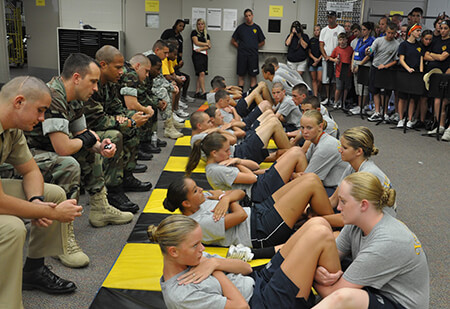 The U.S. Army wants a 500,000 active-duty force by the end of this next decade, about 25,000 more than today. And preying on low income high schoolers is apparently how they intend to do it.

This past month the Army announced that they have already surpassed their recruitment goals for 2019–with three months still to go. That a big change from recent years’ where unsuccessful recruiting outcomes have been the norm. So what changed?

Recruiters are no longer using patriotism as their main marketing strategy. And wars in the Middle East are not on the talking points either.

Maj. Gen. Frank Muth, head of Army Recruiting Command, stated this past month that discussion of the endless wars and their potential outcomes “was not really part of the discussion” recruiters are having with high schoolers. Today, recruiters have found a new niche to meet their 2019 goals: the national student debt crisis.

“One of the national crises right now is student loans, so $31,000 is [about] the average,” Muth told reporters at the Pentagon. “You can get out [of the Army] after four years, 100 percent paid for state college anywhere in the United States.” The Army has refocused their marketing efforts to take advantage of our national education and financial crisis.

It is noteworthy that it’s also being reported this past month that the Trump Administration has been blocking an independent watchdog agency, the Consumer Financial Protection Bureau, from investigating student loan servicers’ shady business practices with the other federal possibility for college access.

The Public Service Loan Forgiveness Program, which began in 2007, is intended to offer public sector workers (teachers, firefighters, nonprofit workers, . . . ) forgiveness of their student loans after ten years of service and timely payments. Instead it is being reported that 99% of those applying for this new program are being denied.

This loan forgiveness program was intended to offer another way for those committed to civic duty to be able to afford college – without joining the Army. Instead the program is being blocked while the Army manipulates the national student debt crisis. Extreme economic inequality continues to expand in the U.S. and low-income youth increasingly are forced to consider joining the Army in order to reach their dreams of college, a living wage and joining the middle class.

Youth should not have to become soldiers in order to attain higher education.