Arrests: Forests Are For Picnics Not For Pipelines

Massachusetts – It was a beautiful day for picnics in Otis State Forest on Saturday, as the non-violent direct action group Sugar Shack Alliance hosted a large public rally at Lower Spectacle Pond in Sandisfield, Massachusetts. As the rally was happening, an entirely different kind of picnic, a well-coordinated act of civil disobedience was unfolding along the construction easement of the $93 million Kinder Morgan Connecticut Expansion pipeline project, culminating in 22 arrests. 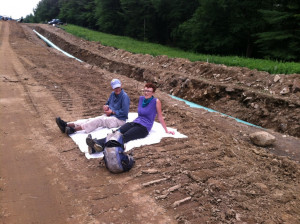 Despite the temporary police closure of Cold Spring Road, about 80 people gathered at 10:00 a.m. at the glistening Lower Spectacle Pond to reaffirm the need for solidarity against fossil fuel infrastructure across the country. Speakers included Susan Baxter, an affected Sandisfield land-owner; Anthony Melting Tallow and Karyn Redwolf; Martha Klein from the CT Sierra Club; and Ian Jackson of the Green Party. Singer-activists Sarah Stockwell-Athen with The Hoping Machine and Ben Grossman rounded out the morning program.

To set the tone for the day, Anthony Melting Tallow embedded the MA-based resistance into the context of hundreds of years of extractive industries that devastated his community near the Tar Sands in Alberta, Canada. Grim as the history was, he urged the crowd not to lose hope or to give in to despair, saying “nothing is lost – it can’t be”.

While he was speaking and in the same spirit of resilient resistance, twenty-two activists hiked  through fields and woods to emerge at  four different points along the path of pipeline construction. As they arrived on the easement, they spread out picnic blankets over a mile-long stretch of the easement and hung banners that read “This is our protected state forest” and “Picnics Not Pipelines”. These actions blocked construction access roads, surveying equipment, and the laying of pipe, for well over an hour before state police arrived on the scene and began making arrests. 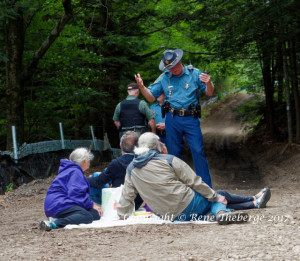 “It is our job to delay and impede the pipeline for as long as we can,” said Kevin Young, one of the arrestees. Like the speakers at the rally, Young saw the day’s events as part of a much larger context, adding, “I think of this pipeline in terms of its global impacts as much as its local ones. There are people suffering more than we are [from the impacts of fossil fuel infrastructure]. The least we can do is to be in solidarity with them.”

At the conclusion of the rally, participants were invited to a concert and potluck lunch. Musical guests for the day included Bomba de Aquí, Tom Neilson, Ben Grosscup, The Expandable Brass Band, Dave Lippman, Amy Nicolina, and Sandy Pliskin – many of whom donated their time and talents to the cause.

Elizabeth Caretti-Ramírez, Sugar Shack Alliance  member and lead organizer of Saturday’s rally, recapped the day, “We  brought together people from across our region, celebrated our resistance, and educated each other.

“I left with a feeling of enormous hope.”