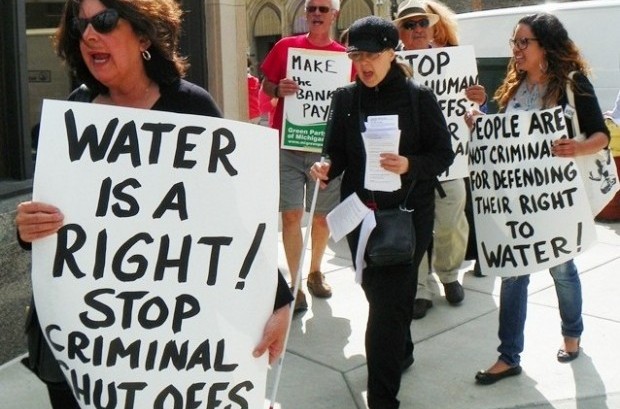 Here is what Steve Neavling of the Motorcity Muckraker reports:

About 10 protesters arrested at rally today over Detroit water shutoffs.

Police arrested about 10 protesters this morning after opponents of massive water shutoffs in Detroit locked hands and blocked the entrance to a company hired to turn off the utilities of tens of thousands of delinquent residents. Police began making the arrests as the human blockade stopped a red pickup truck from entering the Homrich Inc. facility on East Grand Boulevard. The city is paying the company $5.6 million to handle shutoffs for two years.

Among those arrested were pastors and seniors, who were placed in the backs of police cars and hauled off. Some were dragged by police for refusing to move.

Protesters said tens of thousands of residents are delinquent on their water bills because they can’t afford them. Water is a human right, they said.

The city said the water system is hemorrhaging money and delaying much-needed repairs because of nonpaying residents.

And here is a statement from the Council of Canadians:

Ottawa – The Council of Canadians condemns the unwarranted arrests of Detroit residents who protested water cut-offs on the morning of July 10th. The residents blocked the entrance to Homrich Wrecking Inc., the company contracted to shut-off residential water service.

“We are shocked to hear that residents acting to make sure their neighbours have drinking water were arrested this morning. We stand in solidarity with the Detroit residents asserting one of their most basic human rights,” says Maude Barlow, national chairperson for the Council of Canadians. “In a region that holds 20% of the world’s freshwater, the water cut-offs are a source of growing international outrage.We’re urging President Obama to step in and stop the cut-offs.”

Last month, Caterina de Albuquerque, the Special Rapporteur on the Human Right to Safe Drinking Water and Sanitation, confirmed that people should not be cut off from their water and sanitation services because they cannot afford to pay their bill

In March 2014, the Detroit Water and Sewerage Department announced it would begin shutting off water ser­vice for 1,500 to 3,000 customers every week if their water bills were not paid.

The Windsor-Essex chapter of the Council of Canadians is organizing a solidarity action on July 24 by bringing 1000 litres of water to Detroit residents to draw attention to the blatant violation of the human right to water and sanitation.