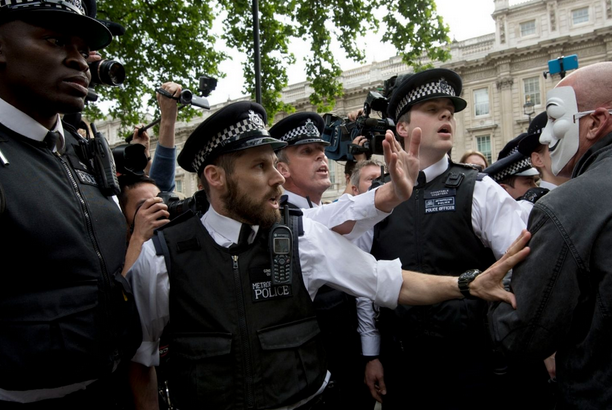 Thousands of anti-Tory protesters have taken to the streets to show their fury with the most right-wing Queen’s Speech in a generation.

At least five were arrested as pockets of trouble flared in London today, where union leaders, students and left-wing MPs blocked streets and chanted slogans.

Although most of the demonstration was peaceful, there were scuffles between police and some protesters.

Some were knocked or held to the floor as tensions flared, with those around them shouting: “F*** the police”.

One crowd of protesters was seen blocking the part of a police van with its sirens on as they shouted: “You killed Mark Duggan.”

And a group mobbed UKIP’s only MP Douglas Carswell calling him ‘racist’ and ‘fascist’ – an experience he said was ‘terrifying’.

He was led by a large group of officers to safety in a police van after the incident outside St James’ Park tube station.

He said it was “out of nowhere, a mob over 100 strong, and it got incredibly nasty. I mean this was a lynch mob on the streets of London.

“It was an incredibly violent nasty mob and I was shocked.

“It wasn’t just the words that were aggressive, they had pretty murderous intent.

The group spoke after the Queen unveiled 26 Bills for the next year amid pomp and ceremony in the State Opening of Parliament.

The crowd was smaller than the 7,000 people who said they’d attend on Facebook, furious at welfare cuts, strike curbs and an immigration crackdown.

But the national secretary of The People’s Assembly, which helped organise today’s protests, said there were 2,000 at the protest’s height in Whitehall.

Sam Fairbairn told Mirror Online: “Obviously people are very angry at the moment in terms of what the government is doing.

“The Queen’s Speech made it very clear that the government is attacking the poorest in society again.

“They’re attacking trade union rights, cutting £12bn from welfare and ending social housing as we know it with the Right to Buy.

“There were other protests across the country today. The aim is to put so much pressure on this government that they can’t stay in power for 5 years.

“This is a nasty government and they’re doing things that Thatcher couldn’t dream of.

“I think they’ve underestimated the kind of anger that’s going to kick off over the next months and years.”

At least five people were arrested during protests today.

The first two, aged 28 and 35, were arrested over an ‘imminent breach of the peace’ during the Queen’s Speech itself in Parliament Square, and soon released.

A third man aged 45 was arrested because he was wanted on suspicion of violent disorder in Whitehall during previous protests when the Tories won power.

A 17-year-old youth was arrested on suspicion of assault on police.

The fifth suspect, a man, was arrested on suspicion of violent disorder and possession of an offensive weapon.

A spokesman declined to tell Mirror Online the force’s estimate of how many people were involved.

The protest assembled before 5pm and lasted several hours, peeling off into different groups who eventually converged back outside Downing Street.

Demonstrators were still outside the Prime Minister’s residence at 9.30pm.

He told the crowd Trident nuclear weapons should be scrapped and said: “Keep the spirit of that world you want to live in – not the nasty divided one we’re in.”

But critics said the crowd were trying to overthrow a democratically elected govenrment.

Protesters are now gearing up for a national demonstration on June 20 at the Bank of England.