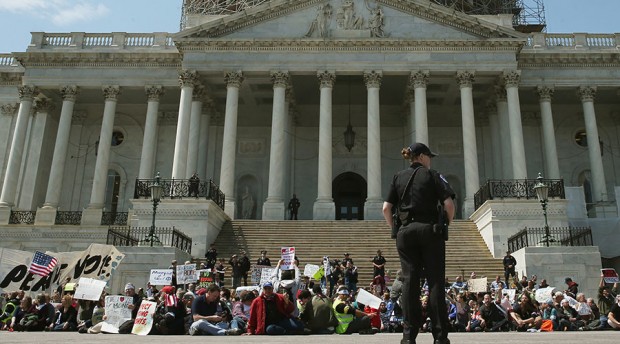 Hundreds of Americans, many of whom are elderly, marched in support of political reform in Washington, DC, taking part in a sit-in and risking arrest as they pushed for fairer elections. RT’s ‘Redacted Tonight’ host Lee Camp was one of those detained.

Already, multiple arrests have been made, according to reports from those on the ground near the demonstrations.

According to RT’s correspondents, police have started releasing some of the protesters. The sit-in comes one day after more than 400 people were arrested for participating in what has been termed the ‘Democracy Spring’ movement. The organization has planned for 10 days of demonstrations and mass sit-ins at the US capitol, with day two highlighting efforts from older Americans who want to see change.

Hundreds of elders marching on US Capitol for #DemocracySpring in #DC, dozens risking arrests pic.twitter.com/FOnRDpGWAv

“As ‘elders’ we have a moral imperative to care for and speak for future generations,” the Democracy Spring website reads. “We aim to use our wisdom and life experience to guide our actions, and stand together to create our legacy and reclaim our democracy.”

“Every voice is needed to speak up and say what we know is true – that a thriving and just democracy is the path towards a sustainable world for all children, for all life.”

Today is mostly elders sitting in for arrest #DemocracySpring pic.twitter.com/DxrFSYin8a

As protesters marched on the US capitol, many elderly Americans held signs and chanted slogans such as: “Democracy is not for sale, [we’re] not too old to go to jail.”

Hundreds of #DemocracySpring activists chanting “Democracy is not for sale, we’r not too old to go to jail” pic.twitter.com/86xOsmNKyW

I’m not dead yet; I care deeply; I vote,” read another sign held by a demonstrator.

Social media users have reported seeing dozens of police officers out to keep an eye on the protesters and make arrests.

Octogenarians being arrested for #DemocracySpring! If they can stand up against this corruption, we all can. pic.twitter.com/wpVXlWTIig

As part of its movement, Democracy Spring is pushing lawmakers to pass legislation that would boost the power of small campaign contributions, offer public funding for political candidates, and update the Voting Rights Act of 1965 in order to protect minority and lower-income voters at the polls.

The group is also calling for a constitutional amendment that would essentially overturn Supreme Court rulings giving corporations the ability to freely spend in elections. The amendment would end “the big money dominance of our elections and allows for Congress and the States to set overall limits on campaign spending, including prohibitions on corporate and union spending in the political process.”

#DemocracySpring brought chairs for Elders sit-in at the US Capitol pic.twitter.com/EhxxosFFKb

Additionally, Democracy Spring wants to see Congress hold hearings and vote on filling the vacancy on the Supreme Court. The group does not have a position on whether President Barack Obama’s nomination of Judge Merrick Garland should be approved, but it does want the Senate “to fulfill its constitutional duty to hold hearings so that the American people may learn more about his positions on campaign finance and voting rights and, ultimately, take an up or down vote on the nominee.” The mainstream media has not covered the event, even ignoring protesters as they blocked Speaker of the House Paul Ryan (R-Wisconsin) from arriving at a press conference he had scheduled at the Republican National Committee headquarters on Tuesday afternoon.

Sit in at the other exit also #DemocracySpring RNC pic.twitter.com/epe1RJrsiL

Protesters in the alley outside where @SpeakerRyan is speaking pic.twitter.com/VXay9TQnBL