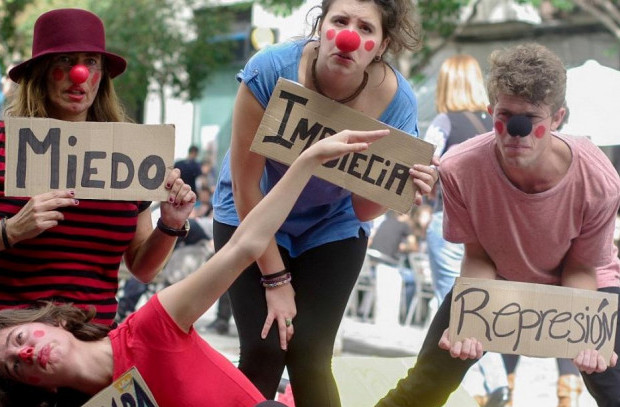 Above Photo: Members of No Somos Delito (We Are Not a Crime) staging a street performance with placards that read: “fear”, “impotence”, “repression”, “justice”. (Doris Gutiérrez)

“With the 15M movement the need arose to develop innovative ways of protesting and fighting in order to rally indignant citizens who were not activists, people who were ready to take to the streets but not in the traditional way. That is when the collective imagination emerged to mobilise them,” recalls Mónica Hidalgo, spokesperson for No Somos Delito, literally ‘We Are Not Crime’ in English.

This citizens’ platform bringing together over 100 collectives came into being in 2012 in response to the first draft of the Penal Code reform, immediately followed by the Ley de Seguridad Ciudadana (Public Safety Law), both of which came into effect in July 2015.

“Our objective is to secure the repeal of these laws known as the Gag Laws,” Hidalgo tells Equal Times. It is an objective that has become more viable since the recent approval in Congress of a motion to this end, put forward by the PSOE.

“Our theatre group has been one way of reaching non-activists, a way of getting the message across to them about the implications of the Gag Laws. It has staged many performances in the street, in the metro, 15M assembly spaces and occupied (spaces), parodying the absurdity of it but also its repressiveness. This has helped us to reach people that are not activists ready to take part in acts of civil disobedience but who do want to do their bit,” she explains.

But the “star action” of the No Somos Delito collective was the Holograms for Freedom demonstration, “estimated to have reached over 800 million people,” adds the spokesperson.

“It broke our media ceiling in Spain and around the world. We even managed to have the New York Times criticise the Gag Laws, although it didn’t help much, as they weren’t amended,” comments Hidalgo. “But at least it made the government more careful about how it would apply them, because the world is aware that these laws exist.”

Actions like those Hidalgo describes have gone from having a daily presence in the media to virtual silence.

“First of all, out of weariness. For four very intense years, people were very active and, ultimately, we didn’t see any major change. Then there was the emergence of [the political group] Podemos, raising hopes like ‘they’re reaching the institutions and they’re going to change everything’. The so-called ‘city councils of change’ are those bringing no change, in many cases. In Madrid, for instance, the way the liberated and occupied spaces are being treated is quite reprehensible,” denounces Hidalgo.

In addition to the factors highlighted by the No Somos Delito spokesperson, the disappearance of spaces where the collectives and movements born out of 15M used to meet has also been decisive.

“They were arenas of citizen empowerment, places for us to meet, create, share and use the collective imagination to fight. In 2016 alone, in Madrid, Patio Maravillas and La Morada were evicted and many others, such as La Enredadera, are under threat. They stop you from holding assemblies, demonstrations, in short, collective construction. In unity there is strength, but because there is no longer a social centre providing a common meeting space, there is no unity in our calls for action or our fights…

“What’s more, the interaction there was between collectives boosted our creative capacity: if someone had an idea and we couldn’t make use of it, the PAH (Mortgage Victims’ Platform) could, for example. When you see other people who are as indignant as you, it empowers you, it encourages you to take part.”

Lehman Brothers went bankrupt in the spring of 2008 but it was three years before the demonstration that would give rise to the 15M movement. Taking inspiration from a soleá, Flo 6×8, a group of artivists (neologism combining the words artist and activism) emerged, using flamenco as the tool for their fight.

“The bursting of the financial bubble was raising concern, as was the housing bubble that was brewing in Spain,” one of its members, ’Moody’s’, tells Equal Times. “We use aliases as a precaution because of the legal problems our actions could bring us,” he explains. “But we also want to have an educational role, that’s why I decided to use the name of one of the big credit rating agencies,” he adds.

At the end of 2010, they entered a branch of Santander Bank dancing the Banquero (Banker) Rumba Rave.

“Facebook censored it, alleging it violated the privacy rights of the people appearing in the video. And that gave rise to the Streisand Effect,” explains Moody’s. “When we started, the banks were being ‘naturalised’ and it was a mistake. We wanted to expose their real role in plunging people into debt. We wanted to reach the masters, not the foremen, as we say in Andalusia,” he continues.

“Then – as a result of the constituent movement and the recuperation of the institutions generated by 15M – we made an exception with the action in the Andalusia parliament – when flamenco singers burst into song during the proceedings. 15M meant a before and an after,” insists the artivist.

“We chose flamenco as our language not only because we love it but for its power to express, its power to voice dissent, irreverence and rebellion. It is the music of choice among the oppressed, the lower classes, contrasting with official culture. On dancing, the movement of the bodies fosters a biopolitics of resistance,” he explains with fervour. “Our performances inspire the most empowered and provide them with the tools to intervene, a know-how in hostile environments. But they are not just performances, they contribute innovative elements to the traditional action of social movements,” he underlines.

“A return to the streets”

“The great expectations generated by parliamentarism in the wake of the 15M movement sent social movements into a slumber. The Gag Law has also helped. And Podemos has absorbed the most mobilised people, who have gone from the street to working in the Congress and the Senate,” says Moody’s.

As regards the future, the spokesperson of No Somos Delito is hoping that “some or other spark will fly” with the new executive, since “it is palpable on the streets that something is going to start moving. The movements have been waiting to see how the political situation would pan out. And they have seen that the elections haven’t solved anything,” she says.

“Now the government is going to apply the cuts demanded by Brussels, cuts that it hasn’t been able to implement for a year, as it has been a caretaker administration. I trust that people will not remain passive, otherwise we’ll have to apply for asylum in some other country,” she says, laughing.

“There is going to be a return to the streets. The first big demonstration of this term of office – following Rajoy’s swearing in, with the abstention of the PSOE – marks the start of a new era. We have learnt our lesson: the parliamentary route can be there but our presence on the street must continue,” ensures Moody’s.

“The most important thing is to work towards a change of political culture in this country, because part of the population – the older people – is resisting it. They live detached from the digital culture and all it entails,” concludes the artivist.