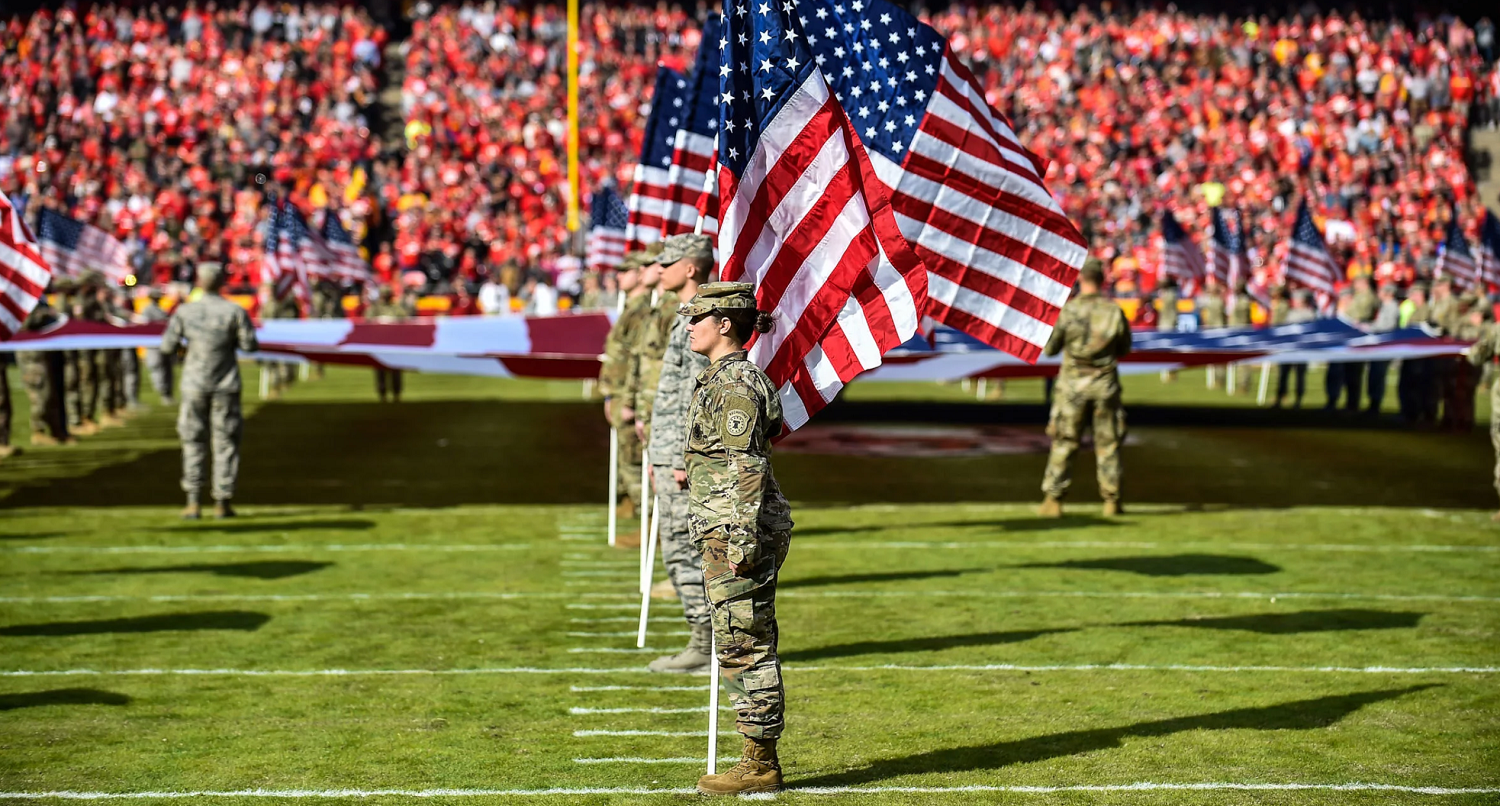 As A Veteran, I Refuse To Celebrate War

Above photo: Members of the Armed Forces hold flags on the field during the national anthem ceremony prior to a game at Arrowhead Stadium on November 11, 2018, in Kansas City, Missouri. Jason Hanna / Getty Images

As a veteran who is also an antiwar activist, I find Veterans Day to be a toxic holiday. On Veterans Day, we are asked to ignore all the horrors of U.S. militarism for the “sake” of the veteran — all this despite the fact that trillions of dollars have been diverted from education, health care, infrastructure and even veteran support in order to pay for the U.S. military. That military overthrows governments, surveils the planet, covers up sexual assault, slaughters millions, and pollutes more than any other organization.

Veterans Day is a not-so-subtle attempt to justify the mission of the U.S. empire by setting aside a day that demands a certain degree of reverence for those who have carried out that mission. Veterans Day is also a tool to recruit more soldiers. The underlying message of the Veterans Day pageantry is: If you too serve the cause of the empire and make it out alive and reasonably “sane,” you will be patted on the back on Veterans Day. You may even make it onto the field or stage at professional athletic events or concerts. You may see your name on the Jumbotron!

There is one catch that veterans or would-be veterans must adhere to though: toe the empire’s line and don’t question the mission publicly, or else you won’t qualify for such public adulation.

Now, the clock is ticking on a burning planet, and it is time to tell the truth about one of the largest polluters in history, the U.S. military. We can’t afford to waste more time telling lies about or even ignoring what has motivated the American empire, or celebrating those who have done the empire’s bidding — not even for a single day. Yes, many veterans enlisted in the military thinking that they were indeed serving a noble cause, or hoping to escape poverty, or to pay for college. Unfortunately, good intentions at this stage are no substitute for good politics. Students should never have to choose between going off to war and proper health care or education, which is why the fight for universal health care and free education is a huge threat to U.S. imperialism.

Those who care about equality and justice have no use for Veterans Day, as it is currently defined. Recently, an increasing number of states and communities are replacing Columbus Day with Indigenous Peoples’ Day, making it a day to celebrate Indigenous peoples, not conquest and genocide. Likewise, Veterans Day needs to be expropriated and redefined to celebrate veterans of a different sort: It’s time to change Veteran’s Day back to Armistice Day, making it a day to celebrate those who struggle for justice and peace.

Armistice Day was established on November 11, 1919, to commemorate the end of hostilities in World War I. Armistice Day was sacred because it was intended to evoke memories of fear, pain, suffering, military incompetence, greed and destruction on the grandest scale for those who had participated in war, directly and indirectly. On the 11th hour of the 11th day of the 11th month, people around the world, wearing white poppies to symbolize peace, would fall silent for two minutes and reflect on the destruction many had witnessed and engaged in, resolving never to repeat the horrors of war. Armistice Day was a hallowed anniversary because it was supposed to protect the future life from future wars.

However, on June 1, 1954, less than a year after the U.S. exited the Korean War in defeat, the U.S. Congress got rid of Armistice Day and established Veterans Day. In place of what had been a celebration of peace, Congress instituted an annual veneration of those who had fought in war.

Veterans Day, instead of looking toward a future of peace, celebrates war “heroes” and encourages others to dream of playing the hero themselves, covering themselves in valor. Becoming a “hero” means going off to kill and be killed in a future war – or one of our government’s current, unending wars.

Veteran’s Day celebrates war and Armistice Day celebrates Peace. We should reinstitute a day to honor peace. In fact, there are efforts underway to do just this: Veterans for Peace, for instance, organizes marches, rallies, letter-writing campaigns, poetry readings, and appeals to elected officials demanding the change.

Not only should we get rid of Veterans Day entirely, we should go a step further and begin to celebrate veterans of the fight for social and economic justice on November 11.

Let November 11 be a day we celebrate veterans, not of endless bloody war, but of the struggles for peace and equality. If the U.S. military uses Veterans Day as a way to bring more soldiers into their ranks, we too need a day to recruit more members into the movements for racial, gender and climate justice, the fights against empire and for liberation. Why not celebrate ordinary people who fight for true justice on November 11?

Veterans of every type of social justice movement would be honored. Everyone who has marched in the street for better paying jobs, or immigrants’ rights, or clean water could be recognized as a veteran in the noble fight for human dignity and life.

This may sound idealistic or even unnecessary — after all, most of the people I know who are doing what really needs to be done to make the world a better place aren’t looking to be celebrated. However, the U.S. empire needs be challenged at every turn. We need to do the opposite of what it asks of us. If the empire asks us to celebrate war, we must celebrate peace, justice and solidarity. Let us reclaim Veterans Day, call it Armistice Day and honor those who fight the good fight.

Rory Fanning walked across the United States for the Pat Tillman Foundation in 2008-2009, following two deployments to Afghanistan with the 2nd Army Ranger Battalion. He is a housing and antiwar activist living in Chicago, Illinois. He is also the author of Worth Fighting For: An Army Ranger’s Journey Out of the Military and Across America (Haymarket Books, 2014). Rory’s writing has appeared in the Guardian, The Nation, Mother Jones, Salon, Common Dreams, TomDispatch, Socialist Worker and many other outlets. Follow him on Twitter: @RTFanning.