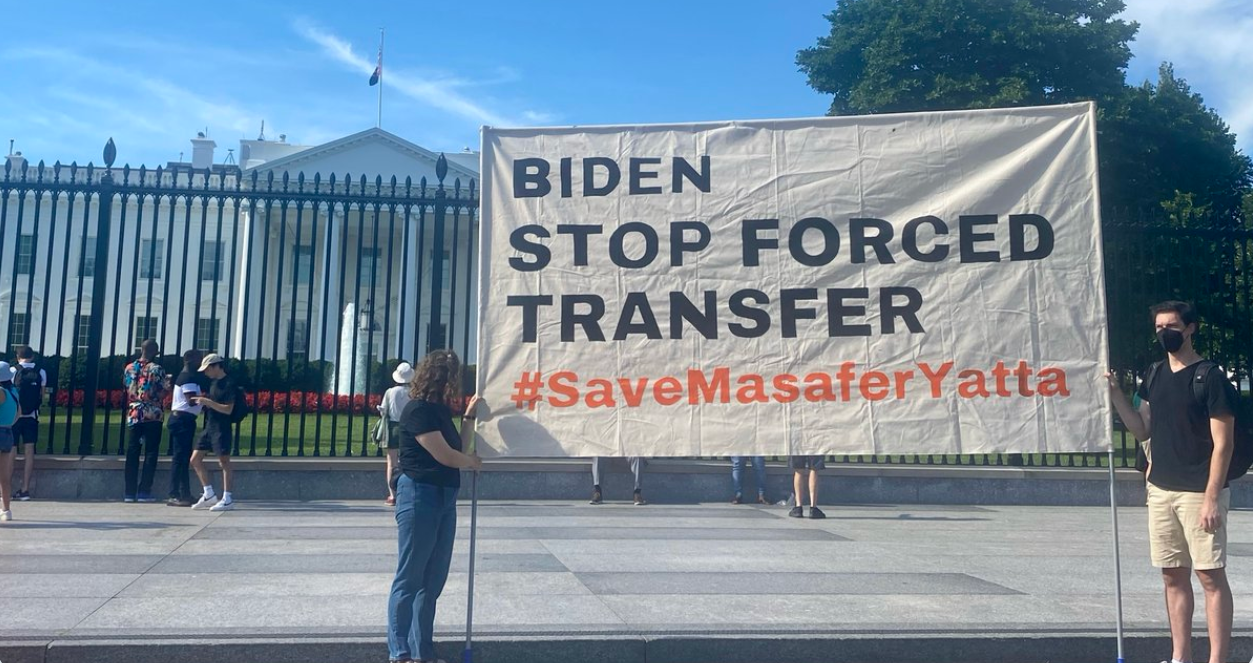 Washington, D.C. – On the first day of President Biden’s visit to the Middle East, young Jews affiliated with IfNotNow Movement gathered outside the White House to deliver a message amidst President Biden’s complicity in home demolitions and the potential forced expulsions of over 1,000 Palestinians in the Masafer Yatta region of the occupied West Bank. Standing in front of the White House, protesters unraveled a banner that said “Biden, Stop Forced Transfer, #SaveMasaferYatta”. Biden’s trip to Israel, which began this morning, does not include engaging with communities in Masafer Yatta or any Palestinian community under threat of demolition or forced transfer paid for with U.S. tax dollars.

Our U.S. tax $ would pay for the destruction of entire homes and villages. #SaveMasaferYatta pic.twitter.com/0dey3qRR5N

“President Biden says that he cares about human rights for all people, but his agenda in Israel would make Donald Trump proud. His refusal to condemn the imminent forced transfer of thousands of Palestinians in Masafer Yatta is deeply disappointing. Our U.S. tax dollars would pay for the forced transfer in Masafer Yatta, and Biden has the power to stop it from happening.” Elianna Cooper, IfNotNow DC Spokesperson

Earlier this week, a group of prominent liberal Jewish organizations including the Union for Reform Judaism and J Street submitted a letter urging Biden to speak out against the destruction of Masafer Yatta, and in two different letters almost 100 congress members have also demanded Secretary Blinken apply pressure to save Masafer Yatta. The pressure to save Masafer Yatta comes after an Israeli Supreme Court ruling from earlier this year declared that an area in the Masafer Yatta region called Firing Zone 918, an Israeli military practice area since the 1980s where thousands of Palestinians live, can have its Palestinian residents forcibly transferred at any moment.

Ali Awad, a Palestinian activist from the village of Tuba in Masafer Yatta who is under threat of being pushed out of his home, shared that “Israel is evacuating thousands of us here in Masafer Yatta, demolishing our homes, and depriving us from the main services that we need. Meanwhile, Israeli illegal outposts inside Masafer Yatta are connected to resources and are not under imminent eviction. Settlers in these outposts commit violence against neighboring Palestinians in the area, and work in tandem with the Israeli military to steal our resources and expel us from our homes.”

To intimidate residents of the region, the Israeli government has been holding military exercises in the region with tanks and explosives, and is running a census in the region as a pretense to enter communities and show their force. Without international pressure, it is very likely that these residents will be forced out of their homes. U.S. political pressure played a crucial role in preventing the destruction of other Palestinian communities such as Susiya and Khan-al Ahmar, and American Jews were an important constituency supporting political pressure in those moments.

“We can and we must unite as American Jews to reject a vision of American security that invests in weapons and bulldozers instead of schools and affordable housing, and to demonstrate that real allyship to Jews from the Biden administration means supporting and protecting the human rights of everyone in the region — with no exceptions.” Elianna Cooper, IfNotNow DC Spokesperson.