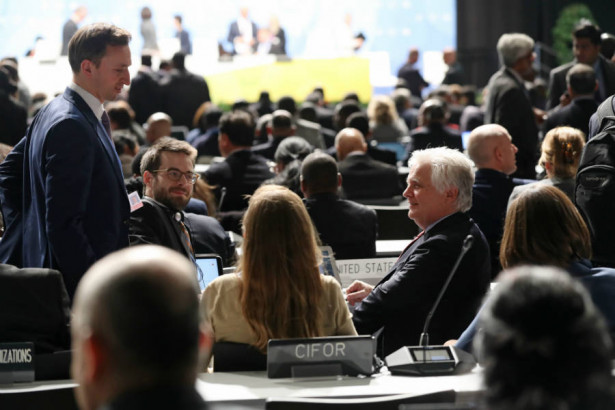 The Trump administration’s push for expanding fossil fuel use is at odds with its own National Climate Assessment.

As global climate talks resume this week, the U.S. is straddling a climate credibility gap, with the Trump administration’s policies on one side of an abyss and what the government’s own scientists know about climate change with increasing certainty on the other.

The disconnect became more evident last week as the administration published, but then basically shrugged off, a comprehensive report on the state of climate science.

Written by authoritative government and academic experts, then honed by the extreme vetting of a formal National Academy of Sciences peer review, the latest volume of the National Climate Assessment paints a stern and explicit picture of the risks of climate change.

The report’s executive summary pronounced that temperatures have reached the warmest point in human civilization, that our own actions are the cause, and that the worst is yet to come.

Meanwhile, the Trump administration and its Republican allies in Congress remain wedded to an expansion of fossil-fuel energy that the science says is at the root of the problem.

In recent weeks, they have moved to: repopulate the Environmental Protection Agency’s science advisory board with faces friendlier to its pro-industry cause; issue a tax bill that undermines renewable energy and fosters oil, coal and gas; expand drilling and mining from the Arctic to the Gulf of Mexico; and rejigger the calculations of how much greenhouse gas emissions will cost society. They sent a stripped down team of bureaucrats to the climate talks without much of an agenda other than to preserve the role of fossil fuels in the decades ahead, which the science warns will lead to crises.

What the Science Shows Is Necessary

The credibility gap can be captured in a simple concept, affirmed by every scientific authority: to limit the planet’s warming, emissions of carbon dioxide have to be brought rapidly to zero.

To keep the globe within 2 degrees Celsius of warming since the dawn of the industrial age, the government’s new climate assessment confirms, emissions of greenhouse gases need to reach net zero by 2080. To keep it within safer limits of 1.5 degrees, the ambition of Paris, that needs to happen by 2050.

By now, these and the other detailed conclusions of the NCA are so widely accepted by scientists that they should come as no surprise.

The first public draft of the report delivered essentially the same messages last December; an academic review clarified and endorsed them in the spring, and a leaked, all-but-final draft of the report a few months later made clear that there was no backing away from them.

Katharine Hayhoe of Texas Tech, one of the main authors of the NCA, began a thorough Twitter thread dissecting the findings with this conclusion: “The time to act is now.”

The sense of urgency is driven by the carbon budget numbers. For some time, it has been plain that time is running out for fossil fuels.

The NCA report presented the details which, within the normal bounds of uncertainty, are as follows:

“There is broad consensus that the further and the faster the Earth system is pushed towards warming, the greater the risk of unanticipated changes and impacts, some of which are potentially large and irreversible,” the NCA concluded.

How the Trump Administration Is Responding

The Trump administration reacted in a perfunctory statement by a deputy press secretary mouthing a denialist meme: that the climate is “always changing.”

That sound bite trivializes the latest authoritative data—such as that in the World Meteorological Organization’s newly issued State of the Climate 2017 report. WMO’s bullet points: this is the warmest year ever except for a few El Nino peaks, and the past five years were the warmest ever; ocean heat is at record levels; sea ice is well below average at both poles; September’s hurricanes shattered records; sea level rise continues, as does ocean acidification; and of course the blanket of carbon dioxide that’s causing it all is growing.

That is the reality. But as the rest of the world gathers in Bonn for the latest round of talks on how to confront the crisis—by increasing everyone’s efforts to reduce emissions—Washington is going the other way.

“Facts, and even the safety of the people he pledged to protect, don’t seem to matter to this president,” concluded Paul Bledsoe, a climate policy expert and lecturer at American University, in an op-ed published in The Hill.