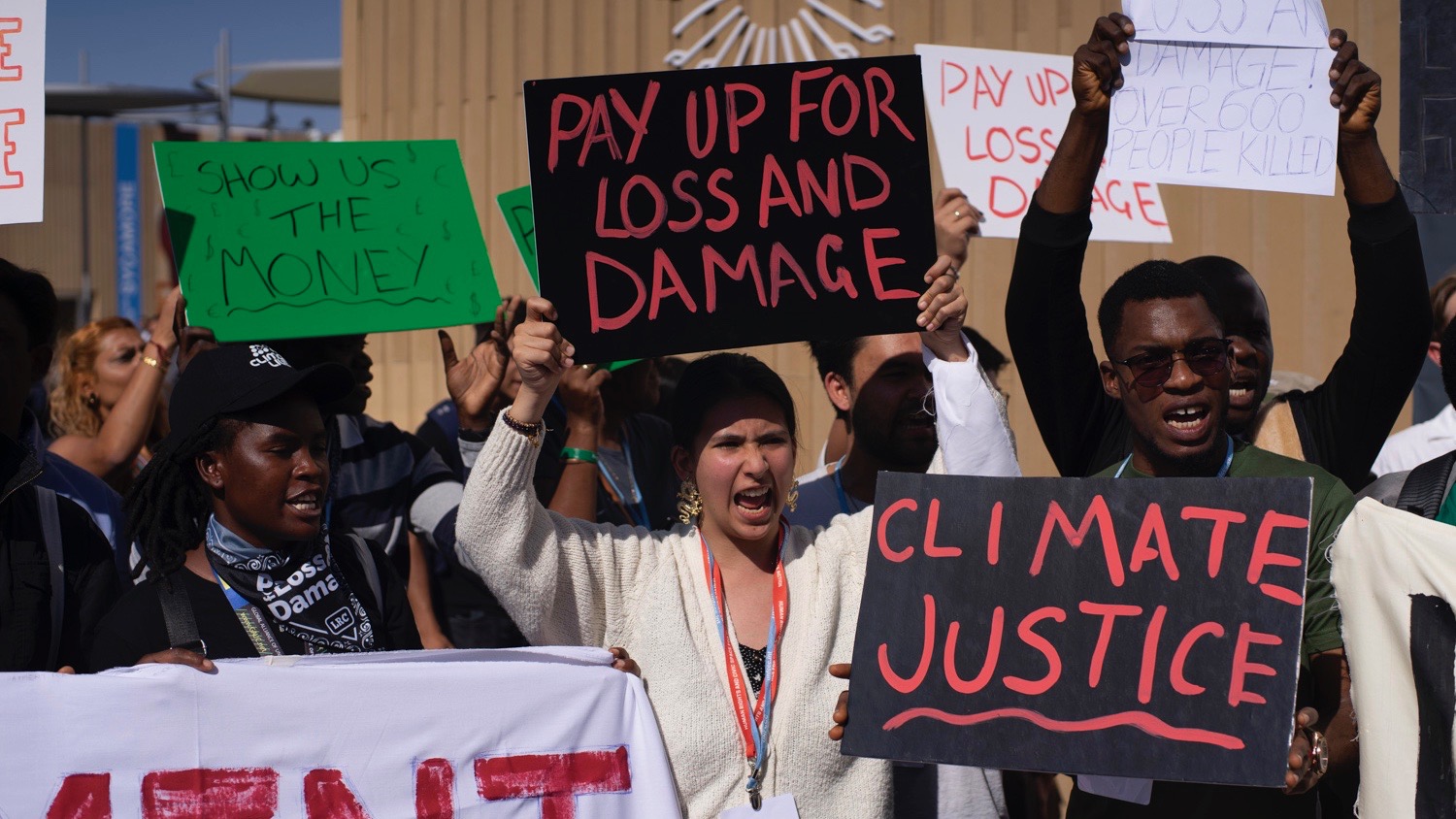 At COP27, Global South Calls On North To Get Serious About Climate Funding

As the “technical” week of the UN climate conference in Egypt draws to a close, poorer countries have reiterated their expectations that COP27 will end with a dedicated finance facility for Loss and Damage, something which has been blocked at previous COPs.

As the UN climate change conference COP27 progresses in the Egyptian city of Sharm el-Sheikh, Wednesday, November 9, was observed as “Finance Day.” Climate financing for adaptation and mitigation, as well as funding for enduring Loss and Damage caused by adverse impacts of the climate crisis, have occupied center stage at this year’s summit.

Loss and Damage funding is officially included on the agenda for the first time in COP history, albeit with important caveats and not without struggle. “This item and the outcomes thereof are without prejudice to the consideration of similar issues in the future,” reads a footnote to the agenda item.

The outcomes do not involve liability or compensation, and include the Glasgow Dialogue on Loss and Damage – a three-year process established at COP26 after the US and the European Union (EU) blocked a stronger and much more urgent proposal by the G77 and China for a Loss and Damage (financial) Facility (LDFF) as part of the summit’s Financial Mechanism.

The Glasgow Dialogue was set up in an “open, inclusive, and non-prescriptive manner,” meaning that it has no mandated outcome. However, vulnerable countries including the Alliance of Small Island States (AOSIS) and the G77 and China had clarified that they expected the Dialogue to lead to the setting-up of an LDFF at COP27. The demand has been reiterated at COP27.

“Enhanced solidarity and cooperation to address loss and damage is not charity – it is climate justice,” stated Pakistan’s Permanent Representative to the UN and current chair of the G77 and China, Munir Akram, during his address this week.

During the first informal talks on loss and damage on November 8, Ecuador noted that conversations around loss and damage had focused only on the private sector, and were limited to insurance mechanisms. Under the UNFCCC, insurance-based solutions have remained dominant despite evidence that they do not serve the needs of poorer and more vulnerable countries and can be prohibitively expensive.

Ecuador added that loss and damage finances had to be “public and grant-based,” and urged that a fund be set up at COP27, informed by the principle of equity and common but differentiated responsibilities (CBDR).

In a key development, the Community of Latin American and Caribbean States (CELAC) also issued a joint statement on November 9, calling for “fair, transparent, and equitable” multilateral climate finance architecture, re-emphasizing the principle of CBDR. The statement also called for the promotion of “innovative climate financing instruments,” including debt swaps for climate action. Colombian president Gustavo Petro had also outlined debt-for-investment swap arrangements in his speech.

As negotiations proceed, the 2022 High Level Ministerial Dialogue on the New Collective Quantified Goal (NCQG) on climate finance was also held on November 9. The target is to be set by 2024, and will replace the $100 billion per year financing goal that was set for global North countries in 2009.

Not only has the existing target repeatedly not been fulfilled, global South countries are now pushing for more funding that is proportional to the growing scale of climate crisis and adaptation costs.

A report commissioned by the UK and Egypt, presented at COP27 this week, stated that ‘developing’ countries excluding China would need approximately $2 trillion per year by 2030 to curb greenhouse emissions and cope with the climate crisis.

Speaking at Wednesday’s meeting, India’s delegation stated, “The mobilization of resources needs to be led by the developed countries and should be long-term, concessional, and climate-specific with equitable allocation between adaptation and mitigation projects.”

The need for concessional funding for vulnerable countries was also articulated by Prime Minister of Barbados Mia Mottley during her address at the opening of the World Leaders Summit.

Additionally, there has also been a sustained push to include Loss and Damage as a distinct “third pillar” of the NCQG, alongside adaptation and mitigation. While adaptation tends to focus on “resilience,” loss and damage measures include “being able to adequately plan for responding to occurring climate impacts,” “active response measures,” and “ensuring that after either extreme or slow onset climatic impact[s], countries can continue pursuing a long-term sustainable development.”

A negotiator attending Wednesday’s NCQG ministerial dialogue told Down To Earth that the ‘developed’ countries had resisted committing to a particular figure for the funds, deeming it a part of “political” discussions and not the “technical” talks taking place this week.

Informal negotiations were also convened on a report by the board of the Adaptation Fund (AF) which was set up under the Kyoto Protocol in 2001. Speaking on behalf of the Africa Group, the South African delegation denounced that resource mobilization had remained a  “systemic failure.” Lack of adequate funding was also emphasized by representatives of the Alliance of Small Island States, the Least Developed Countries (LDCs), Independent Alliance of Latin America and the Caribbean (AILAC), and China and India.

Informal consultations around the fourth review of the AF featured disagreements around mentioning “doubling the collective provision of climate finance for adaptation” for ‘developing country Parties’ as urged in the Glasgow Climate Pact. The US called for the deletion of the phrase altogether. The US, Canada, and the EU also objected to the inclusion of a specific reference to the $174.6 million in outstanding pledges to the AF.

Talks are also ongoing to operationalize the Santiago Network for Loss and Damage which was established at COP25 held in Madrid in 2019 to provide technical assistance to climate vulnerable countries. At COP26, Germany pledged to provide $10.1 million to the SNLD. The UK government also pledged to provide $5.8 million.

Despite the magnitude of the crisis, funding pledges announced by rich countries this week have failed to bridge the gap. Austria has pledged $51 million over the next four years to address loss and damage. Scotland, which was the first country to offer loss and damage funding in the form of a symbolic $2.3 million at COP26, has pledged an additional $5.8 million.

Three other European countries – Belgium, Denmark, and Germany – have also committed to loss and damage financing. As global South countries push for immediate climate finance, perhaps one of the most noticeable absences is that of the US, the world’s largest historical emitter of greenhouse gasses.

On November 9, US climate envoy John Kerry announced a carbon trading market initiative, “the energy transition accelerator”, in partnership with the Rockefeller Foundation and the Bezos Earth Fund. Carbon offsetting has been widely criticized as a “false solution,” allowing polluters to simply “greenwash” their actions without actually committing to cutting emissions, and at the expense of vulnerable rural and Indigenous communities.

“Carbon markets are not climate finance,” denounced ActionAid analyst Kelly Stone. “The US cannot avoid or duck their climate finance obligations to developing countries through the creation of carbon market programs or blaming things on domestic politics.”

The announcement was also rejected by Rachel Cleetus from the Union of Concerned Scientists, who argued that there was “no substitute” for the “real public finance” that vulnerable countries actually need.

Kerry went on to say, “Everyone is upset because the $100 billion target hasn’t been fulfilled completely… when I got 90-something on a test at school, I thought I did pretty well.” The reality is that the $100 billion per year pledge has not reached “90-something” even now, and it is not expected to be fulfilled before 2023.

Not only that, in 2020, the “true value” of climate finance provided to poorer countries was one-third of the reported contributions.

“The US has for decades acted in bad faith with regards to loss and damage, but the delays and deception have real life consequences,” stated Harjeet Singh, global political strategy head at Climate Action Network International (CAN) “We need to agree on a funding facility at this COP so we can work on making it operational by 2024, and the US needs to change from being obstructive to constructive.”

While participating countries and climate justice advocates are steadfastly focusing on holding wealthy countries accountable, attention has also been drawn to the responsibility of fossil fuel corporations in the global North.

“How do companies make 200 billion dollars in profits in the last three months and not expect to contribute at least 10 cents on every dollar of profit to a loss and damage fund?” Prime Minister Mottley had asked.

Amid calls for a windfall tax on energy companies making huge earnings from the energy crisis, analysis by Global Justice Now has revealed the extent of reparations fossil fuel corporations might owe to the global South.

The organization’s report states that the “Big 5” oil companies – Chevron, ExxonMobil, BP, Shell, and TotalEnergies – who have made $170 billion in profits in 2022 alone, are collectively responsible for 11.38% of global historic CO2 emissions.

The figure is “28 times more” than the collective emissions of the Least Developed Countries bloc.

Global Justice Now estimates that the Big 5 could be collectively held responsible for loss and damage up to $64.9 billion per year to the global South by 2030, and up to $3.1 trillion by 2050.

If mitigation is also factored in, the figure could swell up to between $7.8 to $8.6 trillion by 2050 for these five corporations alone.