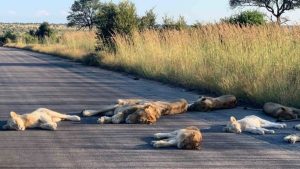 CNN photo (4/17/20) of lions taking advantage of the shutdown to take over a road in South Africa.

Last week on April 22 the world marked the 50th anniversary of Earth Day. Air pollution in the world’s major cities was down dramatically; for the first time in decades, the Himalayan Mountains could be seen from 100 miles away. The canals in Venice were so clear you could see the fish swimming in them, and lions were sleeping on the roads in South Africa. All of these developments, and others like them, were the consequences of a global reduction in fossil-fuel emissions.

Alas, none of this is the result of popular political pressure to finally bring fossil-fuel capitalism to heel. It is, rather, a byproduct of the economic shutdowns and travel restrictions that have been put in place by most nations in order to slow the spread of the novel coronavirus. Still, amidst so much death and fear, the Earth’s resilience has been a symbol of hope and a source of joy, if a melancholy joy, for many.

Also last week, for the first time in history, the price of oil fell to below zero as suppliers were willing to pay to have it taken off their hands. The oil market collapse, of course, is caused by the same public health measures that have helped the planet heal: Demand for oil has plummeted. In environmental terms, falling demand for oil is the best news since…well, let’s just say long before sliced bread.

Conversely, it has never been clearer that demand for oil = bad news for the planet and its inhabitants. To put this in perspective: Covid-19 has killed 200,000+ to date; air pollution kills an estimated 7 million people annually.

But if you’re looking for corporate media to celebrate the good news of the drop in demand for oil, you will be disappointed. Heck, you won’t even find an acknowledgement of the tradeoffs of oil demand and planetary health in last week’s breathless coverage of the unprecedented market collapse. And forget any analysis about the possibilities of directing government aid to conversion to renewable energy sources.

Correcting the market, breaking the planet

On the contrary. I looked at last week’s news coverage of the oil market collapse in four leading corporate outlets: New York Times, Washington Post, CNN and PBS NewsHour. Not a single piece included mention of the positive effects of decreased fossil fuel use, even as these outlets ran separate feel-good pieces about animals roaming free.

On the PBS News Hour (4/21/20), a piece that promised a “closer look” at the oil market plunge lamented that “no one is consuming energy at the rates they used to,” treating this as a problem to be fixed: “Until that corrects itself,” it explained, the industry’s woes would continue. From an amoral supply and demand perspective without context, obviously falling demand is bad for a market; but to talk about increasing fossil fuel consumption as a correction, when we know that it is precisely that consumption that is destroying the planet, is irresponsible if not immoral. 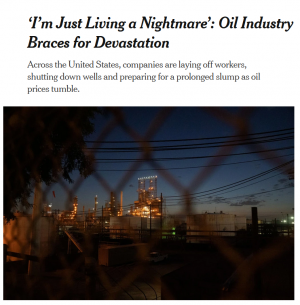 For the New York Times (4/21/20), the devastating “nightmare” is that people are burning much less oil.

The New York Times ran several articles on the industry last week, and honestly, it was hard to tell them apart. I’m tempted to do a Freudian analysis of the word choices in “‘I’m Just Living a Nightmare’: Oil Industry Braces for Devastation” (4/21/20). The industry “braces for devastation.”… The planet is already experiencing devastation. One industry executive worried that “the current disorderly market has adversely damaged the industry.”… No word on the damage to the environment. He talked about “unsustainable” prices…. Crickets from the paper of record on unsustainable oil consumption. Another oil executive said, “The future is very cloudy right now”…unlike the skies, which are clear for the first time in decades. (Italics added.)

In “What the Negative Price of Oil Is Telling Us” (4/21/20), the Times reassures us, “The good news is… the oil will still be in the ground once the economy starts to recover.” Lest you misunderstand this good news as a “keep it in the soil” idea, let me clarify that from the oil industry/New York Times point of view, “will still be in the ground” is good news because they can continue to get it out of the soil—contrary to every scientific warning about the need to stop extraction immediately.

More of the same

As these corporate news organizations sought to reassure their audiences that eventually the oil industry will “correct” itself, the only solutions on their horizon were temporary production cuts and government subsidies so that business as usual could resume once the crisis ends (again, the “crisis” being a global decline in fossil-fuel consumption). Conveniently forgotten is the reality that business as usual is the real problem for the planet and its inhabitants.

“Shutting down oil wells and then restarting them when demand returns can require expensive manpower and equipment. Fields do not always recover their former production,” the New York Times (4/20/20) said in explaining why even now, when there is an unprecedented oil glut, companies continue to drill. The article went on to say, “The oil industry’s plight is forcing policymakers to consider intervening more forcefully.” It’s taken for granted here that fields recovering their former production is the goal. Intervening “forcefully” here means temporary government-enforced production quotas—not, say, ending further drilling and subsidizing renewable energy development. 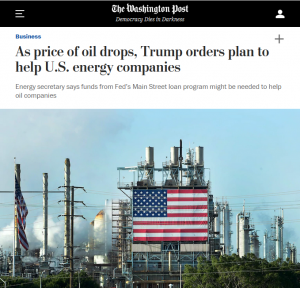 Despite literally wrapping oil production in the flag, this Washington Post piece (4/21/20) was the only story we found across four outlets that quoted a climate justice advocate on the fall in oil demand.

Over at the Washington Post, it was clear that government intervention also means federal bailouts for the industry (“As Price of Oil Drops, Trump Orders Plan to Help US Energy Companies”—4/21/20). Trump has ordered his administration “to come up with a plan to provide federal assistance to the oil and gas industry,” it reported. Apart from passing mention that the assistance might come from the Fed’s small business loan program, there is no discussion of what such assistance might look like—or whether any conditions might be attached to it.

If the oil industry needs government assistance to survive, then this is a once-in-a-generation opportunity to use that unique leverage to correct energy policy that is literally killing the planet. The government ought to be prohibiting all future drilling and offering significant subsidies to energy companies on the condition that they keep their workers on payroll and transition entirely to renewable energy sources.

This isn’t rocket science, as they say; it’s obvious. The failure of corporate media to make any mention of such a redirection of investment is appalling.

(By the way, this Post article was, as far as I can tell, the only piece in the four outlets that included even a single quote from a climate justice advocate: Greenpeace staffer Jack Shapiro, who was critical of a federal bailout of fossil-fuel industries.)

At CNN (4/16/20), it was more of the same: discussion of falling demand as a “crisis” (“Global Oil Crisis: Bottom of the Barrel Is Still Unclear”), and resumption of pre-coronavirus consumption levels as “recovery.”

The neoliberal lock on our imagination 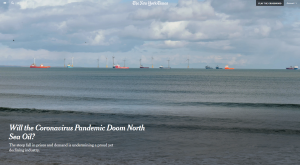 The New York Times (4/22/20) wrote a eulogy for the “proud but declining” industry of North Sea oil.

In “Will the Coronavirus Pandemic Doom North Sea Oil?”—published April 22, the 50th anniversary of Earth Day—the New York Times (4/22/20) wistfully described “a proud yet declining industry” and the impact of falling oil prices on communities like Aberdeen, Scotland. Once again, the narrative horizon extends no further than understanding demand for oil as a positive:

“Demand will come back, but it won’t come back fast,” said Mike Tholen, director of sustainability at Oil and Gas UK, which represents the North Sea industry. “We may be in an era of having seen peak oil demand,” he added. Analysts say that governments will likely continue to promote measures to tackle climate change by cutting carbon-dioxide emissions, which means reduced demand for oil.

This piece illustrates some of the fallout for communities and regions from market shifts like the current oil crash—jobs lost, ripple effects on other industries, declining tax revenue, etc. Ultimately, these are human costs of economic upheaval, and the way they have played out in our global capitalist economy thus far is invariably brutal and unfair.

This reality makes the refusal to look beyond continued investment in oil all the more infuriating, baffling—and depressing. The paucity of imagination on display in the corporate coverage of last week’s oil market crash is ultimately a reflection of the continued economic, political and ideological power of neoliberalism.

Which brings us back to the clear skies and reduced air pollution. Since the planet’s reprieve is an unintended side effect of Covid-19 public health measures, rather than the outcome of redirected political priorities and economic investments, it has been treated as a quirky byproduct that must be temporary, even if it is charming in some ways.

The “crisis” of falling oil demand is, ironically, a self-inflicted capitalist wound. The same unfettered corporate power that has driven global warming has given us the coronavirus crisis: the commodification of rights and goods that should never be commodified—in particular, in this instance, for-profit healthcare; gross economic inequalities stoked by white supremacist and patriarchal ideologies; and political priorities that ignore social goods and starve the government infrastructures needed to respond to the viral outbreak. In the absence of adequate public health responses, massive physical distancing—and its economic consequences—has been the only way governments have been able to even partially limit illness and death.