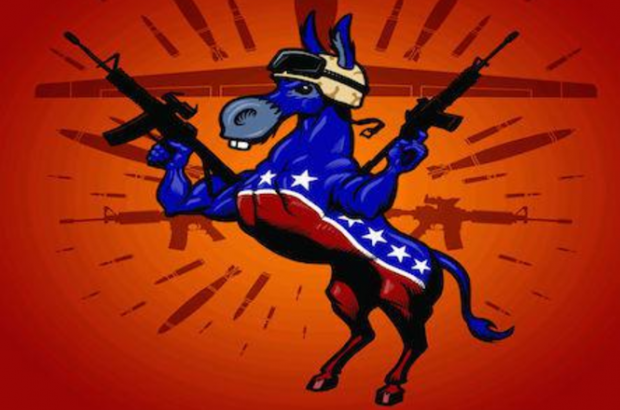 As Democrats Press For War, Left Must Demand Peace And Social Transformation

The Democrats are whipping up war hysteria and “cynically seeking to harness people’s well-founded fears of Trump’s domestic policies in order to sabotage the possibility of a relaxation of international tensions.” Some folks have taken the bait. “Leftists that think they can exploit the split between the Trump troglodytes (fascists) and the Obama/Clinton/Old Line GOP War Party (fascists) will ultimately wind up caught in a pincer between the two.”

“The Left’s job is to oppose the warmongers, not band with them.”

As is ordained by law, at the end of the week much of President Obama’s legacy will become Donald Trump’s powers, including the power to detain Americans indefinitely (forever) without trial or charge, an authority the First Black President secured from Congress in 2011. Obama’s wars become Trump’s wars, which, if Trump follows Obama’s example — and if he succumbs to the furious pressures of leading Democrats, old line Republicans and an openly aggressive and “politicized” national security establishment — will be expanded and multiplied. The most imminent threats to human survival under a Trump presidency flow, not from the billionaire’s own belligerent instincts and unpredictability, but from the momentum of Obama’s policies of ever-escalating confrontation with Russia and China — his deliberate “pivots” towards brinksmanship on all the geopolitical fronts of Empire.

“U.S. policy is to militarily intimidate the world into submission — a gangster’s game.”

It is the Democrats that have whipped up war hysteria and a new McCarthyism, attacking Trump from the Right to force him to keep Obama’s imperial “surge” moving forward. With western economic power fading fast, U.S. policy is to militarily intimidate the world into submission — a gangster’s game. For the Lords of Capital and their national security servants, Obama’s greatest achievement was to put the U.S. back on the offensive after George Bush’s defeat and humiliation in Iraq. From their perspective, Obama has already “Made America Great Again” with his “humanitarian” military intervention doctrine, trampling every principle of international law, including the sovereignty of nations, in Libya and Syria. Trump’s talk of “deal-making” with Russia and China threatens to slow the imperial offensive.

The ruling class realignment that congealed in the Clinton campaign’s Big Tent sees any relaxation of U.S. military pressures against Beijing and Moscow as a prelude to imperial collapse. For them, de-escalation is an existential threat. They don’t give a damn about the damage Donald Trump intends to inflict on what remains of the U.S. social safety net — and neither did Obama, who came into office scheming to forge a Grand Austerity Bargain with the Republicans. And, if his preventive detention bill were not enough, Obama’s support for creation of a “Ministry of Truth” — officially, a joint governmental commission to police the media for “foreign disinformation and manipulation” — screams out to high heaven that protection of civil liberties is not part of their agenda, either. Internet publications like Black Agenda Report, cited by the Washington Post as “fake news” and “minions” of Russia, will be punished for deviance from imperial “exceptionalism” and aggressive war policies.

“Trump’s talk of ‘deal-making’ with Russia and China threatens to slow the imperial offensive.”

This is all about war. The Democrats, massed corporate media and the fully mobilized legions of spooks and disinformation specialists are cynically seeking to harness people’s well-founded fears of Trump’s domestic policies in order to sabotage the possibility of a relaxation of international tensions. Leftists that think they can exploit the split between the Trump troglodytes (fascists) and the Obama/Clinton/Old Line GOP War Party (fascists) will ultimately wind up caught in a pincer between the two.

The ruling class is, indeed, in an acute political crisis, to match its larger, systemic crisis. The duopoly system that has served the rich so well for most of the history of the Republic has come undone, split at the seams, endangering the corporate-imposed national “consensus” on empire and war. The War Party, deploying every disinformation trick in the book, foments anti-Russian hysteria to create a mass base for its imperial agenda. They point fingers at phantom “minions” of Moscow in order to make leftists into political foot soldiers of the Pentagon, Langley and the military industrial complex. MoveOn.org moves to their beat, as does the entire Congressional Black Caucus, including Barbara Lee (D-CA), the nation’s most left-leaning congressperson. Fine; they are duty-bound to go down with the Bad Ship Hillary. But the social movement activists that allow themselves to be swept up in the Democrats’ offensive-from-the-Right against Trump are the biggest dupes of all.

“They point fingers at phantom ‘minions’ of Moscow in order to make leftists into political foot soldiers of the Pentagon, Langley and the military industrial complex.”

The Democrats are incapable of agitating for anything more than defense of Barack Obama’s “legacy” — chiefly, his doomed Affordable Care Act, which was already disintegrating from its own contradictions and whose final demise will create an acute crisis that cries out for single payer health insurance, the outcome Obamacare was designed to forestall. The Left should be making that demand right now, rather than helping Democrats join with Republicans to patch together an even worse private-based system, down the road.

The precariat economy that is emerging from Obama’s post-Meltdown restructuring, in which 94 percent of the new “jobs” are so contingent, inadequate and insecure they can hardly be called jobs at all, demands a National Minimum Income – a potentially transformative leap that the Left should be loudly championing, right now.

Five years after Occupy Wall Street, the Left should finally call for the nationalization — not fragmentation — of the big banks, and creation of a public development bank to rebuild the national infrastructure without going into debt to private capital. Anybody that doubts masses of people will join in this demand doesn’t know their fellow Americans and their deep hatred for Wall Street banks.

“The social movement activists that allow themselves to be swept up in the Democrats’ offensive-from-the-Right against Trump are the biggest dupes of all.”

Ferguson set the new Black movement on a course of confrontation with the Mass Black Incarceration State, in all its manifestations. Obama’s legacy — and that of the Black misleadership class that has collaborated with mass Black incarceration for two generations – is to intensify intelligence gathering in Black communities, while dispersing Black population concentrations through gentrification. Trump or no Trump, there is no avoiding the logic of the movement’s central grassroots demand: Black community control of the police. Non-Blacks on the Left must support that demand.

There is no such thing as a genuine Left that supports imperialism, but there are plenty of fakers that do, including phony socialists. How sad — and maddening, at the same time — that a Donald Trump can speak of “cutting down” on “regime change,” while purported leftists rally to Obama’s “humanitarian” military interventionism, the lip-stick on the imperial pig. The Democrats want war so badly, they are fouling their bourgeois institutional nest and bearing down hard from the Right to prevent any let-up in tensions with Russia and China. The Left’s job is to oppose the warmongers, not to band with them.

There is no mystery to what the moment demands. What’s needed is Left movements for social transformation, not a farcical, Democrat-led anti-Trump pseudo-movement, whose real agenda is war.