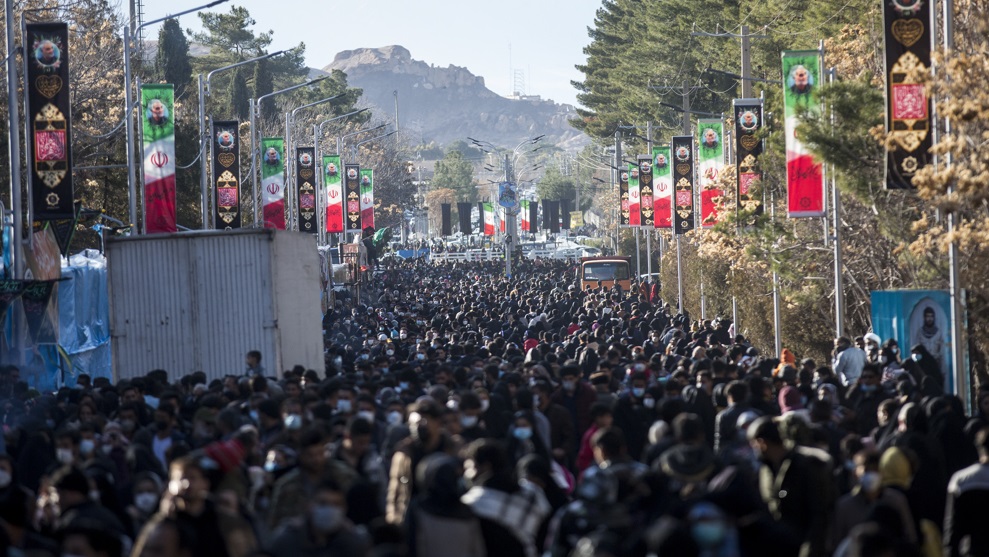 Above Photo: A mobilization on the anniversary of the assassination of Qasem Soleimani in his home town of Kerman. Press TV.

Mobilizations were held across Iran on Monday on the second anniversary of the assassination of major general Qassem Soleimani.

He was killed in a drone attack sanctioned by then US president Donald Trump.

Thousands of Iranians took to the streets on Monday, January 3 to observe the second anniversary of the assassination of major general Qassem Soleimani. The largest procession was taken out in his hometown in Kerman. Iranian president Ebrahim Raisi also addressed the nation on the occasion and demanded a fair trial of former US president Donald Trump and his associates for the assassination.

Calling the assassination a terrorist act which had implications on international peace and security, Iranian ambassador to the UN Security Council, Majid Takht-Ravanchi wrote a letter to the chair of the council asking it to “live up to its charter based responsibilities and hold the United States and the Israeli regime to account for planning, supporting and committing a terrorist act,” Press Tv reported.

Qassem Soleimani and Abu Mahdi al-Muhandis, deputy chief of Iraq’s Popular Mobilization Forces (Hashd al-Shaabi or PMF) were killed in a US drone strike on January 3, 2020 near the Baghdad airport. The drone strike was sanctioned by then US president Donald Trump. It was later revealed that Israel had aided the act.

The people who gathered to mourn the death of Soleimani also chanted slogans against American imperialism and its allies in the region. Iraqi president Barham Salih also issued a statement paying tribute to Muhandis and Soleimani, citing their “bravery to defeat the most brutal attack that IS embodied with its malicious plans,” Iraqi News Agency reported.

Soleimani and Muhandis had played a leading role in the fight against the Islamic State (IS) group in Iraq and Syria between 2015 and 2017. Soleimani was a key figure in Iran’s diplomatic and military engagements in West Asia. He also provided crucial assistance to the Syrian government in its fight against internationally-backed rebel forces.

The Donald Trump administration had justified the assassination calling Soleimani a terrorist. It also claimed that he was responsible for the death of hundreds of US soldiers and was also involved in planning an attack on the US. Iran has rubbished these allegations, pointing out that the US action was due to fear of its rising influence in the region.

The assassination was also part of the so-called ‘maximum pressure campaign’ launched by Trump against Iran following his withdrawal from the Iran nuclear deal.

Iran responded to Soleimani’s assassination by launching a missile strike on the Ayn al-Asad airbase in al-Anbar in Iraq province where hundreds of US forces were stationed. Though no US soldier was killed, the strike is believed to have been a factor in pushing the US to reconsider its presence in the country.

The attack also led to massive mobilizations across Iraq. These protests demanding the withdrawal of foreign troops led the Iraqi parliament to pass a resolution demanding the same

In the subsequent months, the US was forced to re-deploy many of its soldiers as attacks by Iraqi militia increased. The US had around 5,000 soldiers in Iraq apart from hundreds of other foreign troops in the country. Most of the foreign troops and half of the officially declared number of US troops have already left the country and rest are also under pressure to leave.

Iran also responded diplomatically with a massive campaign against the presence of foreign troops in the region and demanded their complete withdrawal claiming that there cannot be peace in the region as long as they remain.

It also initiated a trial in the assassination and after initial investigation, issued arrest warrants against Trump and several officials of his administration in June 2020 demanding that Interpol carry out the arrests. Raisi, in his address on Monday called Trump a “murderer and criminal” who must face trial for violating “sovereignty of Iraq and assignation of an entire nation,” Press Tv reported.

In May 2021, Iran alleged that Israel had provided crucial assistance in Soleimani’s assassination which was later confirmed by Israel’s former head of Israeli military intelligence major general Tamir Hayman.