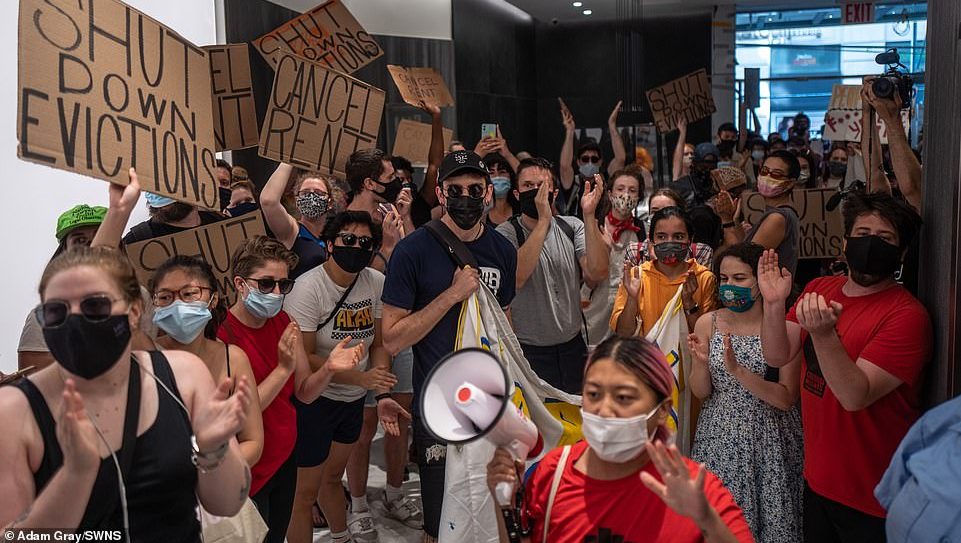 Above photo: Protesters storm inside Stern & Stern landlord attorneys building as they call for a ban on evictions and cancellation of rent. The Daily Mail.

With as many as 14,000 families potentially facing eviction, New Yorkers took to the street in Brooklyn on Wednesday. They marched right into the offices of landlord attorneys and into the Brooklyn Borough Hall.

Dozens of New Yorkers marched through the streets of Brooklyn Wednesday morning before entering two landlord attorney firms buildings and Brooklyn Borough Hall calling for a ban on evictions and cancellation of rent in the Big Apple.

Fears are mounting over how many residents will manage to keep a roof over their heads as dismal research released at the end of July revealed almost half of New York renters were unable to pay rent.

Concerns have been exacerbated further by the reality that jobless Americans will now lose out on the $600-per-week enhanced unemployment benefits from the federal government if a new coronavirus stimulus bill is not urgently reached on Capitol Hill.

A separate protest was held in Manhattan Wednesday calling for an extension to the enhanced benefits that many desperate residents need.

New Yorkers were especially hard hit by the pandemic as the state – once the virus epicenter – endured a longer and stricter lockdown than others and thousands lost their jobs overnight when businesses shuttered back in March.

There are steps that the courts could take to slow or halt the evictions. David Brand of the Queens Daily Eagle writes:

A state measure known as the Tenants Safe Harbor Act protects tenants who prove they were financially impacted by the COVID-19 economic fallout, but does not apply to renters whose eviction cases were settled pre-pandemic. Their fate rests with the state court system, which can extend the moratorium, or with individual judges handling each case, further fueling the uncertainty.

“We have no idea what the judges will do,” said Make the Road New York housing attorney Aura Zuniga.

“14,000 households are hanging. It would really be a crisis on many fronts if they lost their homes,” added Judith Goldiner, the top attorney in Legal Aid’s Civil Law Reform Unit. “I’m really worried. And I don’t know what the court is going to do.”

Landlords may be able to begin serving eviction warrants on Aug. 6, which means marshals could in theory execute evictions two weeks after that. But Queens Housing Court Supervising Judge Lansden said he does not expect tenants to get kicked out of their homes that quickly.

“I do not believe that we will see evictions occur two weeks from Thursday,” Lansden said, adding that he expects that the state Office of Court Administration or Gov. Andrew Cuomo will act to once again stay evictions.

For the second time in two weeks, Lansden told the Eagle that the situation was marked by uncertainty, for tenants, landlords and even jurists. “I dislike this phrase, but right now, it’s a fluid situation,” he said.

“I cannot tell you what’s going to happen tomorrow, much less two weeks from Thursday,” Lansden continued. “We are recognizing the court system can’t simply do nothing. We are recognizing the city of New York can’t be at a standstill, but you can rest assured that OCA is proceeding as cautiously and slowly as possible.”

Tenants’ attorneys have suggested that judges could calendar tenants’ final orders to show cause — last gasp attempts to stop evictions — weeks or months into the future to give renters some more breathing room to find a new apartment. Lansden said that was up to the individual judge.

“Each judge can operate in their own way,” he said. “We try to make things appropriate for the situation we’re dealing with and I have no idea what the situation will be.”

Some officials and attorneys have speculated that the state may require landlords to file a motion or take some other action in order to enforce eviction warrants, which would prolong the process and give tenants another chance to fight displacement in court.

New York City has identified the 14,000 families facing eviction and reached out to them to provide information about free legal services, according to the Department of Social Services.

“We’ve been sending targeted mailers this summer to tenants we identified may be at risk and are continuing that outreach, making New Yorkers aware of the resources available to them,” said DSS spokesperson Isaac McGinn. “In these unprecedented times, as our City reopens and New Yorkers get back on their feet, helping New Yorkers remain stably housed is our top priority.”

The impact of COVID-19 has not only prevented many tenants from paying their rent, it has also stopped people who can make their monthly payments from finding new apartments.

Landlords often agree to give tenants a certain amount of time to get their arrangements in order before forcing them to leave.Tenants whose cases were adjudicated prior to the March 16 suspension of proceedings would have found new homes by now, said Goldiner, of Legal Aid.

But COVID has prevented many New Yorkers from venturing outside their homes to hunt for apartments. Brokers were also barred from showing apartments until June.

“They were supposed to move, they could have moved, they agreed to move, but all of a sudden they couldn’t,” Goldiner said. “In the past, relatives or friends would have put them up, but now with the pandemic, people are scared.”

“A lot of folks are going to be homeless for a while.”

An extended eviction moratorium is just a stopgap measure for families families homelessness as a result of the COVID-19 crisis, Goldiner said.