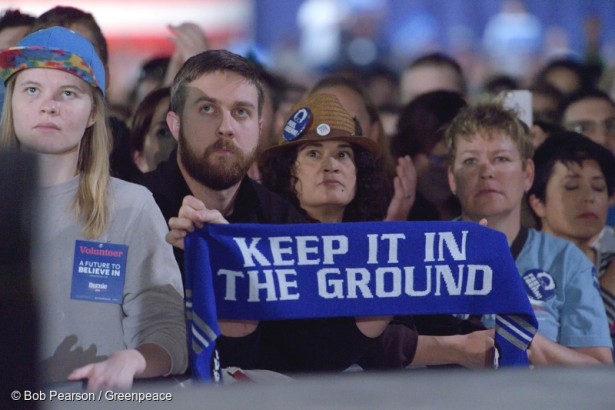 As the renewable revolution gathers a pace, the oil industry has launched yet another PR offensive trying to rebrand fossil fuels as sustainable.

So first the good news. The percentage of electricity generated by renewables in the world’s largest economies has soared by 70 per cent over the last five years, according to new research.

Data compiled by the Bloomberg New Energy Finance research group for theFinancial Times reveals that a real “shift away from fossil fuels is starting to take hold in some regions”.

The data reveals that G20 countries collectively produced 8 per cent of their electricity from solar, wind and other renewable sources in 2015, up from 4.6 per cent in 2010.

Despite Obama’s efforts to cut fossil fuels from the country’s generation mix, the US still lags behind, generating only about 8 per cent of power from renewables.

The data is released as Bill Mckibben, from 350.org, has penned a powerful polemic of the need to fight much harder to combat climate change in the New Republic. Likening the battle against climate change to World War III, he writes:

“We’re used to war as metaphor: the war on poverty, the war on drugs, the war on cancer … But this is no metaphor. By most of the ways we measure wars, climate change is the real deal: Carbon and methane are seizing physical territory, sowing havoc and panic, racking up casualties, and even destabilizing governments …It’s not that global warming is like a world war. Itis a world war.”

He adds: “And as in all conflicts, millions of refugees are fleeing the horrors of war, their numbers swelling daily as they’re forced to abandon their homes to escape famine and desolation and disease. World War III is well and truly underway. And we are losing.”

Mckibben points out how America could be leading the renewable power race. Research by Mark Jacobson, a Professor of civil and environmental engineering at Stanford University reveals that America could generate 80 to 85 percent of its power from sun, wind, and water by 2030, and 100 percent by 2050. And its not just in the US. The Stanford team has drawn up similar detailed plans for 139 other nations.

So why is it not happening? Why are we losing? One reason is that “There are powerful forces, of course, that stand in the way of a full-scale mobilization.”

And those powerful forces of course are Big Oil and its allies, which despite climate change continue to resist and undermine the renewable revolution and promote fossil fuels. As in any war, propaganda is key and the oil industry keeps on pumping out its message.

Anyone who has been following the climate debate will know of the way that Exxon and the Koch brothers have long distorted it by pouring tens of millions into groups that deny climate change.

But be careful what you read. Big Oil has tried this before, with BP rebranding itself “Beyond Petroleum” just after the Millennium, and Shell, Chevron and others publishing greenwashing adverts trying to portray oil as green.

And now they are trying it again.

It was back in February that it was first reported that the Kochs were looking at funding a $10 million a year PR campaign to “boost petroleum-based transportation fuels and attack government subsidies for electric vehicles.”

As Desmogblog reports, the new PR campaign was launched last weekend at the Red State Gathering 2016, after the new website (pictured) had been launched earlier this month.

Rather than promote truly sustainable energy sources which are renewables the intention of the campaign is to try and persuade people that fossil fuels are supposedly sustainable.

It is classic disinformation straight out of Big Tobacco’s playbook.

“We need a sustainable energy to ensure the future of the country,” Charles Drevna, who is leading the PR campaign, told the audience. “Folks, that’s of course the fossil fuels,” he added.

Drevna, an ex-fossil fuel lobbyist, went on: “We’ve got to take this to the emotional and personal level. “Oil and natural gas, they’re not the fuels of the past and maybe the present or a necessary evil. They are the future.”

Drevna also told the crowd what we have long known, that the oil industry had “been engaged in asymmetric warfare”.

So the oil industry sees the fight against climate change as a war too.

To help clear the fog of war, Desmogblog has now launched a microsite called Koch Vs. Clean, which “takes a closer look at the Koch network’s efforts to promote the continued burning of fossil fuels and undermine clean energy”.

To check it out go here.