Above Photo: The Stop the Speaker PAC’s billboard is currently up in House Speaker Paul Ryan’s hometown of Janesville, Wisconsin. (Photo: @StoptheSpeaker/Twitter)

Constituents have for weeks been complaining of difficulty reaching House Speaker Paul Ryan (R-Wis.) by phone, so on Wednesday a national advocacy group brought their messages right to the congressman’s doorstep—”the old-fashioned way.”

He’ll get them when he returns from a fundraising jaunt in Texas, presumably.

Women’s advocacy group UltraViolet organized the drop-off of 86,000 postcards, bearing custom notes from people around the country, along with a cake and a singing telegram. The postcards were delivered to Ryan’s Janesville, Wisconsin, office in a truck carrying a giant, glittery slogan: “Special Delivery: To the Speaker of the House. From: Concerned Americans.” 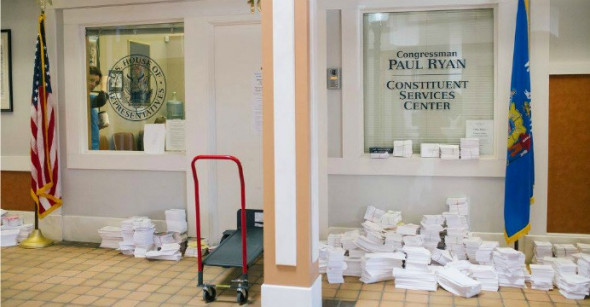 Reaching Ryan by phone or even by fax has proved challenging in recent weeks, as voters nationwide attempt to register their concern over the GOP leader’s role in dismantling the Affordable Care Act, defunding Planned Parenthood, and supporting President Donald Trump’s executive orders on immigration.

“Whether House Speaker Paul Ryan has intentionally cut off his phone line from the public or failed to accommodate a high volume of calls, it is unacceptable to shut off the American people from having their voices heard,” said Nita Chaudhary, co-founder of UltraViolet, on Wednesday.

“Millions of Americans are scared and stand to lose so much—whether it’s families living in fear of deportation, parents worried about providing their children affordable health insurance, or women uncertain if their access to safe, legal abortion services will be in jeopardy,” she said. “That’s why we left messages for Paul Ryan the old-fashioned way, with thousands of postcards delivered right to his hometown. Speaker Ryan’s office may not be taking our calls, but our voices will be heard.”

The action, which is part of this week’s Resistance Recess, took place as Ryan toured the U.S.’ southern border with Mexico on horseback; the speaker is not holding any hometown district meetings this week but is reportedly fundraising in several Texas cities.

For his reluctance to face the voters who put him in office, he is the target of a campaign coordinated by the Stop the Speaker PAC, which launched a petition demanding Ryan hold a public town hall and over the weekend mounted a billboard calling on Ryan to “stop running from us.”

Why won’t @SpeakerRyan hold a town hall meeting in his district? Is he afraid that his constituents don’t agree with the Trump/Ryan agenda? pic.twitter.com/nj4ap3c9t0

#indivisible groups: @SpeakerRyan travels the country to raise money, won’t meet us. Can you meet him w/questions for us? @IndivisibleTeam

In addition, the group Forward Kenosha has also invited Ryan to attend a town hall meeting on February 26 from 6-7:30pm at the Kenosha UAW Local 72; if he doesn’t show up, the format will be an open constituent town hall—much like those being held around the country.