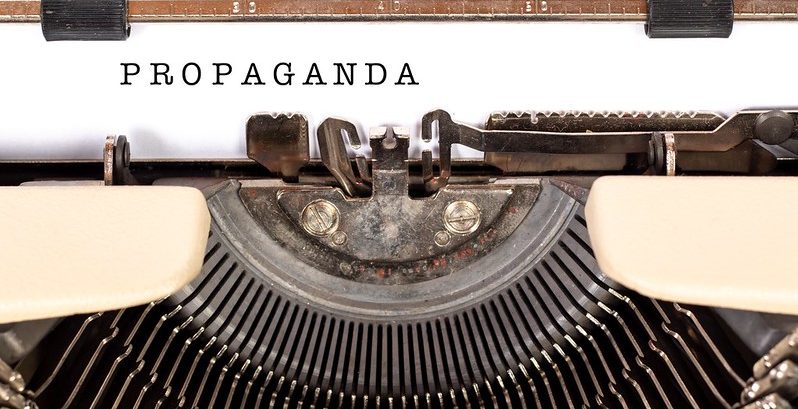 As The OPCW Is Accused Of False Reporting, US Propaganda Jumps To Its Help

An international organization published two false reports and got caught in the act. But as the false reports are in the U.S. interests a U.S. sponsored propaganda organization is send out to muddle the issue. As that effort comes under fire the New York Times jumps in to give the cover-up effort some extra help.

The Organisation for the Prohibition of Chemical Weapons (OPCW) manufactured a pretext for war by suppressing its own scientists’ research:

OPCW emails and documents were leaked and whistleblowers came forward to speak with journalists and international lawyers. Veteran journalist Jonathan Steele, who has spoken with the whistleblowers, wrote an excellent piece on the issues. In the Mail on Sunday columnist Peter Hitchens picked up the issue and moved it forward.

Under U.S. pressure the OPCW management modified or suppressed the findings of its own scientists to make it look as if the Syrian government had been responsible for the alleged chemical incident in April 2018 in Douma.

The public attention to the OPCW’s fakery lead to the questioning of other assertions the OPCW had previously made. With the OPCW under fire someone had to come to its help.

That assertion is now further propagated by a New York Times piece which, under the pretense of reporting about open source analysis, boosts Bellingcat and its defense of the OPCW:

The blogger Eliot Higgins made waves early in the decade by covering the war in Syria from a laptop in his apartment in Leicester, England, while caring for his infant daughter. In 2014, he founded Bellingcat, an open-source news outlet that has grown to include roughly a dozen staff members, with an office in The Hague. Mr. Higgins attributed his skill not to any special knowledge of international conflicts or digital data, but to the hours he had spent playing video games, which, he said, gave him the idea that any mystery can be cracked.
…
Bellingcat journalists have spread the word about their techniques in seminars attended by journalists and law-enforcement officials. Along with grants from groups like the Open Society Foundations, founded by George Soros, the seminars are a significant source of revenue for Bellingcat, a nonprofit organization.

It seems that the New York Times forgot to mention an important monetary source for Bellingcat. Here is a current screenshot of Bellingcat’s About page: 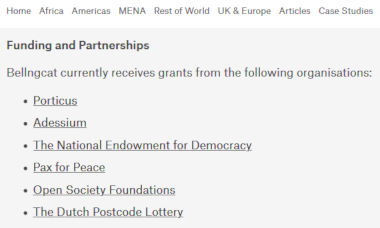 bigger
Porticus, Adessium, Pax for Peace and the Postcode Lottery are all Dutch organizations. Then there is the notorious Soros organization the New York Times mentioned. But why did the NYT forgot to tell its readers that Bellingcat is financed by the National Endowment for Democracy which itself is to nearly 100% funded by the U.S. government?

Could that be because the NED, which spends U.S.government money on more than 1.600 U.S. government paid Non-Government Organizations, is a Trojan horse, a cover for the CIA?

Spurred by Watergate – the Church committee of the Senate, the Pike committee of the House, and the Rockefeller Commission, created by the president, were all busy investigating the CIA. Seemingly every other day there was a new headline about the discovery of some awful thing, even criminal conduct, the CIA had been mixed up in for years.
…
What was done was to shift many of these awful things to a new organization, with a nice sounding name – The National Endowment for Democracy. The idea was that the NED would do somewhat overtly what the CIA had been doing covertly for decades, and thus, hopefully, eliminate the stigma associated with CIA covert activities.
…
“We should not have to do this kind of work covertly,” said Carl Gershman in 1986, while he was president of the Endowment. “It would be terrible for democratic groups around the world to be seen as subsidized by the C.I.A. We saw that in the 60’s, and that’s why it has been discontinued. We have not had the capability of doing this, and that’s why the endowment was created.”And Allen Weinstein, who helped draft the legislation establishing NED, declared in 1991: “A lot of what we do today was done covertly 25 years ago by the CIA.”

In effect, the CIA has been laundering money through NED.

The fact that the NED is doing the CIA’s work is likely the reason why the NYT puff piece about Bellingcat forgets to mention its payments and also why it jumps to Bellingcat’s and the OPCW’s help:

Some journalists and activists hostile to what they characterize as Bellingcat’s pro-Western narratives have criticized some of its coverage of the war in Syria.At issue is an April 7, 2018, attack on Douma, Syria. Bellingcat reported, based on an analysis of six open-source videos, that it was “highly likely” that Douma civilians had died because of chemical weapons. In March, the Organization for the Prohibition of Chemical Weapons reported that there were “reasonable grounds” to say that chemical weapons had been used in the attack.

Critics of Bellingcat have pointed to an email from an investigator with the organization, saying that it raised questions about the findings. WikiLeaks published the email on Nov. 23. In a response, Bellingcat defended its reporting, saying the final report on Douma from the Organization for the Prohibition of Chemical Weapons reflected the concerns of the investigator whose email was published by WikiLeaks.

By playing video games Elliot Higgins learned to identify chemical attacks in dubious video sequences published by terrorist affiliates. If true it is an admirable capability. Still his assertion that the OPCW report “reflected the concerns of the investigator” who criticized it is, as Caitlin Johnstone demonstrates, utterly false:

Bellingcat simply ignores this absolutely central aspect of the email, as well as the whistleblower’s point about the symptoms of victims not matching chlorine gas poisoning.

“In this case the confidence in the identity of chlorine or any choking agent is drawn into question precisely because of the inconsistency with the reported and observed symptoms,” the whistleblower writes in the email. “The inconsistency was not only noted by the [Fact Finding Mission] team but strongly noted by three toxicologists with expertise in exposure to [Chemical Weapons] agents.”

Bellingcat completely ignores all of these points, …

In its defense of the OPCW report Bellingcat wrote:

[A] comparison of the points raised in the letter against the final Douma report makes it amply clear that the OPCW not only addressed these points, but even changed the conclusion of an earlier report to reflect the concerns of said employee.

Mail on Sunday columnist Peter Hitchens did not concur with that paragraph:

Apart from the words ‘a’, and ‘the’, everything in the above paragraph is, to put it politely, mistaken. Bellingcat have been so anxious to trash the leak from the OPCW that they have (as many did when the attack was first released) rushed to judgment without waiting for the facts. More is known by the whistleblowers of the OPCW than has yet been released …

Caitlin and Peter should play more video games. I have read in the NYT that they are the true path to learning and to the factual assessment of alleged chemical attacks.

On April 7 2018 terrorists of the Jaish al Islam group ruled in Douma. They killed 40 civilians. The bodies were shown in videos along with chlorine gas canisters to pretend that the Syrian government had killed those people. The OPCW’s fact finding team analyzed the evidence and found that the canisters had not been dropped from the air but were manually placed. The symptoms the victims showed were inconsistent with a chlorine attack and chlorinated substances were only found in extremely low concentrations. There were absolutely no “reasonable grounds” to say that chemical weapons had been used in the attack.

But the OPCW management, under U.S. pressure and despite the protests by its own scientists, put out a report that said the opposite. As the manipulation came to light the U.S. funded Bellingcat made a perfunctory attempt to muddle the issue. Thus another propaganda organization, the New York Times, had to jump in to save Bellingcat and the false OPCW claims.

It is not going to help. There will soon be more evidence that the OPCW management published two false reports on Douma, and likely even more on other issues. There will be a public recognition that the OPCW has failed.