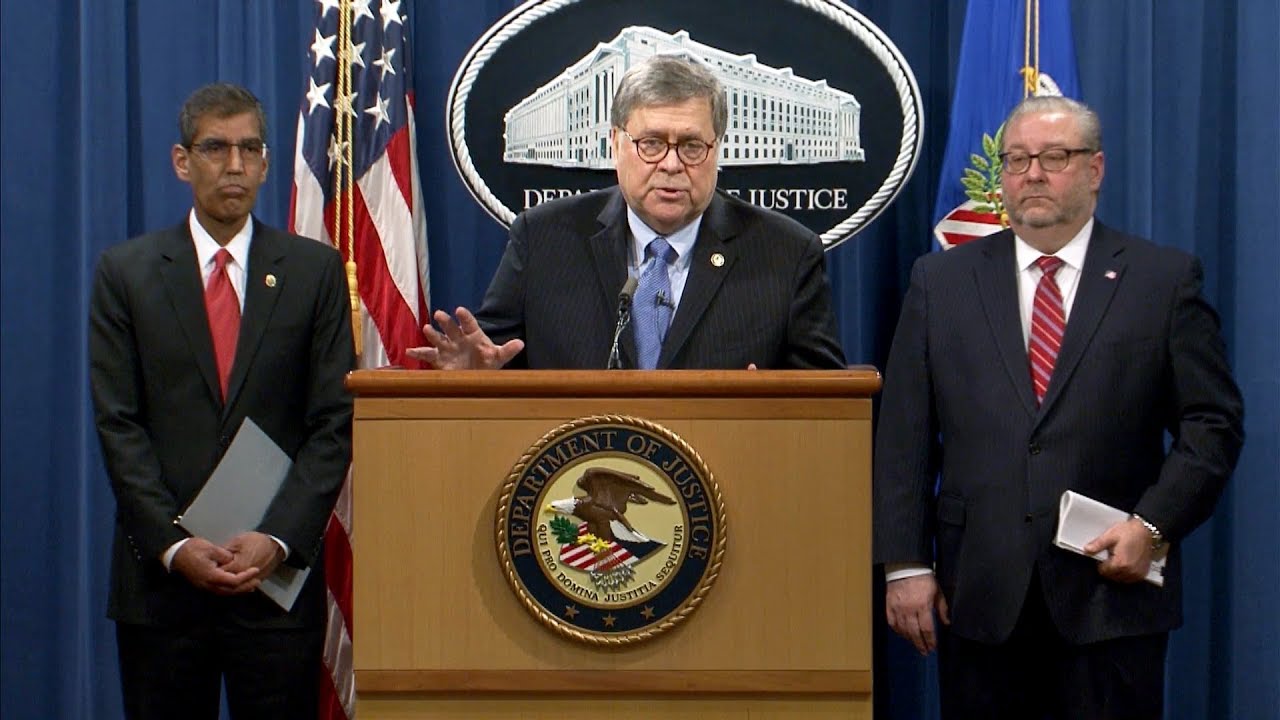 As The World Tackles COVID-19, The US Raises Pressure On Venezuela

Above photo: William Barr speaks at the Department of Justice press conference on March 26, 2020. DOJ website.

TAKE ACTION: Take a photo of yourself holding a sign that calls for no war on Venezuela and stop the sanctions. Share it on social media using the hashtag #FightCovidNotVenezuela and target your member of Congress as well as President Trump. Spread the word however you can by sharing this letter on social media and by email. Write letters to your editor opposing war on Venezuela. The United Nations has called for a global ceasefire to focus on the COVID19 pandemic. We need to be fighting the disease not each other. We need to send doctors, not soldiers. Tag @PopResistance and we’ll retweet your tweets. Thank you. – Popular Resistance

In a press conference on March 26, it was almost comical how little evidence the U.S. Department of Justice provided when it accused Venezuela’s President Nicolás Maduro and several of the leaders of his government of narco-trafficking. The U.S. offered $15 million for the arrest of Maduro and $10 million for the others. Maduro, U.S. Attorney Geoffrey Berman said dramatically, “very deliberately deployed cocaine as a weapon.” Evidence for this? Not presented at all.

It is surreal that the United States—during the COVID-19 global pandemic—chooses to put its efforts into this ridiculous, evidence-free indictment against Maduro and other members of the government. There is better use for the money put up as a reward in the overstretched hospital in Elmhurst in New York City. Already, there is pressure on the United States to cut the sanctions not only against Venezuela but also against Iran (even the New York Times came out on March 25 to call for an end to sanctions on Iran). The World Health Organization has made it clear that this is just not the time to hamper the ability of countries to get precious supplies in to tackle the pandemic. UN Secretary-General António Guterres has called for a ceasefire in conflicts; it is only a matter of days before he was expected to make a statement about sanctions. Now, out of desperation, the U.S. has tried to change the conversation—no longer about COVID-19 and sanctions but about narco-terrorism.

When asked about these indictments during the COVID-19 pandemic, U.S. Attorney General William Barr tried to say that the fault lay not in Washington but in Caracas. He said, absent any evidence, that Venezuela is blocking aid from coming into the country. Nothing could be further from the truth, since Venezuela has welcomed medical supplies and medical personnel from China, Cuba, and Russia, as well as from the World Health Organization. In fact, the World Health Organization has pressed the U.S. to allow it more free rein to bring goods into the country—a request that the U.S. has not allowed (the U.S. also has made it difficult for the World Health Organization to get medical supplies into Iran). When Venezuela went to the International Monetary Fund with a request for $5 billion for COVID-19 related purchases, it was the United States government that put pressure on the Fund to deny the request. Barr can so easily say the very opposite of truth because none of the media outlets at the press conference would challenge him based on matters that are clearly in the public record.

In 1989, the U.S. used the accusation of narco-trafficking, specifically cocaine trafficking, to taint the reputation of its former asset, the president of Panama Manuel Noriega. It was based on this accusation and an indictment in Florida, that the U.S. eventually invaded the country, seized Noriega, planted Washington’s puppet in Panama City, and threw Noriega into a Florida prison. The shadow of how the U.S. dealt with Noriega hangs over Caracas: will the U.S. launch an expeditionary raid based on this new indictment? This is not a theoretical question. The U.S. has tried since at least January 2019 to destabilize and overthrow the government of Nicolás Maduro. What this indictment does is to merely try to tighten the screw.

The bounty on the heads of Maduro and his leadership suggests that the U.S. government has essentially put a mafia-type hit out on these Venezuelans. This is a very dangerous move by the United States. It essentially gives gangsters a green light to attempt assassination inside Venezuela. The refusal to allow Maduro to travel outside Venezuela is a violation of a series of international conventions that promote diplomacy over belligerence. But, given the lawless way that the U.S. has formulated its regime change strategy against Venezuela, it is unlikely that anyone is going to criticize this move.

Meanwhile, the U.S. government does not dare take action against its allies in the key drug-producing and trafficking countries of Colombia and Honduras. Former Colombian president and current Senate member Álvaro Uribe Vélez is currently implicated in more than 270 legal cases in Colombia with charges including illegal wiretapping, organized crime, selective assassinations, and forced disappearances. Uribe and members of his family have proven links with the paramilitary group Metro Block of Antioquia, which was responsible for thousands of assassinations of Colombian civilians and was deeply involved in the narco-trafficking. Uribe and his protégé Iván Duque have a close relationship with the U.S. government and have been the cornerstone and ally of diverse plans to attack Venezuela.

Current Honduran President Juan Orlando Hernández was implicated in the case brought by a New York federal court against his brother Antonio Hernández, and prosecutors alleged that the president had received $25,000 in bribes from drug traffickers that were used for his 2013 presidential campaign.

The statement released by the U.S. Department of Justice reads like a thriller, and the lack of evidence lends it to comparison with fiction. It lists names and accusations, makes constant references to “narco-terrorism,” and claims that the Venezuelan government wants to “flood” the United States with cocaine. It would take a superhuman effort of blindness to believe this baseless ranting and raving. But the problem is that the people of Venezuela must take this seriously, since it is a deepening of the belligerence of the United States government. The people of Venezuela are aware of a Panama-type situation. It’s hard to blame them. This is the track record of the United States government.

The UN secretary-general’s comment that ceasefires are the call of the hour given the global pandemic should apply to the United States’ hybrid war against Venezuela. It needs to stop now. This is the time of healing and compassion, not the time of toxic masculinity and warfare.

This article was produced by Globetrotter, a project of the Independent Media Institute.