Saturday, February 23 was supposed to be the big day when a so-called “humanitarian aid” caravan would cross into Venezuela from neighboring Colombia. The left-wing government of President Nicolás Maduro would be further destabilized and the stage set for his removal. As it turned out, the “big day” was something of an embarrassment for the Trump administration and its Venezuelan puppet, the self-proclaimed and U.S.-backed “Interim President”, Juan Guaidó.

In preparation for this stunt, all kinds of right-wing figures had congregated in the impoverished small city of Cúcuta, Colombia, just across the border from Venezuela’s Táchira state. These included Colombian President Ivan Duque, Chilean President Sebastian Piñera, U.S. Sen Marco Rubio, R-Fla., and U.S. Vice President Mike Pence, as well as Guaidó. But in spite of right-wing inspired violence that erupted at the border, no trucks got through, either from Cúcuta or from Brazil or from the Dutch-controlled island of Aruba.

Cúcuta was an interesting choice for this provocation. It is known for two things: The extreme poverty of many of its inhabitants, and its role as a major center for smuggling and other illicit activity. Venezuelan and Colombian citizens have developed a cottage industry of buying super cheap, government-subsidized items in Venezuela, sneaking them across the border to Cúcuta, and selling them there at much higher prices. Gasoline, which is extremely inexpensive in oil-rich Venezuela, is one commodity thus trafficked, but not the only one. The Cúcuta smuggling racket is a serious contributor to the shortages of some items in Venezuela.

There was violence at the Colombia crossing, and at another crossing in Brazil. A small number of Venezuelan soldiers hijacked two armored personnel carriers and rammed them into the barriers that had been set up at the Colombian border, injuring two people, including a woman journalist from Chile. Anti-Maduro gangs set fire to two of the “humanitarian aid” trucks on the Colombian side, in hopes that this would be blamed on Maduro supporters. On the border with Brazil, there was a clash between local people of the Pemon indigenous group and Venezuelan security personnel, which left four dead. The Venezuelan government blames this incident on the local mayor, an opposition supporter.

But the trucks didn’t get through, and the opposition to the maneuver was met by massive protests, in Caracas and elsewhere, against U.S. interference in Venezuela’s internal affairs. President Maduro’s government pointed out that the amount of “humanitarian aid” supposedly being offered in this charade organized by the United States Agency for International Development (USAID) amounts to a little more than $20 million, while illegal unilateral sanctions that the United States has imposed on Venezuela have cost the country at least $30 billion.

Venezuela receives a considerable amount of aid through agencies such as the International Committee of the Red Cross/Red Crescent, and if the United States really wanted to help it could have worked with those agencies. The Red Cross-Red Crescent, for its part, has refused to cooperate with the United States and Guaidó in what it calls a “politicized” manipulation of the humanitarian aid issue.

The U.S. plan for regime change in Venezuela is supported by the right-wing Latin American governments, by the wealthy countries of Western Europe, and some others. But very important countries strongly oppose it, including China, Russia, India, South Africa, Mexico and the CARICOM group of Caribbean Island nations. Additionally, some of the countries that had originally jumped on the Guiadó bandwagon may now be having buyer’s remorse. Brazil, by far the biggest military power in South America, has announced that it will not cooperate with any military incursion into Venezuela.

Trump and Guaidó have made little or no headway in the United Nations Security Council, and even the Organization of American States, so often a pliant tool in U.S. hands, is not keen. The Lima Group of right-wing governed Latin American countries is still on record as wanting Maduro overthrown, but it’s not rushing to offer troops for a military incursion.

In Venezuela, calm is reported in most places, though there was an incident of right-wing terrorists unsuccessfully attacking a military barracks at La Mulata, just North of the Cúcuta border crossing,  Sunday night. The attack was easily beaten off, and there were no deaths. The Venezuelan government has now closed its borders with Colombia and Brazil and has broken off diplomatic relations with Colombia.

In the United States itself, the picture is still grim. All the major corporate media continue to put out highly inaccurate and biased reports and interpretations (one hesitates to say “analysis”) of the Venezuela situation. Over and over, the economic difficulties are blamed on the “socialist” policies of the “authoritarian” President Maduro, with little or no mention of the drastic U.S. “sanctions” blockade which has affected such things as the import of medicines.

While anti-Maduro demonstrations are given full news coverage, very large pro-Maduro demonstrations are almost completely ignored by our corporate media. As intended, this gives an utterly false impression that Maduro is isolated and that the whole country supports Guaidó. In fact, surveys show very strong popular opposition in Venezuela to U.S. sanctions and especially to threats of military intervention.

Clear statements from figures in the Trump administration and Republican Party show that that U.S. is mostly interested in facilitating major U.S. oil companies’ control over Venezuelan petroleum reserves. Before his election, Trump had already called for war with Venezuela to take control of the oil.

Major leaders of the Republican and Democratic Parties continue to demonize the Venezuelan government and call for Maduro’s overthrow and replacement by the right-winger Guiadó. And the rhetoric coming out of the Trump administration and the U.S. right gets more dangerous by the minute.  Secretary of State Mike Pompeo says President Maduro’s “days are numbered.” Sen. Rubio went a step beyond, tweeting a threat to forcefully oust Maduro with a picture of the dead body of former Libyan leader Muamar Gaddafi.

Guaidó, others in the right-wing opposition and the U.S. government and the Trump administration have repeatedly called for a military coup and even for an armed U.S. attack on Venezuela. New sanctions are now being imposed, this time on governors of those border or coastal states in Venezuela who have refused to violate their country’s national laws to facilitate the bogus “humanitarian aid.” So U.S. imperialism is by no means giving up or backing off. 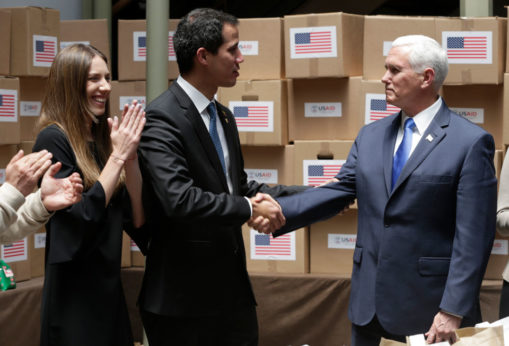 A few prominent political figures in the United States are at last speaking up, with various degrees of clarity, in opposition to the Trump administration’s Venezuela policy. They include Sen. Bernie Sanders of Vermont, plus Democratic Congresspersons Ro Khanna of California, Tulsi Gabbard of Hawaii, Alexandria Ocasio-Cortez of New York, Barbara Lee of California and, Ilhan Omar of Minnesota, with more likely to chime in.But there is a growing awareness of the war danger that U.S. policy toward Venezuela represents, and mobilization is growing. On February 23, there were demonstrations and marches against Trump’s policies and in support of Venezuela’s national sovereignty in a number of cities around the United States, as well as a great many around the world. On March 16, a major march against intervention in Venezuela will take place in Washington, D.C.

Omar sharply questioned the Trump administration’s point man on the Venezuela regime change project, Elliot Abrams, pointing out in a House hearing that his record on Latin American affairs in the past has included support for some of the most bloodthirsty dictatorships in the region, inquiring as to why anyone should believe he will be a harbinger of democracy in Venezuela? Abrams was in the past convicted for lying to the U.S. Congress on the long-ago Iran-Contra affair, so why, asked Representative Omar, should anybody trust him now?

Several of these House members have now introduced legislation in Congress to oppose U.S. military intervention in Venezuela. The Bill, H.R. 1004, is sponsored by Rep. David Cicilline, D-R.I., is titled “Prohibiting Unauthorized Military Intervention in Venezuela Act,” and currently has 38 co-sponsors.   RootsAction and other groups are asking all to contact their Congressional representatives to support this legislation. Contact information for Senators and Representatives, plus information on the progress of this and other bills, can be found on the official website of the U.S. Congress.

The bill is limited in scope; it does not say anything about the very harmful sanctions the U.S. has imposed on Venezuela. But the reasoning is that if enough voters in the United States begin to raise their voice in support of it and in opposition to Trump’s belligerent policies, bolder efforts will be enhanced.