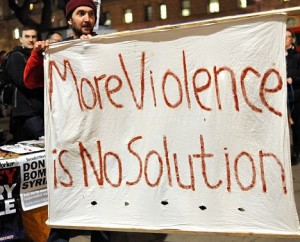 Citing the disastrous bombing campaign in 2011 that pushed the nation into political chaos and bloody violence, anti-war groups are calling for an immediate end to a new wave of airstrikes on Libya approved by U.S. President Barack Obama.

“The world needs a peace movement now more than ever, as Obama continues to drop bombs all over the Middle East and we prepare for the next US president.” —CodePinkIn an online petition sent out Tuesday, the U.S.-based peace group CODEPINK declared:

We, the undersigned, call on President Obama to end the bombing campaign in Libya and across the Middle East. We agree with Congresswoman Barbara Lee when she said that “there is no military solution to this crisis” with [the Islamic State or ISIS]. We ask that the administration instead take steps to form a comprehensive regional approach that addresses political, economic, humanitarian and diplomatic challenges that allow [ISIS] to commit violence.

With neither Hillary Clinton nor Donald Trump running as a peace candidate, CODEPINK said in a statement “that the world needs a peace movement now more than ever, as Obama continues to drop bombs all over the Middle East and we prepare for the next U.S. president.”

The U.S. military’s series of airstrikes on Libya on Monday was the start of a 30-day offensive approved by Obama, Fox News reported on Tuesday.

The U.K.-based Stop the War Coalition described the new assault as a “neo-colonial offensive” that would “only pile further misery on to the Libyan people who have suffered a social meltdown as a result of the last,” referring to the U.S.-backed toppling of Libyan dictator Muammar Gaddafi in 2011.

Obama’s latest orders, the group added, will only further “entrench divisions and intensify violence” in the region. “We must step up our efforts to break our governments’ obsession with military solutions.”

The airstrikes, which were reportedly directed at targets affiliated with ISIS, continued throughout the day on Tuesday, amounting to at least seven strikes since the campaign began.

“Marine Corps Harrier jets launched from the Navy amphibious assault ship USS Wasp conducted at least two airstrikes against ISIS targets in the coastal city of Sirte Tuesday,”Fox News reported. “USS Wasp is set to remain off the Libyan coast in the Mediterranean Sea for the next month along with an escort ship, the guided-missile destroyer USS Carney.”

Notably, Fox reported that while the president’s authorization in Libya “was limited to Sirte,” Pentagon spokesman Capt. Jeff Davis told reporters that “the U.S. military reserved the right to conduct counterterrorism strikes elsewhere in the country as the U.S. military did in November and February,” referring to previous strikes in Libya.

And as Rep. Barbara Lee (D-Calif.) pointed out on Monday, the military campaign against ISIS continues to grow and evolve “despite the lack of a Congressional debate or specific authorization.”

“Our military experts are clear: there is no military solution to this crisis,” Lee added. “Only a comprehensive, regionally-led strategy that addresses the underlying political, economic, humanitarian and diplomatic challenges will be effective in ultimately degrading and dismantling [ISIS].”

During a press conference on Tuesday, Obama said the action was carried out by request of the Libyan government, claiming the expanded military campaign was vital in the multinational war against ISIS.

“It is in America’s national security interest in our fight against [ISIS] to make sure that they are able to finish the job, so we are working in partnership with them to assure that [ISIS] does not get a stronghold in Libya even as Libya begins what is going to be a slog—a long process to establish a functioning government and security system there,” he said.

Indeed, Obama himself admitted earlier this year that “failing to plan for the day after” the overthrow of Gaddafi was the “worst mistake” of his presidency. Critics of U.S. military strategy have long-warned that the 2011 intervention would create a power vacuum and inevitably pave the way for an entity, such as ISIS, to gain control.

Now, the expanded bombing campaign will only continue the “War on Terror Circle of Life,” as Guardian columnist Trevor Timm put it on Tuesday, “where the U.S. bombs a country and then funnels weapons into the region, which leads to chaos and the opportunity for terrorist organizations, which then leads more U.S. bombing.”

Capt. Davis attempted to soothe reporters on Tuesday, saying, “We don’t envision this as being something that’s going to be too long.”

“This is a finite period of time and a very finite mission,” he added.

However, placing the “very finite mission” in more acute economic and historical context, the Stop the War Coalition posited that the bombing of Libya is a stark reminder of how western nations continually pursuit their own strategic interests above the interests of local populations and regional stability.

For example, though the bombing campaign is marketed as an effort to oust ISIS militants from Sirte, the coalition noted the role that fossil fuel reserves continue to play when it comes to offensive bombing campaigns undertaken by the U.S. and other western armies:

The attacks on [ISIS], who occupy some of the most important oil and gas producing areas in the country, have to be seen against this background. They come at a time when [ISIS] control appears to be weakening rather than strengthening, and interestingly, just a day after the New York Times announcedan  agreement between the [interim Libyan Government of National Accord, or GNA] and the Petroleum Facilities Guards to reopen three eastern ports that haven’t been shipping oil for eighteen months. The paper reported that the National Oil Company estimates that nationwide oil production could increase by 150,000 barrels a day, from about 400,000 barrels a day, within two weeks.

The new offensive by the US is part of an attempt to secure hegemony in one of the most important oil and gas producing countries in the world. Libya has the largest crude oil reserves in Africa, and the fifth largest gas reserves. Its location so close to Europe makes it particularly important strategically for the Western powers. The forces that recapture Sirte and the Sirte Basin to its South – the location of 80% of proven reserves – will control the Libyan economy.

Meanwhile, as Jason Ditz reported for Antiwar.com, the situation on the ground is much more complicated than most reporting reveals, with the UN-backed GNA serving as only one of “several forces trying to take over Sirte from ISIS, including the rival Tripoli parliament and its allies in the Misrata militia. It remains to be seen if the U.S. focus is solely on ensuring ISIS loses the city, or if they will commit militarily to resist it falling to another faction.”

Appearing to prove that instability and further violence would find fertile ground amid increased U.S. military support, a car bombing in the eastern city of Benghazi on Tuesdayreportedly claimed the lives of at least 22 people.

“There have been occasional car bombings [in this area],” the Guardian reported, “though the toll from Tuesday’s blast was unusually high.”