As Yemeni Fishermen Risk Their Lives To Feed Their Nation, Saudis Use Them For Target Practice

By Mnar Muhawesh and Ahmed Abdulrahman, Mintpressnews.com
February 16, 2019
| Educate!
As Yemeni Fishermen Risk Their Lives To Feed Their Nation, Saudis Use Them For Target Practice2019-02-162019-02-16https://popularresistance-uploads.s3.amazonaws.com/uploads/2017/12/popres-shorter.pngPopularResistance.Orghttps://popularresistance-uploads.s3.amazonaws.com/uploads/2019/02/ap_18287450586616_edited.jpg200px200px

Above Photo: In this Sept. 29, 2018, photo, a boy holds the catch of the day on a boat at the main fishing port, in Hodeida, Yemen. Hani Mohammed | AP

With neither its farmers nor fishermen safe from Saudi coalition attacks, famine has become a massive crisis in Yemen, further exacerbated by the coalition’s blockade of the country which largely prevents food from being imported into the troubled nation.

HODEIDA, YEMEN —  “They told us that if we didn’t confess they would kill us and throw our bodies into the sea for the fish and birds to eat,” recalls Omar Ghalib, a Yemeni fisherman who was kidnapped by Saudi fighters and then tortured while out in his boat late one evening in Yemen’s port city of Hodeida.

We arrived to our usual fishing spot in the sea at 2 p.m., where we began deploying the nets. Moments later, an Apache attack chopper began hovering overhead and opened fire using its cannons. It targeted each and every fishing boat. We were terrified and didn’t know where to go or what to do. The Apache circled overhead as it continued to fire three to four rounds on each fishing boat.”

The fishermen all hung large white flags on the back of their boats signaling to the Saudi Coalition battleships that they are simply fishermen and mean no harm.

Despite making their mark clear, Omar told MintPress that six soldiers on board a gunboat approached them and began opening fire on them before all 10 fishermen surrendered.

What brought you to this place? You know this place is dangerous.’ So I told him we came to fish as Hamoor fish are abundant here and it is a fish of good quality and high price. After a long conversation in which we tried to explain to him and tell him about the fishing spots, he interrupted and said ‘Do you know that I gave the Apache orders to kill you all?’ The Captain continued to accuse us of working for the Houthis but we continued to reiterate that we were poor and simple fishermen who went out to make a living.”

But it didn’t seem to matter what Omar or the other fishermen had to say. The soldiers had made up their minds and were determined to terrorize the men.

One of the soldiers told us to get off the boat and into the sea before they commenced searching the boats for two hours — but they found nothing. They then rounded up all the fishermen, put them on the gunboat, and told us that they were going to take us to the warship before putting black bags on our heads and tying us with plastic handcuffs.”

Despite the fact that Saudi soldiers found nothing on their boat, the fishermen were accused of being Houthi collaborators leading the Saudi forces to take the men to a prison torture room inside a Saudi battleship where they were stripped down naked.

They divided us into groups of two accompanied by three soldiers from the warship before taking us to different rooms. They took me to a closed room accompanied by three soldiers. Two of the soldiers I saw were Saudis and every time I was beaten up an Egyptian doctor would come to check up on me. The beating was brutal: they made us lie down on our chests and take off all our clothes except for piece of cloth around our waists. They began to whip me while my hands were cuffed behind my back. They whipped us over and over again using a black electricity cable until I felt my body was on fire. I used to scream, ‘Please stop! please have some mercy!’ to no avail.”

The Apache pilot was standing right next to me as I was being tortured. He was right behind me and I recognized him from his uniform and the stars on his shoulder pads. When I screamed, ‘Have mercy on me, stop!’ he took an iron rod and struck my hand saying, ‘You’re nothing but a Yemeni hound, you are Houthis.’ I told him that we weren’t Houthis and that we were only fishermen.”

Ghalib’s horrific story is one that has been shared by many fishermen over the course of Yemen’s brutal war waged by Saudi Arabia and the United Arab Emirates, and funded in large part, if not entirely, by the United States against the Yemeni resistance group Ansar Allah after the latter took power in 2015.

For the past three-and-a-half years, the Saudi/UAE coalition — with support from the United States and the United Kingdom — has relentlessly bombed civilian targets, including schools, hospitals, clinics, water-treatment facilities, and even school buses.

But little attention has been given to the devastating reality fishermen, who have become frequent targets, have to live each day.

And it’s no accident. This is part of the U.S.-Saudi led coalition’s long-standing efforts to wage war against Yemen’s food supply.

In the first year of the war alone, the coalition bombed over 350 farms, factories, food storage sites, markets, and other agricultural infrastructure, resulting in heavy damage to Yemen’s small portion of arable land — a lifeline for its people.

With neither farmers nor fishermen safe from coalition attacks, famine has become a massive crisis in Yemen, further exacerbated by the coalition’s blockade of the country since March 2015, when Saudi Arabia launched its war against Yemen.

The blockade prevented food from being imported into the troubled nation. The gravity of the situation is starkly revealed by recent warnings from the UN, which has cautioned that an estimated 18.4 million Yemenis — two-thirds of the country’s entire population —  now risk starving to death.

However, thanks to the coalition’s naval blockade of Yemen, Yemen’s fishermen are arguably in an even more precarious situation, as they are targeted by coalition fighter jets and naval vessels alike.

As a result, since the war began, at least 200 fishing boats have been damaged or destroyed and over 334 fishermen are believed to have been killed by coalition ships and helicopters, according to statistics from Yemen’s Fisheries and Aquaculture Authority. This amounts to over $5.6 billion in total losses from Yemen’s Red Sea fishing sector. 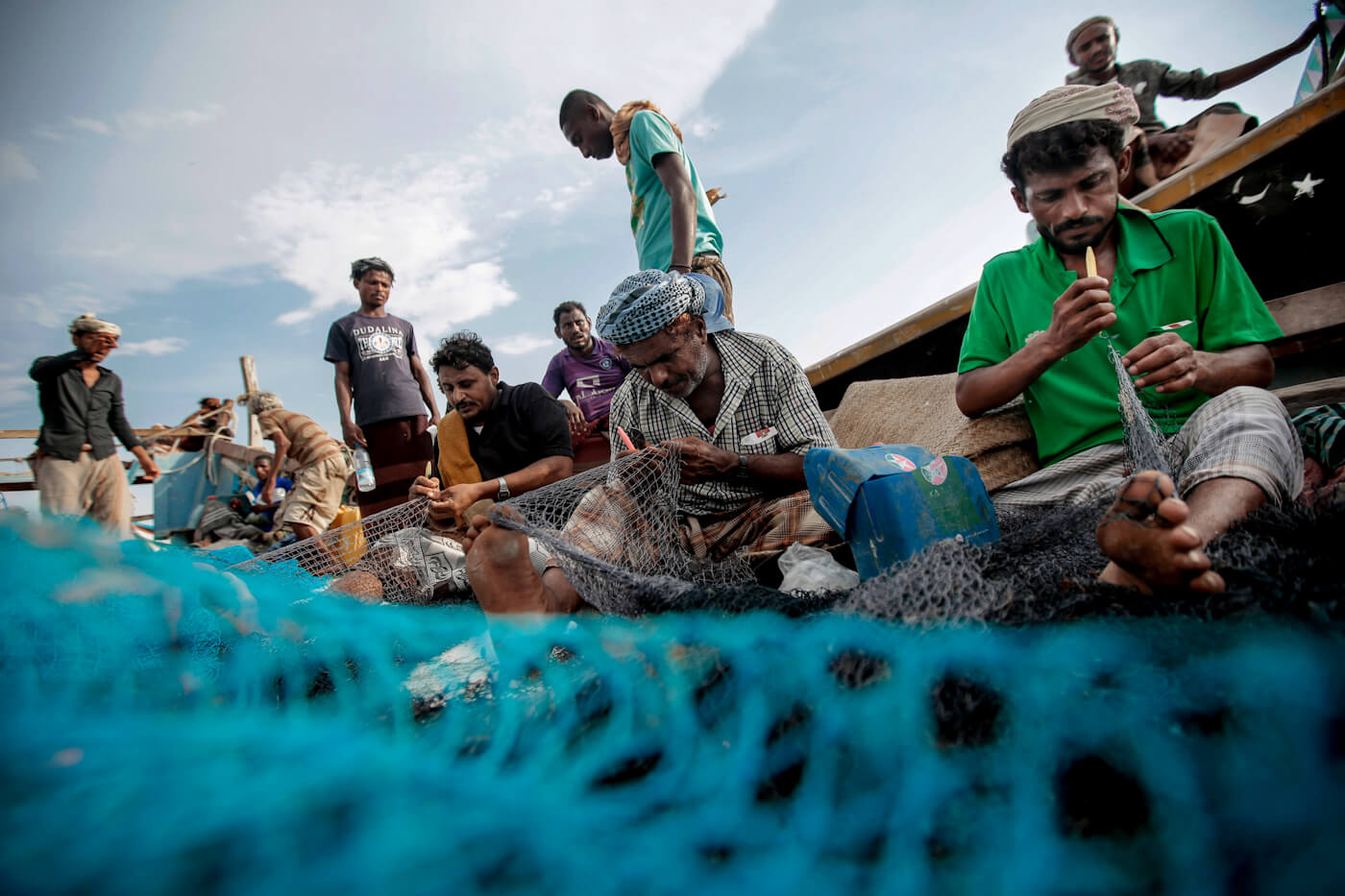 Fishermen work on their nets before a fishing trip at the main fishing port, in Hodeida, Yemen, Sept. 29, 2018. Hani Mohammed | AP

The 2.3 million people who live in Hodeida make it the second largest in population among Yemeni provinces.The U.S.-backed Saudi coalition against Yemen has drastically increased its attacks against Hodeida province since June of 2018 as part of its Operation Golden Victor to retake the port from Yemeni forces.

Since Saudi Arabia’s Operation Golden Victor began, the number of displaced people from Hodeida has reached up to one million, who are escaping daily threats from airstrikes, Saudi-backed mercenaries, famine, and poverty.

Despite this horrifying reality, these incidents haven’t stopped the remaining fishermen from the Al-Rabsa neighborhood, where Omar lives, from going back on their boats to seek sustenance and an honest living from the sea, as they have for generations.

We encountered all these situations in the sea but it didn’t prevent us from going out to fish again because we have no other place to go and no other livelihood.”

But Omar admits that he’s haunted by the horrifying memories of witnessing those closest to him die.

Days later, as I was intending to go fishing, a group of fishermen who went fishing before me returned dead. Five of their fishing boats were targeted by the warplanes and warships of the Saudi-led, U.S.-backed coalition at al-Sawabe’ Island shore.”

One of those killed was Omar’s brother. It’s a day his mother Mariam will never forget:

I watched them all flocking to the house to visit me so my heart was naturally unsettled. I told them I can sense something, what’s wrong? Tell me! They told me that there was nothing wrong. But my heart was telling me that something was wrong, a mother’s heart can never lie. I see them… I see them anxious.

I insisted that they tell me what’s going on but nobody said a word. I eventually held Omar and asked him, ‘What’s going on? Please tell me!’ He then said, ‘Mohammed was killed,’ so I said ‘How?’ He replied ‘An airstrike.’ I screamed and cried saying, ‘My son died! My son died!’ I passed out and it all went foggy in my mind before being rushed to the hospital.

Four young men went missing including my son, my husband’s brother, and two other men who were about the same age as my sons. They searched for the bodies and only found them on the fifth day. My son’s body was so swollen, I couldn’t recognize him.

I’ve been suffering from mental and physical pain and sickness ever since that day. I cry throughout the day and night.”

This is how it is for many Yemeni mothers and families torn apart by the years of violence and death.

Omar is the only one of the fishermen who was able to speak with MintPress, but as we tried to enter the al-Rabsa neighborhood to take more testimony from the other fishermen for this story, clashes intensified as Saudi planes continued to bombard the province.

For the remaining residents of Hodeida, and perhaps the entire country of Yemen, it’s only a matter of time until their last remaining lifeline of food is stripped away — threatening to wipe out an entire nation at the hands of U.S.-backed, Saudi-led coalition.