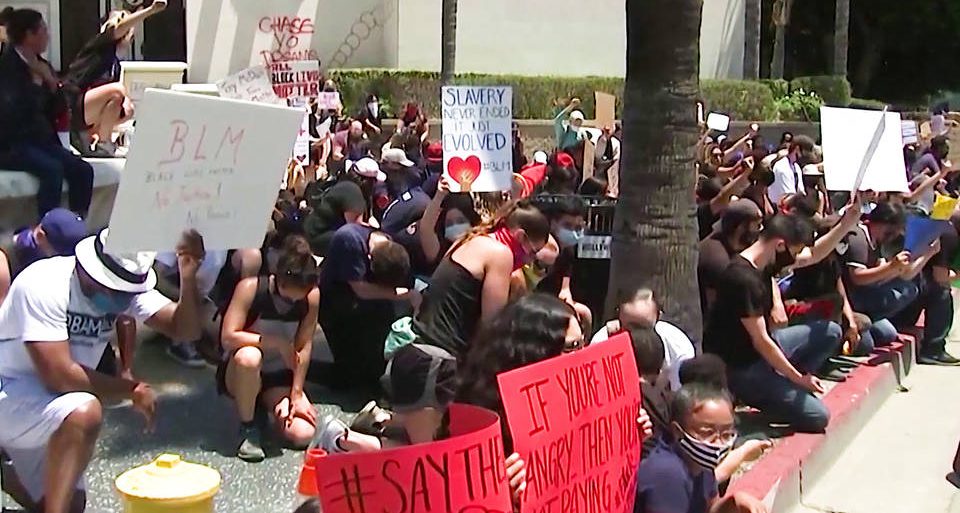 Above photo: Asheville apologizes for slavery. From Democracy Now.

Asheville, NC – In an extraordinary move, the City Council has apologized for the city’s historic role in slavery, discrimination and denial of basic liberties to Black residents and voted to provide reparations to them and their descendants.

“Hundreds of years of black blood spilled that basically fills the cup we drink from today,” said Councilman Keith Young, one of two African American members of the body and the measure’s chief proponent.

“It is simply not enough to remove statues. Black people in this country are dealing with issues that are systemic in nature,” Young said.

The unanimously passed resolution does not mandate direct payments. Instead it will make investments in areas where Black residents face disparities.

“The resulting budgetary and programmatic priorities may include but not be limited to increasing minority home ownership and access to other affordable housing, increasing minority business ownership and career opportunities, strategies to grow equity and generational wealth, closing the gaps in health care, education, employment and pay, neighborhood safety and fairness within criminal justice,” the resolution reads.

The resolution calls on the city to create the Community Reparations Commission, inviting community groups and other local governments to join. It will be the commission’s job to make concrete recommendations for programs and resources to be used.

Councilwoman Sheneika Smith, who is Black, said the council had gotten emails from those “asking, ‘Why should we pay for what happened during slavery?'”

“(Slavery) is this institution that serves as the starting point for the building of the strong economic floor for white America, while attempting to keep Blacks subordinate forever to its progress,” said Smith.

Councilman Vijay Kapoor who has often split with Young and Smith on police and budget issues said he supported the measure for moral reasons. But he said skeptics could look to the “practical reason”: data showing showing large disparities between African Americans and other Asheville residents.

“We don’t want to be held back by these gaps,” Kapoor said. “We want everyone to be successful.”

The council allowed an hour of public comment on the measure. Many who were not able to speak before the vote waited for another hour-long comment period afterward, pushing the meeting late into the night. Most were in support.

Rob Thomas, community liaison for the Racial Justice Coalition which led the push for reparations, thanked the council.

“This is a really, really good gesture as far as the foundation of what we can build. The potential of what can come out of this document is amazing.”

Increasing generational wealth — something African Americans were deprived of through economic and regulatory discrimination — should be the focus, he said.

It was also important that Buncombe County’s government join, Thomas said, to ensure issues weren’t lost between the county and city.

The county’s Board of Commissioners which governs all of Buncombe including municipal residents is not clearly behind the reparations measure though it has a 4-3 Democratic majority.

A few callers spoke against reparations, one linking it to a Venezuelan government plot and others saying Black Lives Matter was Marxist.

But David Greenson said white people like him needed Black people to get reparations “because our souls are in jeopardy.”

“I am responsible for the beating of Johnnie Rush in August of 2017,” he said referencing the infamous beating of an unarmed Black Asheville pedestrian by a police officer. “I may not have hit him or tased him or choked him, but I paid the man who did.”

This breaking story will be updated.

Joel Burgess has lived in WNC for more than 20 years, covering politics, government and other news. He’s written award-winning stories on topics ranging from gerrymandering to police use of force.