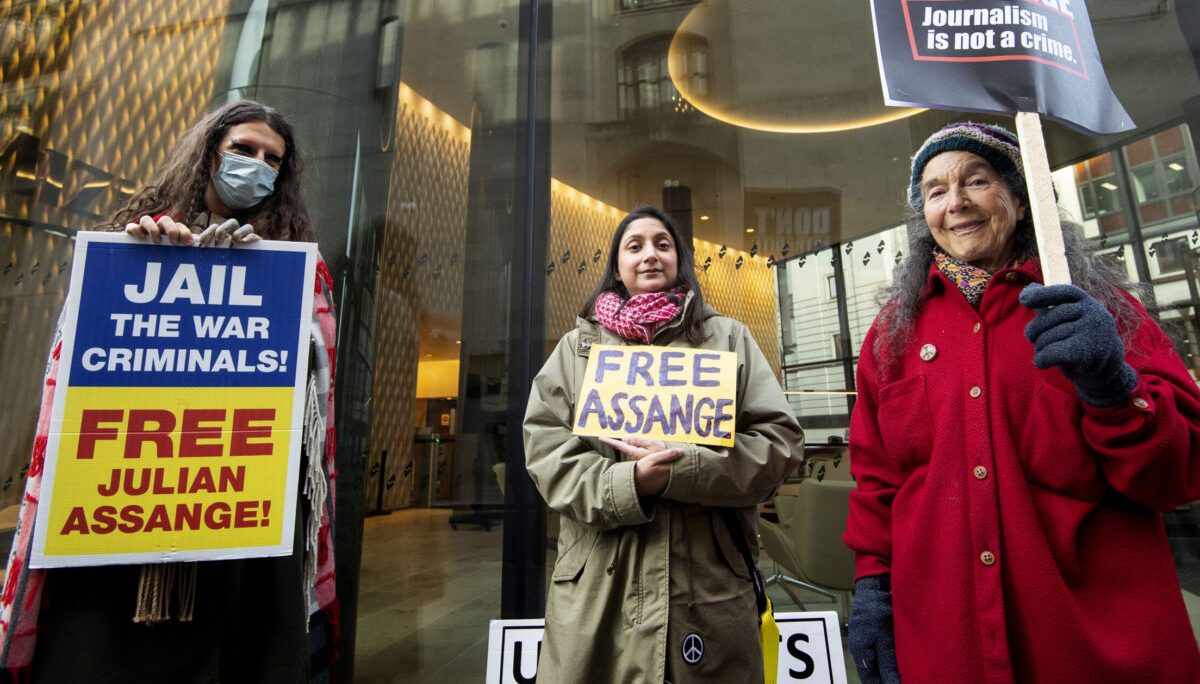 Wikileaks founder Julian Assange could be left “twiddling his thumbs” in a cell the size of a parking space if extradited to the US, a court has heard.

The 49-year-old is fighting extradition to the US on charges related to leaks of classified documents allegedly exposing war crimes.

Assange’s defence have claimed he is a “high” suicide risk, having already spent 16 months in top security Belmarsh jail in south London.

On Monday, the Old Bailey heard from witnesses with experience of the Alexandria Detention Centre in Virginia, Assange’s likely pre-trial destination if he was extradited.

The court heard that due to his high profile and his perceived national security risk, he could be placed in an administrative segregation (ad seg) unit.

Prisoner advocate Joel Sickler told the court there was a historical tendency of detainees with “some notoriety” or facing allegations involving national security to be placed in “ad seg”.

Assange’s case involved “broad publicity internationally” and the US government allegation that he was a “national security concern, if not outright threat”, the witness said.

Sickler added that there were issues over Assange’s safety from the “more sophisticated inmate population” and self harm.

On conditions in an “ad seg” unit, he said: “It’s a very small confined space with a steel door and a small window, a little slot where meals are pushed through.

“It’s a very small area – like a parking space.”

Sickler said there would be limited contact with other inmates, saying the suggestion they could communicate between cells was “ridiculous”.

He said: “You have to scream. There’s a lot of noise and a lot of screaming because from a mental health standpoint, people are angry and confused and there’s a lot of yelling.”

On the issue of sensory deprivation, he said: “First of all you have very limited social interaction with any others.

“You have little access to the outside world except from a rare few monitored phone calls and meeting with counsel.

“You are twiddling your thumbs. You have access to reading material but otherwise your whole world is the four corners of that room.”

Defence barrister Edward Fitzgerald QC asked: “If someone wishes to commit suicide in pre-trial detention would it be possible to stop that?”

Sickler said: “Based on decades of experience, I have probably had a dozen or so clients commit suicide. I can say if they are intent on committing suicide, it can be done.”

Clair Dobbin, for the US government, pointed out there had been no reported suicides at the ADC facility since the last inspection in 2017.

Sickler conceded the point, but added: “My concern, what I tried to project overall, is that when you are held in ad seg, it’s a very, very arduous, almost torturous condition of confinement. That’s really my point.

“Mr Assange, from what I gather reading the medical documents, has depression, is on the autism spectrum, there are other issues and he’s going into isolation confinement and it’s going to be deleterious.”

Professor Michael Kopelman told the court last week that Assange is at “high risk” of taking his own life.

James Lewis QC, for the US government, had questioned Prof Kopelman’s finding based upon Assange’s claims that he was put in solitary confinement in Belmarsh after prison guards found a razor blade in a pile of underpants in his cell.

Lewis said it was “bizarre” the razor incident did not appear on any of Assange’s prison notes.

But later, the defence produced a written prison report confirming the razor blade incident of May 2019 and suggesting records could not be relied upon to be complete.

Chinese contemporary artist Ai Weiwei staged a silent protest against Assange’s extradition outside the Old Bailey on Monday morning because “all the words we want to say are already there”.

Assange’s case has attracted the support of high-profile figures including fashion designer Dame Vivienne Westwood, actress Pamela Anderson, and rapper MIA, who have spoken out in various forms for the Free Assange campaign.

Weiwei told PA Assange represents “a core value of why we are free”.

Weiwei, who knows Assange personally and has visited him at the Ecuadorian embassy and HMP Belmarsh high security prison in London, said: “It’s getting more and more difficult for him.

“He is prepared to fight, but this is not fair to him.”

“He truly represents a core value of why we are free – because we have freedom of the press.

“We have to have that, to protect that value, otherwise who knows what’s going to happen.”

When asked why he chose to protest silently, Weiwei said: “I think all the words we want to say are already there. To add anything, it’s just repeating.”

Assange’s father, John Shipton, who was also protesting outside court, said Weiwei’s support for his son gives his cause “international meaning”.

“Ai Weiwei is an artist of gigantic international standing, he stands alongside Julian to give the fight international meaning,” he said.

“Really, he’s a tremendous man, I’ve known him for a few years now, we met at Belmarsh together, and he’s got a wonderfully steady nerve, you’d like him alongside you in any situation.”

Father-of-two Assange faces an 18-count indictment in the US alleging a plot to hack computers and conspiracy to obtain and disclose national defence information.