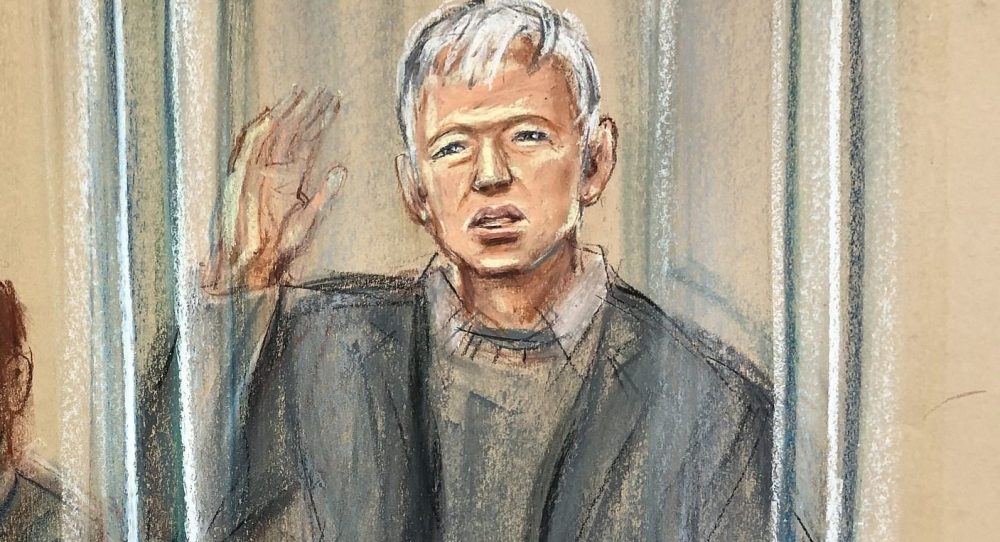 Above: Courtroom sketch of Julian Assange behind glass partition during extradition hearing.

“The new indictment does not add additional counts to the prior 18-count superseding indictment returned against Assange in May 2019,” the DOJ said in a press release.

“It does, however, broaden the scope of the conspiracy surrounding alleged computer intrusions with which Assange was previously charged,” the release said. “According to the charging document, Assange and others at WikiLeaks recruited and agreed with hackers to commit computer intrusions to benefit WikiLeaks.”

The DOJ release said the new indictment alleges that,

“In 2012, Assange communicated directly with a leader of the hacking group LulzSec (who by then was cooperating with the FBI), and provided a list of targets for LulzSec to hack.  With respect to one target, Assange asked the LulzSec leader to look for (and provide to WikiLeaks) mail and documents, databases and pdfs.  In another communication, Assange told the LulzSec leader that the most impactful release of hacked materials would be from the CIA, NSA, or the New York Times. WikiLeaks obtained and published emails from a data breach committed against an American intelligence consulting company by an ‘Anonymous’ and LulzSec-affiliated hacker. According to that hacker, Assange indirectly asked him to spam that victim company again.”

The indictment quotes Assange at hacking conferences encouraging hackers to obtain a “Most Wanted Leaks” list of classified materials that WikiLeaks sought to publish.

It provides new allegations that Assange instructed a “teenager” from an unnamed NATO country to conduct various hacks “including audio recordings of phone conversations between high-ranking officials” of the NATO nation as well as members of parliament from that country. The indictment claims Manning “downloaded classified State Department materials” about this country.

WikiLeaks has identified the “teenager” as Sigurdur Thordarson, “a diagnosed sociopath, a convicted conman, and sex criminal” who had impersonated Assange to embezzle money from WikiLeaks.

One year ago WikiLeaks predicted the DOJ would rely on a convicted fraudster, Sigurdur Thordarson, to make up more bogus claims:

June 7 2019 @Wikileaks Press Release ‘DOJ preparing to file additional indictment against #Assange based on testimony by a convicted conman’ pic.twitter.com/9q0aYmCJjM

Thordarson, an Icelander, became an FBI informant, and was flown to Washington in May 2019 for an interview with the FBI.

The superseding indictment says Assange was allegedly able to learn from “unauthorized access” to a website of this government that police from that country were monitoring him. The indictment says the source of this information was a former member of Anonymous who worked with WikiLeaks named Sabu, identified in the press as Hector Monsegur, who became an FBI informant after being arrested in June 2011.

In the same month, Iceland’s Interior Minister Ögmundur Jonasson prevented FBI agents from entering Iceland, testifying that “FBI dirty-tricks operations were afoot against WikiLeaks.” He said the agents had been sent to seek “our cooperation in what I understood as an operation to set up, to frame Julian Assange and WikiLeaks.”  The possibility remains that the new evidence against Assange was obtained in an FBI sting operation.

Jeremy Hammond, a hacker arrested for obtaining the Stratfor files, is named in the new indictment has having revealed information about his activities with Assange to Sabu in December 2011. Last September, Hammond, who was serving a 10-year sentence in Memphis, TN, was brought by prosecutors investigating Assange to Alexandria, VA to compel him to give testimony against Assange. Hammond has refused.

The new indictment repeats the existing espionage and computer intrusion charges. About the latter, the DOJ release said: “In addition, the broadened hacking conspiracy continues to allege that Assange conspired with Army Intelligence Analyst Chelsea Manning to crack a password hash to a classified U.S. Department of Defense computer.”

Assange was helping Manning sign in as an administrator to a system she had legal access to, not to access classified information, but instead to download video games, movies and music videos forbidden to U.S. military personnel, Assange’s lawyers argued during the first week of his extradition hearing in February at Woolwich Crown Court next to Belmarsh Prison in London. Assange is being held there on remand on a U.S. extradition request for 17 counts of espionage and the one for computer intrusion.

In 2010, Robert Parry, one of the best investigative reporters of his era, and the founder of this website wrote that the then-pending plans of the Obama administration to indict Assange “for conspiring with Army Pvt. Bradley Manning to obtain U.S. secrets strikes at the heart of investigative journalism on national security scandals.”

“That’s because the process for reporters obtaining classified information about crimes of state most often involves a journalist persuading some government official to break the law either by turning over classified documents or at least by talking about the secret information. There is almost always some level of ‘conspiracy’ between reporter and source.” [Emphasis added.]

Parry thus admitted to encouraging his sources to turn over classified information even if it meant committing the lesser crime of leaking classified information if it could help prevent a larger crime from being committed. In this way Assange encouraged Manning to turn over material such as the “Collateral Murder” video in the hope that it could end the illegal war in Iraq.

“In most cases, I played some role – either large or small – in locating the classified information or convincing some government official to divulge some secrets. More often than not, I was the instigator of these ‘conspiracies,’” Parry wrote.

“Whether cajoling a nervous government official to expose a secret or exploiting some unauthorized access to classified material – is part of what an investigative journalist does in covering national security abuses. The traditional rule of thumb has been that it’s the government’s job to hide the secrets and a reporter’s job to uncover them.”

The New York Times reported at the time that “federal prosecutors were reviewing the possibility of indicting Assange on conspiracy charges for allegedly encouraging or assisting Manning in extracting ‘classified military and State Department files from a government computer system,’” Parry wrote.

“The Times article by Charlie Savage notes that if prosecutors determine that Assange provided some help in the process, ‘they believe they could charge him as a conspirator in the leak, not just as a passive recipient of the documents who then published them,” wrote Parry.

This is precisely what the Trump Justice Department has done in the first computer intrusion indictment against Assange and now with this superseding one.

Today’s new Superseding Indictment against Julian Assange is a further pathetic attempt by the DOJ to dupe the public. This is about the publics right to know and the right to publish.
Read: https://t.co/xrMava9ud4 pic.twitter.com/5sXJjXJEBs

WikiLeaks identifies the teenage government source in these tweets:

The ‘Star Witness’ of the new superseding indictment is a diagnosed sociopath/ convicted conman/ child abuser/ FBI informant who was found guilty in Iceland of impersonating #Assange https://t.co/Gd249hthhj

A new cache of internal WikiLeaks files obtained by @AP shows that WikiLeaks staffers discussed having Julian Assange skip bail and escape Britain as authorities closed in. By @razhael. https://t.co/jJvstzU00k

The Trump DOJ’s attempt to imprison Julian Assange for working with his source to publish classified documents that exposed US war crimes is the most severe US threat to press freedom since 2016. It’s sickening to watch so many journalists ignore it, & so many liberals cheer it: https://t.co/bF9QaK4Y7l

Only 3 DAYS after this extended, moving interview with my sons fiancee Stella,

& revealing him to be a committed loving partner & father,

the US publicly announces NEW CHARGES against him!

Smearing him as a ‘HACKER’

Joe Lauria is editor-in-chief of Consortium News and a former correspondent for The Wall Street Journal, Boston Globe, Sunday Times of London and numerous other newspapers. He began his professional career as a stringer for The New York Times.  He can be reached at joelauria@consortiumnews.com and followed on Twitter @unjoe.