The UN Working Group on Arbitrary Detention concluded in February 2016 that the governments of the UK and Sweden had forced WikiLeaks publisher Julian Assange into a condition of arbitrary detention in the Ecuadorian embassy in London, where he has been since 2012. The group’s press release stated:

The expert panel called on the Swedish and British authorities to end Mr. Assange’s deprivation of liberty, respect his physical integrity and freedom of movement, and afford him the right to compensation.

Assange has never been charged with a crime in Sweden. At the secret urging of the UK government, Sweden refused for several years to question Assange in London regarding sexual assault allegations. That kept the case in “preliminary investigation” limbo, while Sweden also refused to guarantee that Assange would not be extradited to the United States, where he is likely to face prosecution for his work as a publisher.

Emails between UK and Swedish officials show that Swedish officials were getting “cold feet” in 2013, and were considering dropping the “preliminary investigation” into Assange, but the UK argued forcefully against it.  Last year, Sweden finally dropped the investigation (shortly after it finally agreed to interrogate Assange in London, as it could easily have done years earlier), but the UK has been using the fact that Assange skipped bail as a way to hold the threat of extradition to the United States over his head.

In March of this year, Ecuadorian President Lenin Moreno made the conditions of Assange’s arbitrary detention much worse. For seven months, Assange has been without any means to directly communicate with the public—in other words, to defend himself from relentless attacks and ridicule in Western media. Moreno has not only cut off Assange’s internet and telephone access, but alsoseverely restricted visits. Moreno has openly stated that he silenced and isolated Assange because he objected to Assange’s political statements, but rather than blast Moreno for trampling Assange’s right to free expression and other basic rights, the international press and prominent “human rights” organizations have responded with silence, distortions and even smirks. 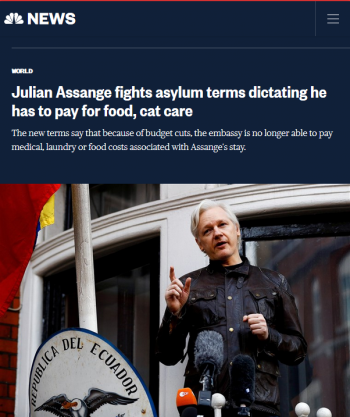 Assange has not had access to the internet since it was cut off in March, [Assange lawyer Baltasar] Garzon added, despite a WikiLeaks statement this week that it had been restored.“Julian Assange Fights Asylum Terms Dictating He Has to Pay for Food, Cat Care,” chuckled an NBC News headline to a Reuters article (10/19/18) by Alexandra Valencia. The article reported inaccurately that

In fact, Wikileaks said that Assange’s isolation was “to be partially lifted,” but then, days before this mocking NBC headline appeared, WikiLeaks had stated:

Although Ecuador stated, hours after UN Special Rapporteurs on Press & Refugees met with its president on Friday, that @JulianASsange’s isolation would be lifted Monday, he remains isolated. A 2 pm appointment on Tuesday, with a legal advisor, was not let into the embassy.

Seems there is no time for accurate reporting about Assange’s treatment when you’re busy making a mean-spirited joke of it all. The Guardian (10/17/18) published an article prominently referring to Assange with the headline “How to Get Rid of an Unwanted Housemate.” Vice (10/22/18) similarly depicted Assange as a rude houseguest abusing the generosity of his hosts:

The Ecuadorian embassy recently demanded that Assange clean his bathroom, feed his cat, and stay out of heated online debates. Now he’s suing them for it. 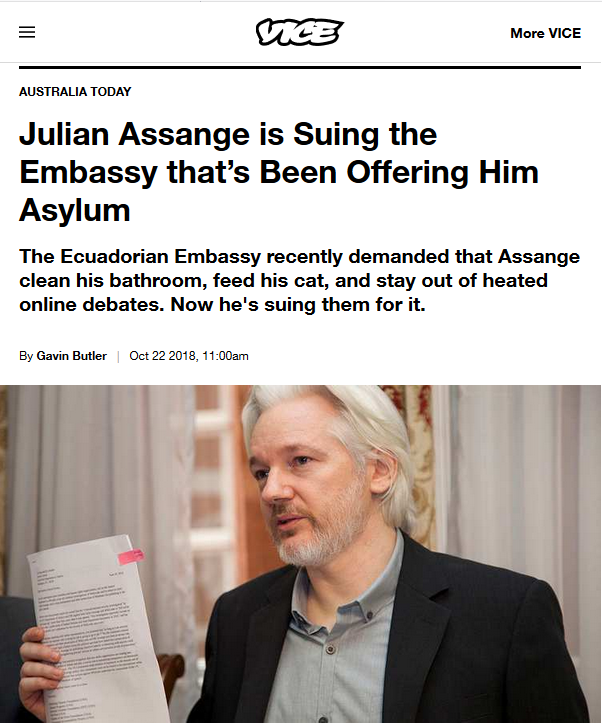 By “stay out of heated online debates,” Vice (10/22/18) means that Ecuador refuses to allow Assange access to the internet unless he agrees not to express political opinions.

How did all these journalists miss that Item 24 of Ecuador’s “recent demands”explicitly prohibits Assange from engaging in any speech that is “political and that could interfere the internal affairs of other states or damage Ecuador’s good relations with another state”? In September, Moreno  told AP (9/27/18):

If Mr Assange promises to stop emitting opinions on the politics of friendly nations like Spain or the United States, then we have no problem with him going online.

I have contacted the Committee to Protect Journalists (CPJ) several times by phone, email and through Twitter over the past few weeks, asking them why I have not found any comment from them denouncing Moreno’s silencing of Assange, explicitly on political grounds. When I finally reached a CPJ official by phone, I was told me they have “reported” on Assange’s case. No kidding. What they haven’t ever done is denounce Moreno’s ruthlessness towards Assange.

In contrast, CPJ frequently criticized Moreno’s predecessor, Rafael Correa (who made the original decision to give Assange asylum) over alleged violations of press freedom. Moreno won the presidency in 2017 by running as a staunch Correa loyalist. Immediately after taking office, Moreno shifted dramatically to the right, disavowed the longstanding ties to Correa that he used to get elected, and, crucially, ensured that public media no longer provided a counterweight to Ecuador’s right-wing private media that always attacked Correa.

Ecuador’s private media is similar to Brazil’s, which did so much to bring an outright fascist to victory in its presidential election. An Ecuadorian journalist was just convicted in Belgium for threatening and harassing Rafael Correa and his daughter. Moreno’s alliance with the private media has enabled him to make audacious attacks on the constitution and judicial independence, while receiving flattering press coverage internationally. As noted in an interview I did with Ecuadorian legal scholar Oswaldo Ruiz-Chiriboga (CounterPunch, 10/12/18), Jose Miguel Vivanco, the Americas director for Human Rights Watch, has frequently applauded Moreno for those attacks.

To be fair, another Human Rights Watch official, Dinah Pokempner, said in April:

Whether it agrees or not with what Julian Assange says, Ecuador’s denying him access to the Internet as well as to visitors is incompatible with its grant of asylum. His refuge in the embassy looks more and more like solitary confinement.

In an op-ed in which Pokempner also criticized Moreno, she wrote that Human Rights Watch had been denied permission to visit Assange in May. That hasn’t stopped Vivanco from gushing over Moreno’s government since that visit was denied.

As mentioned above, Assange (who was made an Ecuadorian citizen by Moreno’s government in a failed tactical move to end his stay in the embassy) is suing Moreno’s government in Ecuadorian courts. However, Moreno has a handpicked body (the “transitory” CPCCS) sitting atop the entire judiciary (CounterPunch, 10/12/18). It has illegally fired the Constitutional Court, the National Electoral Council and numerous other authorities. Winning against Moreno under these conditions will be very tough, given that judges who displease Moreno will likely be fired or otherwise disciplined—including by being smeared in Ecuador’s public and private media. You can count on the international press and “press freedom” organizations either saying nothing or laughing it off, unless truly independent voices speak up.