Assange Trial: US And UK Militaries Back Key Prosecution Witness

Above photo: US Secretary of Defence Leon Panetta speaks at Kings College in London, England, 18 January 2013. DoD / Erin A. Kirk-Cuomo.

Revealed: Key Assange prosecution witness is part of academic cluster which has received millions of pounds from UK and US militaries.

Giving evidence as an expert witness for the US prosecution, Dr Blackwood rebutted other experts’ findings on the seriousness of Assange’s condition, adding his suicide risk was “manageable”. He told the court: “Mr Assange has proved himself to be a very resilient and very resourceful man and he has underplayed that”.

At the request of US prosecution lawyers, Dr Blackwood examined Assange during two meetings in March. In his written submission to the court, he said that it would “not be unjust” to extradite Assange to the US.

Declassified has discovered that Dr Blackwood’s professional work at KCL is linked to a cluster of academic groups which are funded by or associated with the British and American militaries.

Declassified has seen a contract showing that the Ministry of Defence (MOD) provided more than £2-million to KCL’s Institute of Psychiatry for the years 2013-16 for a project which KCL is forbidden to mention in public without MOD approval. It is likely the contract has been renewed and is still active.

The project is managed “on behalf of the Secretary of State for Defence” and is for Phase 4 of a “wellbeing” study of veterans of Britain’s recent military campaigns in Iraq and Afghanistan. Seeking to “inform MOD decision making”, the project began in 2003.

The value of the first three phases of the contract is not known but if the Institute of Psychiatry received a similar level of funding for phase 4 as they had previously, the total contract value would be over £8-million. A spokesperson for the Institute refused Declassified’s request to divulge the amount of funding from the MOD.

Dr Blackwood works in the Department of Forensic and Neurodevelopmental Sciences which is part of KCL’s Institute of Psychiatry, Psychology and Neuroscience. He told Declassified he was aware of MOD funding the Institute in which he works, but said he had never personally worked on an MOD contract.

Asked by Declassified if he declared any conflicts of interest to the hearing, Blackwood responded, “I had no conflicts to declare”.

However, Declassified has found that the Forensic Research Group (FRG) that Dr Blackwood heads at KCL — and which “explores the complex relationship between mental disorders and crime” — is conducting research which uses data from Phase 3 of the MOD-funded project.

US Department of Defense

The King’s College website states that the KCMHR is “the leading civilian UK centre of excellence for military health research and independent of the UK Ministry of Defence”. The Centre notes that it also “collaborates” with the UK Ministry of Justice and the US Department of Defense.

The KCMHR is a “joint initiative between the Institute of Psychiatry and the Department of War Studies and makes significant contributions to UK military personnel policy”, the university website states.

KCL’s Departments of War Studies and Defence Studies “have a number of contracts/agreements with various departments within government, including the Cabinet Office, the Foreign and Commonwealth Office, and the Ministry of Defence”, according to a response to a Freedom of Information Act request sent to KCL by Declassified.

However, “more specific information” on the contracts themselves was withheld by KCL because “the majority of contracts are listed as classified under UK security legislation. This means we are not permitted to disclose details, since they predominantly involve areas either directly or pertaining to the UK security services.”

The university also said disclosure would damage its commercial opportunities. “Two of the largest contracts [with the UK government] are due for renewal in the next 12 months and will go to open tender”, it explained.

US Defence Secretary Leon Panetta visited King’s College War Studies Department in 2013, saying: “I deeply appreciate the work that you do to train and to educate our future national security leaders, many of whom are in this audience.”

Panetta, who also served as director of the CIA from 2009 to 2011, recently said in an interview that the purpose of prosecuting Assange was to stop other journalists revealing information about the US government: “All you can do is hope that you can ultimately take action against those that were involved in revealing that information so you can send a message to others not to do the same thing.”

One of the two co-directors of the KCHMR, which collaborates with Dr Blackwood’s Forensic Research Group, is Nicola Fear, a professor of epidemiology and a former MOD staffer who is on the study team working on the MOD “wellbeing” project.

According to the Centre, Professor Fear “leads several studies… which have been awarded funding from the UK Ministry of Defence and the US Department of Defense”.

One recent project led by Professor Fear for the KCHMR which was funded by the US Department of Defense studies how the military deployments of parents affect children’s emotional development.

A biography of Professor Fear notes that “Nicola frequently briefs senior government officials and military leaders on the work of KCMHR and the impact of service life on personnel, veterans and families.” From 2014-15, she worked on a US Army contract.

Declassified has also discovered other KCMHR projects funded by the US Department of Defense. Different KCL researchers have received funding from the US Office of Naval Research for a project which “examined the political, social, and the strategic dimension of cyber security”.

The KCMHR’s other co-director is the vice dean of Academic Psychiatry, Professor Sir Simon Wessely, who is one of the “approved” researchers on the MOD “wellbeing” contract.

The KCHMR has been developing data-sharing links with colleagues in the US, according to the university’s webpage. “We want to make increasing use of the possibilities of electronic data linkage, reflecting the fact that the UK and US have been fighting the same war”, Professor Wessely is quoted as saying.

Wessely and Fear are two of the four members of the “senior team” of KCL’s Academic Department of Military Mental Health (ADMMH) which, according to KCL’s website, appears to be funded solely by the MOD. The ADMMH “works directly” with the KCMHR, with whom it shares a research policy, and has “both academic and military personnel seconded to the unit”.

The other two senior members of the ADMMH, Lt Col Norman Jones and Major Amos Simms, are both serving UK military personnel.

The ADMMH says its “mission is to act as the uniformed focus for military mental health research” for the UK military. It adds: “The centre aims to gather, assess and report on information that will enhance the health and operational effectiveness of the United Kingdom’s Armed Forces”.

Dr Blackwood told Declassified he had never personally worked with the KCMHR, adding that his “colleague” has “worked with” the Centre examining Post-Traumatic Stress Disorder (PTSD) in the ex-service population.

That colleague, Dr Deirdre MacManus, is the co-team leader with Dr Blackwood of the Forensic Research Group and—according to the KCL website—a member of the KCMHR team. She is also part of the study team working on the MOD “wellbeing” contract.

MacManus, a clinical senior lecturer in forensic psychiatry, has been funded directly by the UK military to produce research. MacManus also appears to have published a number of outputs produced from the MOD “wellbeing” contract alongside academic papers co-authored with, among others, a serving member of the British army.

Dr MacManus and Dr Blackwood co-authored an academic paper in September 2019 on the subject of PTSD in prisons, which “identified significant associations between PTSD and suicidality”. This was a subject on which Blackwood gave evidence to the Assange hearing.

The War Studies Department at KCL, which co-founded the KCMHR with the Institute of Psychiatry, is also linked to the UK and US intelligence community.

The Department was in the mid-2000s commissioned by the “professional head of intelligence analysis” — working within the Cabinet Office’s Intelligence and Security Secretariat — “to develop a course for experienced [intelligence] analysts” in order to “enhance the analytic capability of the United Kingdom’s intelligence community”.

A study titled “Teaching Intelligence Analysts in the UK” and published in the US Central Intelligence Agency (CIA)’s in-house journal, notes that: “Exposure to an academic environment, such as the Department of War Studies at King’s College London, can add several elements that may be harder to provide within the government system.”

Co-written by David Omand — a former director of the UK’s largest intelligence agency, GCHQ, who teaches on KCL’s War Studies course — the article notes that “the CIA had recognized as early as 1960 how beneficial it would be to use universities as a means of intelligence training”.

The paper continues by noting that KCL “offers a containing space in which analysts from every part of the [intelligence] community can explore with each other the interplay of ideas about their profession”.

The Department of War Studies is currently home to a number of personnel connected to the US military and intelligence community.

The university also runs a cross-department centre — called the Academic Centre of Excellence in Cybersecurity Research — which brings King’s College academics together to look at the “socio-technical aspects of cyber security”. The body runs “in association” with the National Cyber Security Centre, an arm of GCHQ.

Consent of the MOD

The contract seen by Declassified is made out between the “Secretary of State for Defence” and the “Institute of Psychiatry, King’s College London”. Worth £2.17-million, Phase 4 of the project ran from February 2013 to January 2016. Earlier phases were renewed in 2006 and 2010.

The Institute for Psychiatry refused to disclose to Declassified the total level of funding provided by the MOD, saying that the university’s “web pages are very comprehensive and should help with your queries”. KCL’s website does not appear to provide such details.

The contract stipulates that KCL cannot “without the prior written consent of the [MOD], advertise or publicly announce that work is being undertaken for the [MOD].” It adds that KCL researchers “may not communicate on these matters with any communications media representatives” unless they are granted written permission by the MOD.

Declassified searched the British government’s contract database and could find no other contract between the MOD and a department of psychiatry in the UK.

The contract states that “the Ministry of Defence did not expect, and was unprepared for, the criticism that arose some years after the 1991 Gulf conflict over the so-called ‘Gulf War Syndrome.’ ” The project’s purpose is to “have early warning of any similar problem arising from the invasion of Iraq in 2003, and to be in a position to respond appropriately with targeted medical research”. 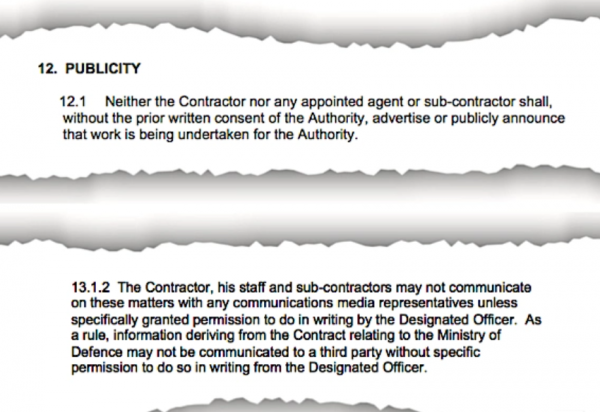 Excerpts from the contract between King’s College’s Institute of Psychiatry and the UK Ministry of Defence.

Funding of the Forensic Research Group

The group does, however, receive funds from organisations associated with the British military. One of its six listed funders is Help for Heroes, which supports wounded military personnel. The organisation receives funds from the Armed Forces Covenant Fund Trust, an MOD-funded charity that was until 2018 based inside the ministry.

Another funder of the Forensic Research Group is the Forces in Mind Trust (FIMT), which supports former British military personnel. The chair of FIMT’s board, Hans Pung, is President of RAND Europe and a former US army officer.

Other directors include Major General Martin Rutledge, who served in UK military headquarters during the Iraq campaign, and General Sir John McColl, a former deputy commander of NATO. DM

Matt Kennard is head of investigations, and Mark Curtis is editor, of Declassified UK, an investigative journalism organisation that covers the UK’s role in the world.