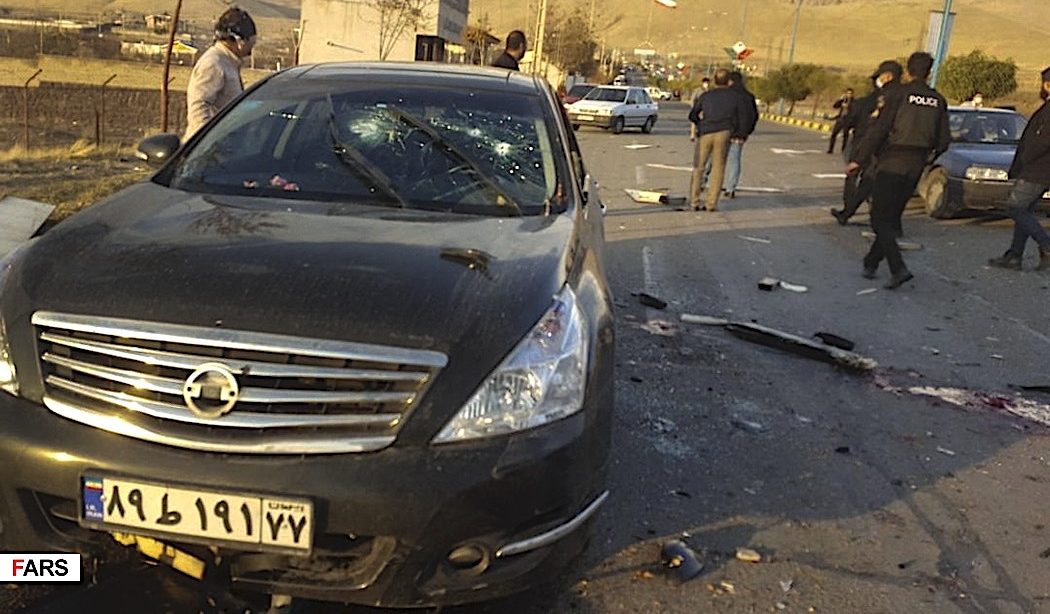 Above photo: Car Fahhrizadeh was driving in when he was assassinated on Friday outside Teheran,. Fars News Agency/Wikimedia Commons.

An Iranian nuclear scientist’s assassination will bolster the hand of Iranian hardliners who don’t want a renewed nuclear deal with the incoming Biden administration.

Israel used all four years of Trump’s presidency to entrench its systems of occupation and apartheid. Now that Joe Biden has won the U.S. election, the assassination of Iran’s top nuclear scientist, likely by Israel with the go-ahead from the U.S. administration, is a desperate attempt to use Trump’s last days in office to sabotage Biden’s chances of successful diplomacy with Iran. Biden, Congress and the world community can’t let that happen.

On Friday Iran’s top nuclear scientist, Mohsen Fakhrizadeh, was assassinated in the Iranian city of Absard outside of Tehran. First, a truck with explosives blew up near the car carrying Fakhrizadeh. Then, gunmen started firing on Fakhrizadeh’s car.

The immediate speculation was that Israel had carried out the attack, perhaps with the support of the Iranian terrorist group the People’s Mujahedin Organization of Iran (MEK). Iranian Foreign Minister Javad Zarif tweeted that there were “serious indications of [an] Israeli role” in the assassination.

All indications indeed point to Israel. In 2018, Israeli Prime Minister Benjamin Netanyahu identified this scientist, Fakhrizadeh, as a target of his administration during a presentation in which he claimed that Israel had obtained secret Iranian files that alleged the country was not actually abiding by the Iran Nuclear Deal. “Remember that name, Fakhrizadeh. So here’s his directive, right here,” Netanyahu said.

Fakhrizadeh was far from the first assassination of an Iranian nuclear scientist. Between 2010 and 2012, four Iranian nuclear scientists were assassinated—Masoud Alimohammadi, Majid Shahriari, Darioush Rezaeinejad and Mostafa Ahmadi Roshan. Though Israel never took official credit for the extrajudicial executions, reports were fairly conclusive that Israel, working with the MEK, were behind the killings. The Israeli government never denied the allegations.

The assassination of Fakhrizadeh also follows reports that the Israeli government recently instructed its senior military officials to prepare for a possible U.S. strike on Iran, likely referring to a narrowly averted plan by President Trump to bomb Iran’s Natanz nuclear site.

Furthermore, there was a clandestine meeting between Netanyahu and Saudi ruler Mohammed bin Salman. Among the topics of conversation were normalization between the two countries and their shared antagonism towards Iran.

Israel’s attacks on Iran’s nuclear activities are particularly galling given that Israel, not Iran, is the only country in the Middle East in possession of nuclear weapons, and Israel refuses to sign the International Treaty on the Non-Proliferation of Nuclear Weapons.

Iran, on the other hand, doesn’t have nuclear weapons and it has opened itself up to the most intrusive international inspections ever implemented. Adding to this absurd double standard is the intense pressure on Iran from the United States—a nation that has more nuclear weapons than any country on earth.

Given the close relationship between Netanyahu and Trump, and the seriousness of this attack, it is very likely that this assassination was carried out with the green light from Trump himself. Trump has spent his time in the White House destroying the progress the Obama administration made in easing the conflict with Iran.

He withdrew from the nuclear deal and imposed an unending stream of crippling sanctions that have affected everything from the price of food and housing, to Iran’s ability to obtain life-saving medicines during the pandemic. He has blocked Iran from getting an IMF $5 billion emergency loan to deal with the pandemic.

In January, Trump brought the U.S. to the brink of war by assassinating Iranian General Qassem Soleimani, and in an early November meeting with his top security advisors, and right before the assassination of Fakhrizadeh, Trump himself reportedly raised the possibility of a military strike against Iran’s nuclear facilities.

After the news broke of the assassination, Trump expressed implicit approval of the attack by retweeting Israeli journalist and expert on the Israeli Mossad intelligence service, Yossi Melman, who described the killing of Fahkrizadeh as a “major psychological and professional blow for Iran.”

Iran has responded to these intense provocations with extreme patience and reserve. The government was hoping for a change in the White House and Biden’s victory signaled the possibility of both the U.S. and Iran going back into compliance with the nuclear deal.

This recent assassination, however, further strengthens the hands of Iranian hardliners who say it was a mistake to negotiate with the United States, and that Iran should just leave the nuclear deal and build a nuclear weapon for its own defense.

Iranian-American analyst Negar Mortazavi bemoaned the chilling effect the assassination will have on Iran’s political space. “The atmosphere will be even more securitized, civil society and political opposition will be pressured even more, and the anti-West discourse will be strengthened in Iran’s upcoming presidential election,” she tweeted. 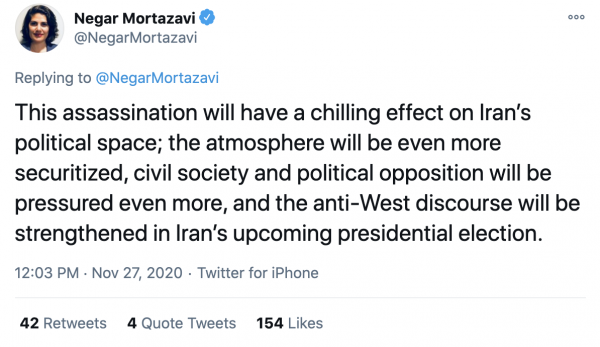 The hardliners already won the majority of seats in the February parliamentary elections and are predicted to win the presidential elections scheduled for June. So the window for negotiations is a narrow one of four months immediately after Biden’s inauguration. What happens between now and Jan. 20 could derail negotiations before they even start.

See the full text of a letter from Iran’s United Nations ambassador to the UN secretary general on the assassination at the end of this article.

Jamal Abdi, president of the National Iranian American Council, said that U.S. and Israeli efforts to sabotage Iran’s nuclear program “have now morphed into Trump & Netanyahu sabotaging the next U.S. President. They are trying to goad Iran into provocations & accelerating nuclear work—exactly what they claim to oppose. Their real fear is U.S. & Iran talking.” 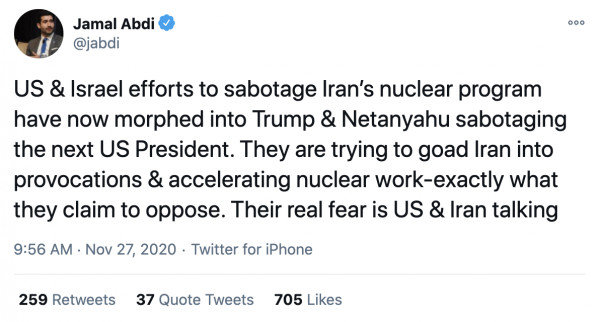 That’s why U.S. members of Congress, and President-elect Biden himself, must vigorously condemn this act and affirm their commitment to the U.S. rejoining the nuclear deal. When Israel assassinated other nuclear scientists during the Obama administration, Secretary of State Hillary Clinton denounced the murders, understanding that such illegal actions made negotiations infinitely more difficult.

The European Union, as well as some important U.S. figures have already condemned the attack. Connecticut Senator Chris Murphy pointed out the risks involved in normalizing assassinations, how the killing will make it harder to restart the Iran Nuclear agreement, and how the assassination of General Soleimani backfired from a security standpoint.

Former Obama advisor Ben Rhodes tweeted that it was an “outrageous action aimed at undermining diplomacy,” and former CIA head John Brennan called the assassination “criminal” and “highly reckless,” risking “lethal retaliation and a new round of regional conflict,” but rather than putting the responsibility on the U.S. and Israel to stop the provocations, he called on Iran to “be wise” and “resist the urge to respond.” 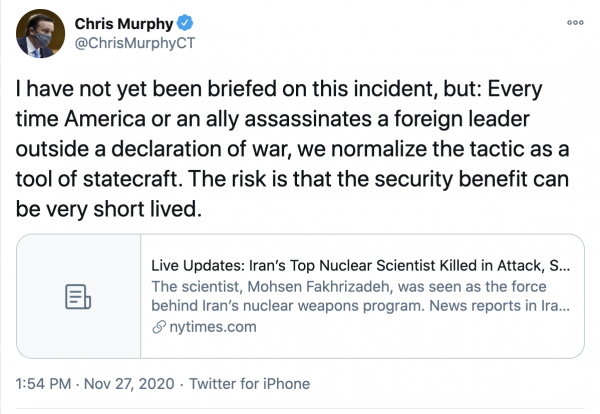 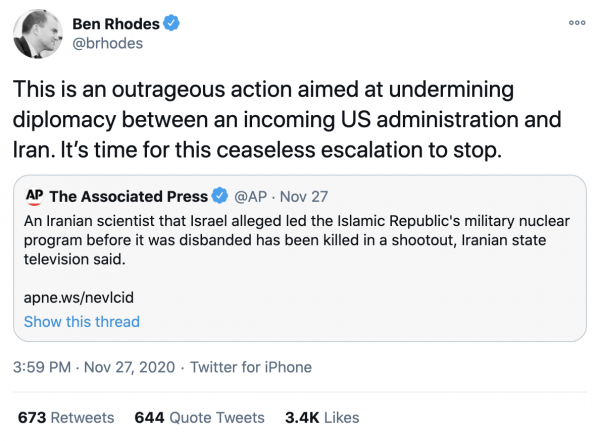 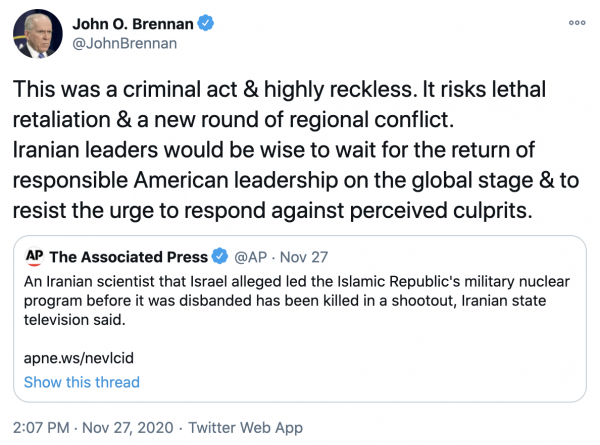 Many on Twitter have raised the question of what the world response would be if the roles were reversed and Iran assassinated an Israeli nuclear scientist. Without a doubt, the U.S. administration, whether Democrat or Republican, would be outraged and supportive of a swift military response. But if we want to avoid escalation, then we must hope that Iran will not retaliate, at least not during Trump’s last days in office.

The only way to stop this crisis from spiraling out of control is for the world community to condemn the act, and demand a UN investigation and accountability for the perpetrators. The countries that joined Iran and the United States in signing  the 2015 nuclear agreement —Russia, China, Germany, the UK and France—must not only oppose the assassination but publicly recommit to upholding the nuclear deal.

President-elect Biden must send a clear message to Israel that under his administration, these illegal acts will have consequences. He must also send a clear message to Iran that he intends to quickly re-enter the nuclear deal, stop blocking Iran’s $5 billion IMF loan request, and begin a new era of diplomacy to dial back the intense conflict he inherited from Trump’s recklessness.

Medea Benjamin is cofounder ofCODEPINK for Peace, and author of several books, including Inside Iran: The Real History and Politics of the Islamic Republic of Iran. She is a member of the writers’ group Collective20.

Ariel Gold is the national co-director ofCODEPINKand runs their Peace with Iran campaign.

I am writing to inform you that today, 27 November 2020 in Absard city of Tehran province, Mr. Mohsen Fakhrizadeh, a prominent Iranian scientist, was assassinated in a terrorist attack. One of the latest services of Martyr Fakhrizadeh was his outstanding role in the development of the first indigenous COVID-19 Test Kit, which is a great contribution to our national efforts in curbing the COVID-19 pandemic at a time when Iran is under inhumane sanctions of the United States, strictly preventing our access to humanitarian goods including medicines and medical equipment. He was also supervising the development of a COVID-19 vaccine.

Over the current decade, several top Iranian scientists have been targeted and assassinated in terrorist attacks and our firm evidence clearly indicates that certain foreign quarters have been behind such assassinations. The cowardly assassination of Martyr Fakhrizadeh — with serious indications of Israeli responsibility in it – is another desperate attempt to wreak havoc on our region as well as to disrupt Iran’s scientific and technological development. While during the past forty years, no amount of pressure and terrorist attacks were able to prevent us from achieving science and technology needed for our socio-economic development.

Warning against any adventuristic measures by the United States and Israel against my country, particularly during the remaining period of the current administration of the United States in office, the Islamic Republic of Iran reserves its rights to take all necessary measures to defend its people and secure its interests.

The Islamic Republic of Iran condemns, in the strongest possible terms, the criminal assassination of Martyr Fakhrizadeh, and expects the Secretary-General of the United Nations and the Security Council to strongly condemn this inhumane terrorist act and take necessary measures against its perpetrators.
I should be grateful if you would have the present letter circulated as a document of the Security Council.

Please accept, Excellency, the assurances of my highest consideration.
I should be grateful if you would have the present letter circulated as a document of the Security Council.

Please accept, Excellency, the assurances of my highest consideration.