At AMA’s Annual Meeting, Doctors And Nurses Demand ‘Get Out of the Way’ Of Medicare For All

Above: Nurses, doctors, and medical students demonstrated outside the annual meeting of the American Medical Association in Chicago on Saturday, demanding the group “get out of the way” in the fight for a Medicare for All program. (Photo: National Nurses United/Twitter).

Note: Protesters also went inside the AMA meeting and interrupted it with a dramatic protest which included a die-in as can be seen in these photos from HOPE in the Midwest – Health Over Profit for Everyone. 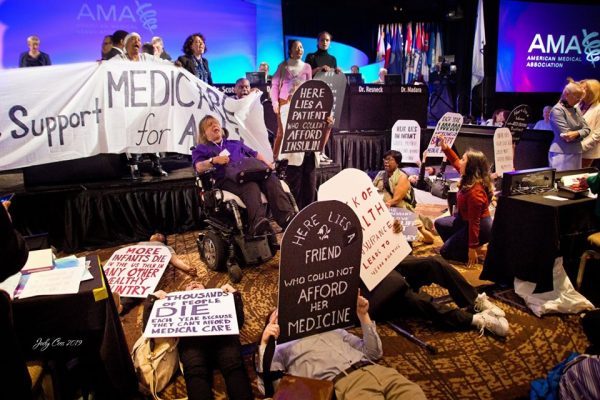 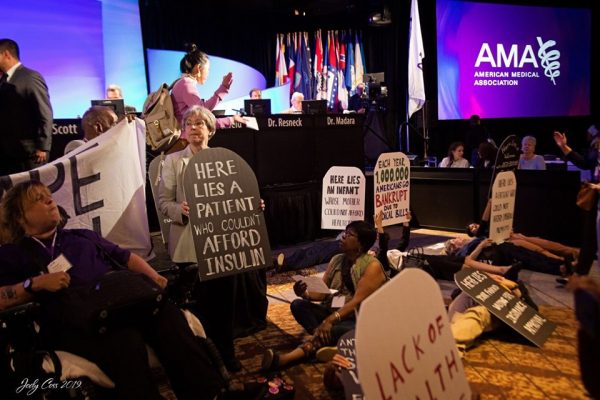 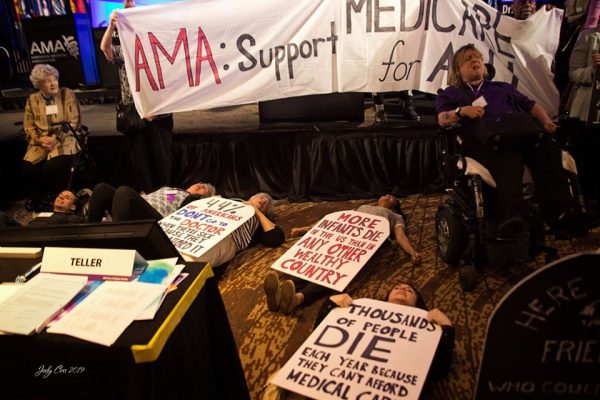 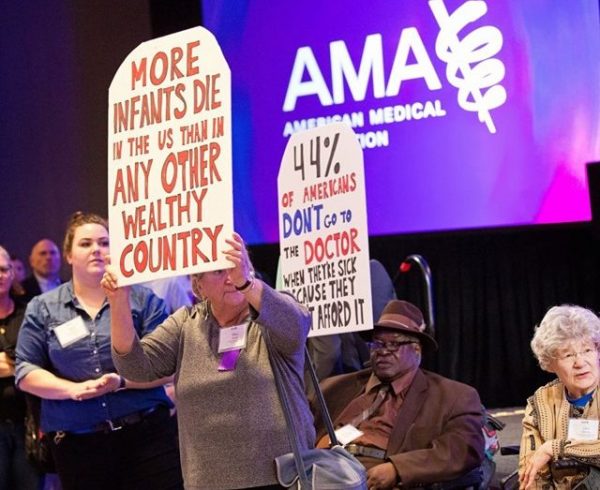 “The AMA is violating one of its most important ethical principles: ‘Do Not Harm.'”

Nurses, doctors, and medical students on Saturday afternoon gathered outside the Hyatt Regency hotel in Chicago, where the largest professional association for physicians was holding their annual meeting, to demand that the group “do no harm” and stop standing in the way of real, meaningful healthcare reform.

National Nurses United (NNU), Physicians for a National Health Plan (PNHP) and Health Over Profit for Everyone (www.HealthOverProfit.org) were among the groups that gathered to call on the American Medical Association (AMA) to support a Medicare for All program, which would replace the for-profit health insurance industry with government-funded healthcare for everyone in the United States.

On social media, the groups used the hashtag #AMAGetOutTheWay to rally support for the protest.

🤑 137 million have suffered due to exorbitant medical costs.

This is what a BROKEN HEALTH CARE SYSTEM looks like.

THANK YOU to @snahp_national and @PNHP for exemplifying what it means to “do no harm” and for your patient advocacy! 🙏❤️✊@AmerMedicalAssn, stand with us in supporting #MedicareForAll or get out of the way! #AMAGetOutTheWay pic.twitter.com/foKf4nr835

Marching to the AMA plaza for their annual meeting to call on them to stop fighting against #MedicareforAll #AMAGetOutTheWay pic.twitter.com/ZwkAvX6xGW

The AMA is a powerful and wealthy lobbying force in Washington, D.C., but as at least one protester’s sign noted at the demonstration, it counts less than 25 percent of physicians among its membership—down from 75 percent in the 1950s.

“The AMA does not speak for us,” another sign read.

The AMA protesters have logged on #AMAGetOutTheWay and support #MedicareForAll pic.twitter.com/OOhxZfRmke

Advocates for a single-payer healthcare program in the form of Medicare for All say the group does not represent the views of the next generation of doctors. PNHP’s organization of medical students also had a large presence at the rally.

Our Revolution President Nina Turner told the crowd that skeptics of Medicare for All should listen to the perspectives of the medical professionals gathered outside the meeting.

“If you don’t believe Medicare for All is important, let’s hear from the people who stand by the bedsides of all of us in our worst moments and who have been its champion before it became popular,” Turner said.

Registered nurse Talisa Hardin accused the AMA of violating the primary oath taken by all physicians by refusing to back Medicare for All.

“The AMA is violating one of its most important ethical principles: ‘Do Not Harm,'” Hardian said. “Healthcare is a human right, and not a privilege!”

We’re demanding that the AMA stand up for their patients: support #MedicareForAll or get out of the way! #AMAGetOutTheWay pic.twitter.com/MWtlSf4v0p

The above article has been edited with additional comments from Popular Resistance.