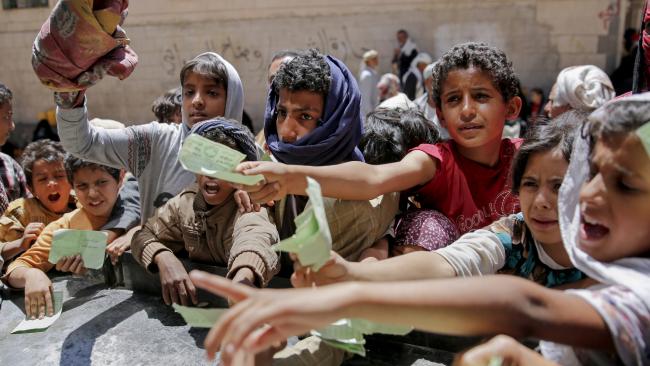 — Nazim Hikmet, I Come and Stand at Every Door

On July 18, 2017, at a U.S. Senate Foreign Relations Committee hearing focused on “The Four Famines: Root Causes and a Multilateral Action Plan,” Republican Senator Todd Young, a former Marine, asked officials present if ongoing war in Yemen could fail to exacerbate the catastrophe developing there – one of four countries, along with Southern Sudan, Nigeria, and Somalia, set to collectively lose 20 million people this year, one third the death toll of WWII, from conflict-driven famine. Yemen is being bombarded and blockaded, using US-supplied weapons and vehicles, by a local coalition marshaled by U.S. client state Saudi Arabia.  Yemen’s near-famine conditions, with attendant cholera outbreak, are so dire that in Yemen it is estimated a child dies every 10 minutes of preventable disease.

At the hearing, Senator Young held aloft a photo of a World Food Program warehouse in Yemen, which was destroyed in 2015. Senator Young asked David Beasley, Executive Director of the World Food Program, to name the country responsible for the airstrike that destroyed the food warehouse. Mr. Beasley said the Saudi-led coalition blockading Yemen had destroyed the warehouse, along with the relief supplies it contained.

A July 2016 Human Rights Watch report documented 13 civilian economic structures destroyed by Saudi coalition led bombing between March 2015 and February 2016, “including factories, commercial warehouses, a farm, and two power stations. These strikes killed 130 civilians and injured 171 more. The facilities hit by airstrikes produced, stored, or distributed goods for the civilian population including food, medicine, and electricity—items that even before the war were in short supply in Yemen, which is among the poorest countries in the Middle East. Collectively, the facilities employed over 2,500 people; following the attacks, many of the factories ended their production and hundreds of workers lost their livelihoods.”

Asked about the Saudi coalition’s destruction of four cranes needed to offload relief supplies in Yemen’s port city Hodeidah, Mr. Beasley clarified that the loss of the cranes has vastly impeded WFP efforts to deliver food and medicines. Senator Young read from Mr. Beasley’s June 27th letter to the Saudi government, only the latest of multiple requests, asking that the WFP be allowed to deliver replacement cranes. Mr. Beasley said the Saudis had provided no reply. Senator Young noted that, in the three weeks since this last letter had been sent, more than 3,000 Yemeni children had died of preventable, famine-related causes.

Medea Benjamin, of the antiwar campaign Code Pink, was at the “Four Famines” hearing, and later thanked Sen. Young for rebuking the Saudi government’s imposition of a state of siege plus airstrikes that prevent delivery of food and medicine to destitute Yemeni civilians:

One day later, the United Nations Refugee Agency (UNHCR) reported on a July 19th coalition airstrike in Yemen, which killed 20 civilians—including women and children—while they were fleeing violence in their home province. The report claimed more than two million internally displaced Yemenis “fled elsewhere across Yemen since the beginning of the conflict, but … continue to be exposed to danger as the conflict has affected all of Yemen’s mainland governorates.”

On July 14, the US House of Representatives overwhelmingly passed two amendments to the National Defense Authorization Act (NDAA) that would potentially end US participation in the Yemeni civil war. In the past, the White House has provided refueling and targeting assistance to the Saudi-led coalition without congressional authorization. Since October of 2016, the US has doubled the number of jet refueling maneuvers carried out with Saudi and United Arab Emirate jets. The Saudi and UAE jets fly over Yemen, drop bombs until they need to refuel, then fly back to Saudi airspace where US jets perform mid-air refueling operations. Next, they circle back to Yemen and resume bombing.

In the summer of 2006, I joined peace campaigner Claudia Lefko at a small school she helped found in Amman, Jordan. The school served children whose families were refugees, having fled postwar chaos in Iraq. Many of the children have survived war, death threats, and displacement. Claudia had worked with children in her hometown of Northampton, Massachusetts, to prepare a gift for the Iraqi refugee children at the Jordanian school. The gift consisted of strings of paper origami cranes, folded in memory of a Japanese child, Sadako, who had died from radiation sickness after the bombing of her home city, Hiroshima.  In her hospital bed (the story goes), Sadako occupied her time attempting to fold 1,000 paper cranes, a feat she hoped would earn her the granting of a special wish, that no other child would ever suffer a similar fate. Sadako succumbed too rapidly to complete the task herself, but Japanese children hearing of her folded many thousands more cranes, and the story has been told for decades in innumerable places, making the delicate paper cranes a symbol for peace throughout the world. The Turkish  writer, Nazim Hikmet, wrote a poem, since set to music, about the story. Its words are on my mind today, as I think of the malnourished children from the countries of the terrible Four Famines, and from other conflict-torn, US-targeted countries such as Iraq, and Afghanistan. I think of their months or years of terrible hunger. Their stories may have ended already during the first half of 2017.

The song about “The Little Girl of Hiroshima” imagines a child who comes and stands at every door, unheard and unseen. In reality, we the living can choose to approach the doors of elected representatives, of our neighbors, or stay at home. We can choose whether or not to be heard and seen. Robert Naiman at Just Foreign Policy points out that many people don’t know yet that the House has voted to prohibit US participation in the Saudi war in Yemen. We can focus on progress made, publicize the House votes on social media, push for a House roll call vote on the Davidson-Nolan prohibitions on Defense Appropriation, and push the Senate to pass the same provisions as the House.  I personally oppose all defense appropriations (I have refused all payment of federal income tax since 1980). I recognize that legislative activism, at the heart of an empire addicted to war, is a tool of limited use; but considering the arriving disaster for which, as too few yet understand, 2017 may be hereafter remembered as the worst famine year in post-WWII history – we have no luxury to reject any tools presented to us.

Billions, perhaps trillions, will be spent to send weapons, weapon systems, fighter jets, ammunition, and military support to the region, fueling new arms races and raising the profits of U.S. weapon makers. But, we can choose to stand at the doors of our leaders and of our neighbors, honoring past sacrifices and the innocent lives we were unable to save, as we redouble efforts to stop war makers from constantly gaining the upper hand in our lives.

We can never reverse the decisions to drop atomic bombs on Hiroshima and Nagasaki, and we cannot prevent all of the dying that is set to come, this fateful summer, in the countries of the Four Famines.  In the song, lost Sadako, long beyond saving even as she folded paper in her bed, doesn’t ask us to erase her own terrible loss, but to achieve the change we can, and to lose no more time in achieving it:

Kathy Kelly co-coordinates Voices for Creative Nonviolence. In Kabul, she is a guest of the Afghan Peace Volunteers. (In the late ‘80s she spent one year in prison for planting corn on nuclear missile silo sites). Read other articles by Kathy.