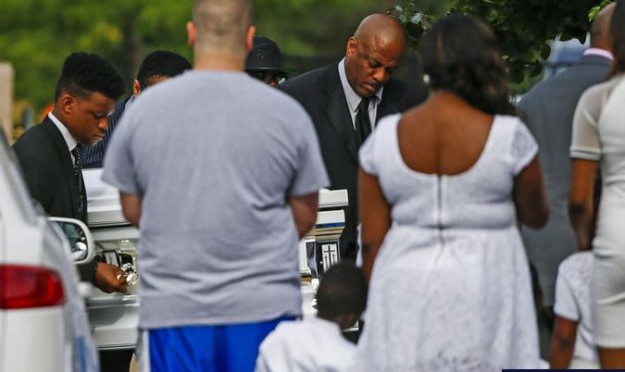 At Sandra Bland’s Funeral, A Mother’s Call To Action

Mother: Sandra’s last words to her were that she wanted to go to the South and stop the injustices against blacks

Sandra Bland’s mother was the last to speak at her daughter’s funeral.

Geneva Reed-Veal’s voice didn’t break as she addressed the hundreds before her; she didn’t shed any tears. She spoke clearly and decisively, determined to raise a call to action with each word.

“I’m the mama, and I’m telling you that my baby did not take herself out,” she said. “The fact is, I’m the mama. And I still don’t know what happened. You think you’re mad? I’m mad too.”

The majority of people attending Bland’s funeral Saturday had never met her. Yet mothers stood in line outside the Lisle church for nearly an hour under the unforgiving sun, a thick layer of sweat forming on their foreheads and those of the crying infants they held in their arms. Teenagers held handwritten signs with photos of Bland they found on Facebook; some young men had made T-shirts that read “#SandySpeaks.”
Those attending Sandra Bland’s funeral were joined by their fierce belief that, whatever the circumstance, the 28-year-old Naperville woman did not deserve to die.
“I don’t know Sandra, and I don’t know what happened,” said Hank Brown, of Chicago. “But I do know she didn’t have to die. There’s an epidemic of police terror in this country, and people need to stand up.”
An autopsy report released Friday found that Bland, who died July 13 in a Waller County Jail cell, used a plastic trash bag to hang herself three days after a confrontational traffic stop on a street northwest of Houston. Bland’s family has questioned the findings, saying she was excited about starting a new job and wouldn’t have taken her own life.
The July 10 traffic stop was captured by a patrol car dashcam. It escalated to an assault arrest when the officer said Bland kicked him.

DuPage African Methodist Episcopal Church was crammed with people from across the nation, many of them wearing royal blue and gold, the colors of Bland’s sorority, Sigma Gamma Rho. When the chapel filled to capacity, the overflow crowd listened via speakers in the lobby or watched on closed-circuit TV in the church’s backroom.

Karen Peterson, of Naperville, has been a church member for more than 20 years and watched Bland grow up with her daughter.

“It could have been my daughter,” Peterson said. “She did the same thing. She went to school, she graduated and she traveled up and down the public highways to get to her job in Virginia, so I could have gotten this call.”

Kelley Chambliss, a Minnesota resident, brought with him a sign constructed of Yoo-hoo cartons, with several black-and-white photos of Bland pasted next to the words “We want answers.”

Chambliss wore a shirt that read “I can’t breathe,” which he made last year in honor of Eric Garner, a black man who died while being arrested in New York City. He plans to make one for Bland soon.

“What happened was unjust, and it moved me,” he said. “Things were looking up for her.”

At the service, vibrant choir hymns acted as a tribute to Bland’s love of music. A skilled trombonist, she attended Prairie View A&M University on a band scholarship and graduated in 2009.

Dozens of wreaths lined Bland’s casket, which was lit by sunlight streaming through the church’s stained-glass windows. Those who spoke included close friends and Bland’s sorority sisters, who smiled or cried as they shared memories. One aunt laughed as she recalled Bland’s eighth-grade graduation and her high school prom.

Many of those who spoke referenced #SandySpeaks, an initiative Bland started last year to use social media to address social injustices. The Rev. Marland Brazier chuckled as he recalled Bland asking to meet with him after Michael Brown was killed in Ferguson, Mo., in August. When they met at a McDonald’s, she pulled out a binder several inches thick filled with ideas for tackling police brutality.

Sen. Dick Durbin told the congregation how, during his trip from Chicago to Lisle for the service, he couldn’t help noticing the number of vehicles that switched lanes without using a turn signal, the same traffic offense Bland was pulled over for.

“There were so many people who weren’t using turn signals, and their lives continue at this very moment,” he said.

He received a standing ovation when he vowed to send a letter to Attorney General Loretta Lynch, demanding a full and unbiased federal investigation into Bland’s death.

Reed-Veal, Bland’s mother, told the congregation that she had a strained relationship with her daughter over the last few years. She spoke of how lucky she felt that, three weeks ago, just one week before her daughter died, the two took a road trip together.

The trip, filled with music, laughter and stories, instantly rekindled their relationship. And Reed-Veal said she couldn’t be more grateful.

“We talked about things she’d done and was disappointed by, and said she was sorry. I said I was sorry,” Reed-Veal said. “To have had that last week with her cleared up everything.”

Now, Reed-Veal finds herself facing a momentous task: Making sure her daughter didn’t die in vain. She said she would bury her daughter, take Sunday off and then, first thing Monday, return the flood of emails and calls she has received from around the world. Little by little, she said, she hopes to unearth every detail of her daughter’s death.

She recalled the last words her daughter spoke to her, in which Bland said, even before she received a job interview, that she wanted to go to the South and stop the injustices against blacks.