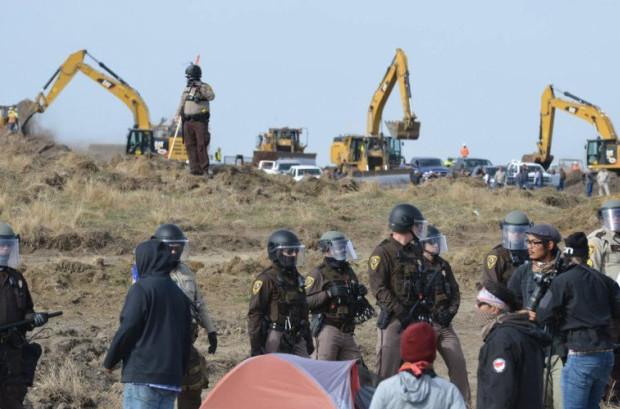 “This is What I Have Been Waiting For My Entire Life”

This time I have been at Standing Rock, North Dakota at the Oceti Shakowin camp to stop the Dakota Access Pipeline (DAPL) for four days during a whirlwind of national and international attention following two terrible displays of police brutality toward the water protectors.

On October 27, over 100 local and state police and National Guard dressed in riot gear with helmets, face masks, batons and other protective clothing, carrying assault rifles stormed the Front Line North camp. They had other military equipment such as Mine Resistant Ambush Protected Personnel carriers (MRAP) and Long Range Acoustic Devices (LRAD) and a full assortment of tasers, bean bag bullets and clubs/batons. They arrested 141 persons, destroyed the Frontline camp and threw the personal possessions of those arrested in garbage dumpsters.  The Morton county sheriff reportedly is investigating the purposeful destruction of personal property.

In another overreaction to the unarmed civilian water protectors, on November 2, police shot tear gas and beanbag bullets at water protectors who were standing in a small tributary to the Missouri River.  They were standing in the frigid water to protect a handmade bridge across the river to sacred burial sites that was being destroyed by the police. Police snipers stood on the ridge of the burial hill with their feet on sacred burial sites.

On October 3, in solidarity with water protectors, almost 500 religious leaders from all over the United States arrived to join water protectors in a day of prayer for stopping the Dakota Access Pipeline.  Retired Episcopal Priest John Flogerty had put out a national call for clergy to come to Standing Rock.  He said he was stunned that in less than ten days, 474 leaders answered the call to stand for protection of Mother Earth.  lDuring the two hour interfaith witness, discussion and prayer near the current digging of the Dakota Access Pipeline (DAPL), one could hear the digging machines destroying the ridge line to the south of Highway 1806.

After the gathering, about 50 of the group drove to Bismarck, the capital of North Dakota, to call on the Governor of the State to stop the pipeline.  14 clergy sat down in the rotunda of the capitol in prayer, refused to end their prayers and leave the capitol building when ordered by the police and were arrested.

Another five people were arrested 30 minutes laterwhen storm troopers were deployed to intimidate the remainder of the group when they walked across the street toward the sidewalk in front of the Governor’s ranch style house to kneel in prayer.  The women arrestees were transported 4 hours to a county jail in Fargo, North Dakota when a women’s cell was available in Bismarck.  Two of the men arrested were shocked when they were told that the women arrestees had been taken to Fargo as they had been placed by themselves in a cell that would accommodate ten that was filled with feminine hygiene products.  The men arrestees also said that their cash was taken and the jail issued a check for the cash, resulting in their having NO cash upon release making getting a cab or buying food virtually impossible as taxis and grocery stores generally don’t cash checks.  Instead, those emerging from jail are told to go to a bank to cash the checks which are located far from the jail and probably closed when arrestees are released.

On Saturday, November 5, tribal council leaders arranged for a ceremony for horses as the plains Indians are “descendants from a powerful horse nation.”  Tribal leader John Eagle reminded the approximately 1,000 persons in a large circle at the new Tribal Council Sacred Fire, that in August 1876, 4,000 horses were taken by U.S. military from the Lakota in what is known as the Battle of Greasy Grass, and known to the U.S. military as the Battle of the Little Bighorn.  He also mentioned for the non-Sioux that the Sioux word for horse means “my son, my daughter.”  He said that the return of horses to the sacred fire would be a healing for the horses for their genetic memory of the treatment of their ancestors in the past century as well as a healing for the native American population for the genetic trauma for their historical treatment of their ancestors.  Healing for many at Standing Rock from their recent violent treatment by police and North Dakota National Guard, was an important aspect of the ceremony.

Chief John Eagle pointed out that many Native Americans have joined the military and that as combat veterans, they have double post traumatic stress (PTS), first from their treatment as Native Americans and second as combat veterans.  John emphasized that for native combat veterans in particular, it is important to use the word “water protectors,” as the terms “demonstrators and protestors” may trigger a PTSD response from their days in the U.S. military. He said that he could see PTSD in the eyes of many who went through each of the recent encounters with the police.

As John Eagle explained the purpose of the ceremony, in the distance galloping down the road of flags into the Oceti Sankowin camp came 30 horses and riders.  With “peace cries” not war cries, the large 1,000 person circle opened to welcome the horses and riders. They circled the sacred fire many times to the every increasing “peace cries” and the beating of a large drum. He called on each “water protector” to have courage in their hearts to overcome anger and fear and to turn to prayer, as the police and government don’t know how to deal with nonviolence and prayer.  Leaders asked that no one take photos of the sacred ceremony once the horses entered the circle.

Another leader said that Native Americans must begin forgiving rather than waiting for an apology for their treatment by the U.S. government. He predicted that the U.S. government will never give an apology and that unless Native Americans forgive the pain the live in, they will live in anger.  “Lives are better if one can forgive,” he said.  “We must change and we must change our treatment of Mother Earth.”

The son of American Indian Movement (AIM) leader Russell Means told of being in the Front line camp and being clubbed by police as he protected an elder woman.  He said that he felt that he had seen violence unfold before, that the treatment by police in 2016 was “familiar in our blood.”  Means also reminded everyone to help the young water protectors who are having difficulty in coping with their experiences with the police in the past two weeks.

As the ceremony was ending approximately thirty Navajo Hopi youth and adult supporters arrived into the circle after running from Arizona.  Greeted by great cries from the 1,000 persons in the circle, a 15 year-old Hopi youth in sobs said, “150 years ago we were forced to run away from our homes but today we have run to help keep your and our homes, in a prayerful spirit, but to show the government that it cannot make us run away again.”

As I walked from the circle, an older Sioux woman told me that she had been at the Front Line camp the day it was destroyed.  She had been sitting in prayer when the police stormed in, roughed people up, broke up the camp and arrested her.  She said that she has been in the camp for three months and will stay until the camp ends.  In tears, she said, “I am now living as my ancestors lived…in nature all day, everyday, in community living, working and praying together.  I have been waiting for this gathering all my life.”