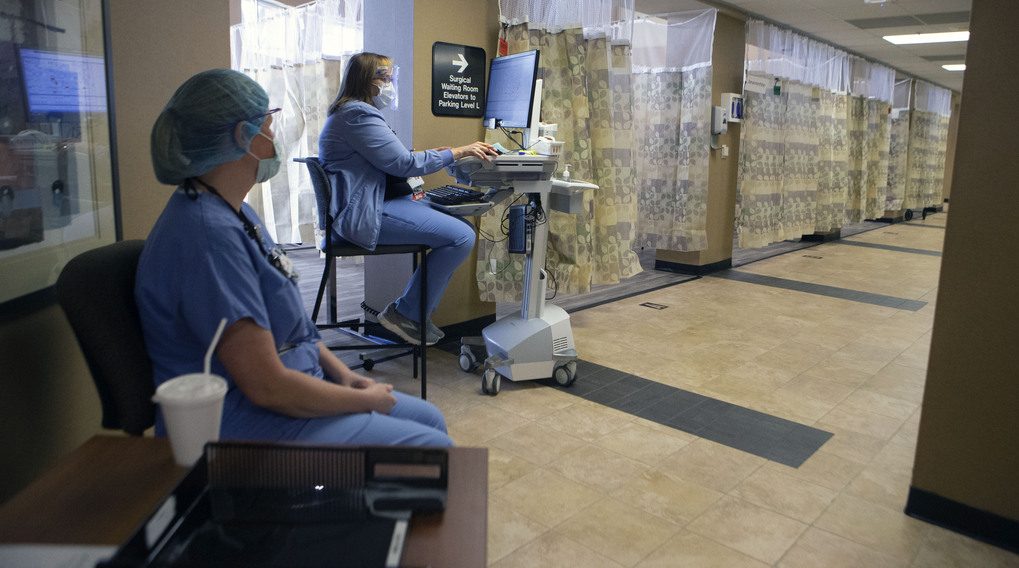 Athletes Get COVID-19 Tests While Nurses Are Refused Testing

Above photo: Nurses at Stormont Vail Health System position themselves in a hallway that was made into hospital room. Evert Nelson / The Topeka Capital-Journal via AP.

On her day off not long ago, emergency room nurse Jane Sandoval sat with her husband and watched her favorite NFL team, the San Francisco 49ers. She’s off every other Sunday, and even during the coronavirus pandemic, this is something of a ritual. Jane and Carlos watch, cheer, yell — just one couple’s method of escape.

For Sandoval, though, it has become more and more difficult to enjoy as the season — and the pandemic — wears on. Early in the season, the 49ers’ Kyle Shanahan was one of five coaches fined for violating the league’s requirement that all sideline personnel wear face coverings. Jane noticed, even as coronavirus cases surged again in California and across the United States, that Levi’s Stadium was considering admitting fans to watch games.

But the hardest thing to ignore, Sandoval says, is that when it comes to coronavirus testing, this is a nation of haves and have-nots.

Among the haves are professional and college athletes, in particular those who play football. From Nov. 8 to 14, the NFL administered 43,148 tests to 7,856 players, coaches and employees. Major college football programs supply dozens of tests each day, an attempt — futile as it has been — to maintain health and prevent schedule interruptions. Major League Soccer administered nearly 5,000 tests last week, and Major League Baseball conducted some 170,000 tests during its truncated season.

Sandoval, meanwhile, is a 58-year-old front-line worker who regularly treats patients either suspected or confirmed to have been infected by the coronavirus. In eight months, she has never been tested. She says her employer, California Pacific Medical Center, refuses to provide testing for its medical staff even after possible exposure.

Watching sports, then, no longer represents an escape from reality for Sandoval. Instead, she says, it’s a signal of what the nation prioritizes.

“There’s an endless supply in the sports world,” she says of coronavirus tests. “You’re throwing your arms up. I like sports as much as the next person. But the disparity between who gets tested and who doesn’t, it doesn’t make any sense.”

This month, registered nurses gathered in Los Angeles to protest the fact that UCLA’s athletic department conducted 1,248 tests in a single week while health-care workers at UCLA hospitals were denied testing. Last week National Nurses United, the country’s largest nursing union, released the results of a survey of more than 15,000 members. About two-thirds reported they had never been tested.

Since August, when NFL training camps opened, the nation’s most popular and powerful sports league — one that generates more than $15 billion in annual revenue — has conducted roughly 645,000 coronavirus tests.

“These athletes and teams have a stockpile of COVID testing, enough to test them at will,” says Michelle Gutierrez Vo, another registered nurse and sports fan in California. “And it’s painful to watch. It seemed like nobody else mattered or their lives are more important than ours.”

Months into the pandemic, and with vaccines nearing distribution, testing in the United States remains something of a luxury. Testing sites are crowded, and some patients still report waiting days for results. Sandoval said nurses who suspect they’ve been exposed are expected to seek out a testing site on their own, at their expense, and take unpaid time while they wait for results — in effect choosing between their paycheck and their health and potentially that of others.

“The current [presidential] administration did not focus on tests and instead focused on the vaccine,” says Mara Aspinall, a professor of biomedical diagnostics at Arizona State University. “We should have focused with the same kind of ‘warp speed’ on testing. Would we still have needed a vaccine? Yes, but we would’ve saved more lives in that process and given more confidence to people to go to work.”

After a four-month shutdown amid the pandemic’s opening wave, professional sports returned in July. More than just a contest on television, it was, in a most unusual year, a symbol of comfort and routine. But as the sports calendar has advanced and dramatic adjustments have been made, it has become nearly impossible to ignore how different everything looks, sounds and feels.

Stadiums are empty, or mostly empty, while some sports have bubbles and others just pretend their spheres are impermeable. Coaches stand on the sideline with fogged-up face shields; rosters and schedules are constantly reshuffled. On Saturday, the college football game between Clemson and Florida State was called off three hours before kickoff. Dodger Stadium, home of the World Series champions, is a massive testing site, with lines of cars snaking across the parking lot.

Sports, in other words, aren’t a distraction from a polarized nation and its response to a global pandemic. They have become a constant reminder of them. And when some nurses turn to sports for an attempt at escape, instead it’s just one more image of who gets priority for tests and, often, who does not.