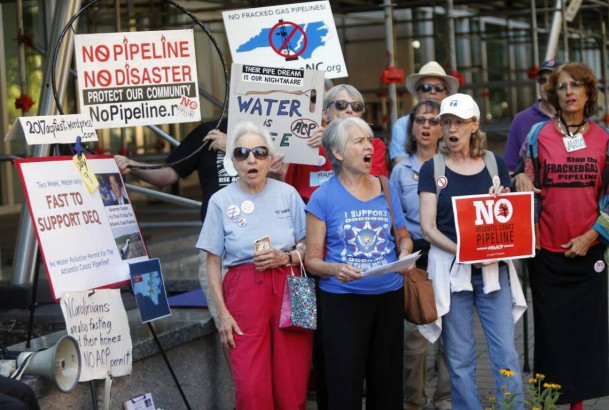 Above Photo: From newsobserver.com

Builders of the proposed Atlantic Coast Pipeline will need to give more information to the N.C. Department of Environmental Quality before the agency can decide whether to approve the part of the disputed gas line that would run through the state, the agency said Thursday.

The pipeline is a project of Dominion Energy, Duke Energy, Piedmont Natural Gas and Southern Company Gas, who had hoped to begin clearing land for construction in November, build in 2018 and have the pipeline in use in 2019.

DEQ’s request, issued Thursday, could push that schedule back. While the pipeline would need additional state and federal approvals before construction could begin, the water quality permit is a major hurdle.

Meanwhile, pipeline opponents are stepping up their campaign to try to stop the project, saying it’s a religious crusade for which they are willing to lay their bodies down.

“At its core, it’s a moral and spiritual issue,” said Greg Yost, a ninth-grade math teacher from Madison County who is working full-time to try to stop the pipeline.

Yost began fasting two weeks before DEQ’s Sept. 18 deadline to respond to the permit application, and this week has spent his days outside the department’s Jones Street office in downtown Raleigh.

Where a political issue might hold interest for a short while, he said, “By saying this is a moral issue, we’re signaling that we’re in it for the long haul. We will fight to the end, and if that means we have to put ourselves physically in the way of the pipeline, we’re ready to do that.”

The nearly 600-mile line, expected to cost more than $5 billion, would deliver fracked natural gas from the Marcellus shale drilling region in West Virginia, Ohio and Pennsylvania. The line would reach from West Virginia through Virginia before cutting across about 1,000 landowners’ property in eight Eastern North Carolina counties.

Most of the gas would be used by utility companies for power generating plants.

Duke and Dominion have promised the pipeline would bring 17,000 temporary construction jobs and spur economic development in the areas it will serve; that it would help keep energy costs lower for North Carolina users; and that it would be safe. North Carolina presently is bisected by a major pipeline — the Transco line — from which Duke can purchase gas for its 10 gas-fired plants, but it would be a major owner of the new line.

Seven mayors from towns near the pipeline’s path have welcomed the project, and some landowners have agreed to sell easements to allow the line to cross their property.

Groups have formed across the state to oppose the Atlantic Coast Pipeline. They have several reasons for their opposition: it’s not necessary; there’s no guarantee it will be safe; running through economically distressed eastern counties is unfair; the state should be encouraging more development of renewable energy sources such as wind and solar, and moving away from fossil fuels such as gas; and that the pipeline would cause irreparable environmental harm as it crosses wetlands and dozens of streams, including the Roanoke, Tar, Neuse and Cape Fear rivers.

As DEQ officials neared their deadline for responding to the LLC’s water quality certification request, members of several opposition groups have gathered at different DEQ offices. Not only are they praying for God’s guidance for the agency’s decision makers, they are asking the agency to closely scrutinize the project and to remind the public of the plans for the pipeline.

Yost, the school teacher, was joined Wednesday by the Rev. Mac Legerton of Robeson County and more than a dozen other pipeline opponents who held a mid-day revival of sorts, with songs, prayers and readings.

Francine Stephenson of Clayton attended the event, and said a piece of Johnston County land she inherited from her father would be cut by the pipeline. She so far has refused to sell an easement for the line because she fears possible explosions from leaks and thinks it would be dangerous to continue to grow sweet potatoes and other crops on the land.

“Every pipeline leaks,” Stephenson said. “It’s just a matter of how much.”

The sidewalk gathering had a religious tone, Yost said, because many of those who attended oppose the pipeline in part because they believe their Christian faith calls them to be stewards of the Earth.

Susannah Tuttle, director of N.C. Interfaith Power & Light and a staff member at the N.C. Council of Churches, brought to the gathering a resolution against the pipeline’s construction signed this week by the Council’s governing board..

“We are charged by our Creator with caring for creation … and are called to be faithful stewards of that which is entrusted to us,” Tuttle read from the resolution, which cites scripture verses in Genesis and Luke.

The Department of Environmental Quality, in its letter to the Atlantic Coast Pipeline LLC, asked for more detail on the pipeline, including why the builders would use certain methods to cross rivers and streams; erosion-control plans; plans for sampling streams for turbidity and drinking water wells for contaminants; and the criteria for when temporary bridges would be built and how equipment will cross streams when no temporary bridge is built.

Friday, the Sierra Club issued a statement applauding the additional scrutiny from the state.

“We applaud Governor (Roy) Cooper and DEQ for listening to North Carolinians and requiring Duke Energy and Dominion to provide more information so the state can thoroughly examine the water impacts that the Atlantic Coast Pipeline would have on our communities,” said Kelly Martin, Sierra Club Beyond Dirty Fuels Director.

“The fracked gas ACP would be a dirty, dangerous, expensive relic of a bygone era,” Martin said. “And there’s no reason North Carolinians should foot the bill for an unnecessary project when clean, renewable energy sources such as wind and solar are affordable and abundant here in North Carolina.”

Atlantic coast Pipeline LLC, based in Richmond, has 30 days to respond to the state’s request.

Once DEQ deems the application complete, the department can approve or deny the permit.

Whichever decision it makes is likely be appealed, either by the LLC or its opponents.