Atlantic Ocean Current At Weakest State In ‘Over A Millennium’

New research paints a ‘consistent picture’ of change to the Atlantic’s ‘conveyer belt’, which plays a major role in world’s weather.

The Atlantic Ocean current that plays a major role in the world’s weather is at its weakest state in “over a millennium”, researchers have found.

The research combines various lines of evidence to create a “consistent picture” of how the ocean current system, which is known as the “Atlantic Meridional Overturning Circulation” (AMOC), has changed over the past 1,600 years.

Sometimes called the Atlantic’s “conveyer belt”, the AMOC is a vast ocean current system that moves warm, salty water from the tropics to regions further north, such as the UK. The gulf stream is part of the AMOC.

As the AMOC carries warm water northward, it releases heat into the atmosphere. The release of ocean heat keeps countries warm – and without it, winters in the UK could be close to 5C colder. 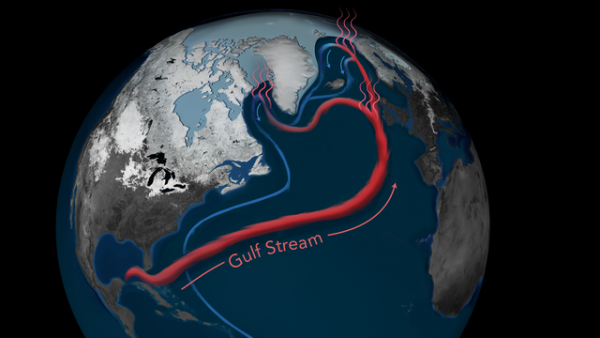 Scientists have previously raised concerns that the AMOC could be “slowing down”, with the climate crisis likely playing a role. In 2018, a study found that the AMOC had weakened by around 15 per cent since the mid 20th century.

The new study, which is by the same research team, combines a range of different data to better understand how the AMOC has behaved over the past 1,600 years.

“For the first time, we have combined a range of previous studies and found they provide a consistent picture of the AMOC evolution over the past 1,600 years,” said Dr Stefan Rahmstorf, a climate scientist from the Potsdam Institute for Climate Impact Research and an author of the study, which is published in the journal Nature Geoscience.

“The study results suggest that it has been relatively stable until the late 19th century. With the end of the little ice age in about 1850, the ocean currents began to decline with a second, more drastic decline following since the mid-20th century.”

The research’s main advance is that it combines several different types of climate “proxy data” to study changes to the AMOC, explains study lead author Dr Levke Caesar, an ocean and climate researcher from Maynooth University in Ireland.

“Proxy data” is a term given to natural records that can be used to study past changes to the world’s climate. Examples of proxy datasets include ice cores, tree rings and ocean sediments.

“The major difference is that we didn’t look at just one or two proxies – we compiled a total of 11 proxies and found that they tell a consistent story of how the AMOC evolved over the last 1600 years,” she told The Independent.

The likely causes of AMOC weakening were not specifically investigated in the study.

However, previous research has found that the climate crisis could be contributing to a weakening of the AMOC by causing land and sea ice in high northern regions to melt at an increasingly fast rate. The fast melting of ice is adding more freshwater to the ocean, which could be interfering with the normal functioning of the AMOC, scientists have suggested.

A recent report on oceans from the Intergovernmental Panel on Climate Change (IPCC), the world’s leading climate science authority, concluded that it was “very likely” that the AMOC will weaken further over the 21st century.

Some researchers have raised concerns that the AMOC could eventually hit a “tipping point” and shut down – with potentially disastrous consequences for the world’s climate. However, current evidence suggests that an AMOC shutdown is very unlikely to occur this century.

“We don’t know for sure what consequences that will bring, but given the size and impact of the AMOC, I would not want to risk a substantial weakening.”

The findings are “very novel”, said Dr Andrew Meijers, deputy science leader of polar oceans at the British Antarctic Survey, who was not involved in the study.

“While proxy based data always needs to be interpreted with caution, the authors have used a wide range of independent sources for their study, and so it is very telling that almost all point to a significant slowdown in the AMOC over the last century,” he said.

“Other studies have suggested such a decline over recent decades, but this work provides new long-term context and reveals that, prior to the era of human-induced climate change, the AMOC was relatively stable and stronger than it is now.

“This indicates that the slowdown is likely not a natural change, but the result of human influence.”