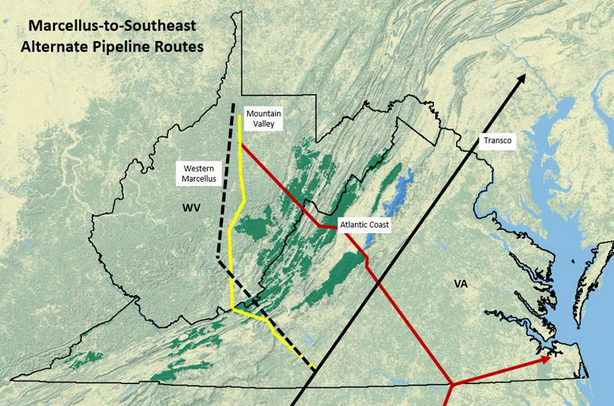 LEWISBURG, W.Va. – Keeping up with Elise Keaton as she crisscrosses West Virginia – and beyond – is not an easy task. But then, Keaton has a big job – to stay ahead of energy companies rushing to receive approval for the development of several natural gas pipelines.

In fact, the pace and tactics of the companies seeking to build the pipelines are such that even the most informed of citizens is finding it difficult to keep abreast of developments. So Keaton, the Outreach and Education Coordinator for the Greenbrier River Watershed Association (GRWA), keeps moving from her office here.

An attorney, Keaton began with the GRWA in mid-October last year. There has been little time for rest since, she revealed. “We’ve held meetings in Montgomery and Roanoke Counties in Virginia as well as in Monroe, Summers, Greenbrier, Nicholas, Upshur, Pocahontas, Lewis and Monongalia counties in West Virginia. We will be in Braxton, Harrison, and Franklin counties within the next month. I’ve probably spoken to and with about 1,500 folks.”

What she is talking about – whether it is to a handful of students at West Virginia University (WVU) or with 200 at a citizen’s forum in Lewis County – are four proposed pipelines. They include the proposed 550-mile Atlantic Coast Pipeline (ACP) which is planned to originate in Harrison County, W.Va. and terminate in southeastern North Carolina; the Mountain Valley Pipeline (MVP), also proposed to originate in North Central West Virginia and terminate in south-central Virginia; the Rover Pipeline, originating in Doddridge County, W.Va. earmarked to deliver gas to the upper Midwest and Canada; and, the Appalachian Connector, for now a vague concept that could quickly move from the drawing board to reality, potentially impacting many of the same areas to be affected by the ACP and MVP.

Keaton is not only fighting the energy giants seeking to build the pipelines, but also apathy. Yet, she remains philosophical. In sharing her thoughts about the low turnout at WVU, she observed, “I think it has more to do with who is actually impacted than any other demographic. By and large, the active members of these communities are older, more established landowners. We are seeing a few students get engaged, but we need to see much more activism in our youth to make a real difference.”

Conversely, she has also witnessed some inspiring citizen involvement. She recalled an evening at the other end of the state, in Monroe County, an isolated area in rural southeastern West Virginia. With just 13,500 residents, it has less than one-half of the population of the student enrollment at WVU; the county seat, Union, has just over 500 people. Yet, recalled Keaton, “In November 2014, three men from EQT and NextEra Gas came to present to the Monroe County Commissioners and community members at the Monroe County Courthouse in Union. After about one hour it became clear that the industry reps were really not prepared to answer the myriad of questions from community members there. When one of the commissioners stood up to adjourn the meeting after just an hour, all 125 or so people present at the meeting rose to their feet in protest. It was the first time I’d seen that type of reaction from community members, acting as a unified body and it inspired me beyond words.”

Shedding Light
Keaton also noted that simply increasing awareness about the pipelines is an essential part of her job. “Many, many people still have no idea what’s going on or they’ve heard about ‘pipelines’ in the abstract,” she said. “They have no idea that these are the largest pipelines ever proposed in West Virginia and there are potentially four that could impact our local communities. As people learn more, they become more engaged. That’s why this work is so important to me. It’s easy to mislead people when you keep them in the dark. For example, many people believe that a gas line through their property will bring them free gas. That just isn’t true. Our goal is to shed light on these important topics.”

Keaton is also not bashful in her criticism of energy officials. Responding to one who was quoted as calling West Virginians “docile,” Keaton retorted, “Clearly, he is not from here. We may seem ‘docile,’ but if that man was being completely honest with these folks about just a few jobs, decreased property values, loss of land, dangers from leaks and explosions he would probably see a different reaction.”

Keaton pointed to the discussion about the so-called job creation that will occur as a result of pipeline development. Speaking in Morgantown, she observed, “I’ve spoken with several people along the proposed routes who have said, ‘I’m going to close up and move.’ Why is that not part of the economic discussion?” Picking up on that theme from her office, she continued, “We see some pseudo economic analysis, but nothing which really takes into consideration the loss in local revenue if small farmers and business owners along the route decide to leave. We have not seen any honest analysis of what may happen to the tourism industry, which, for example, is 50 percent of Pocahontas County’s economy. We don’t see people talking about the economic value of guaranteed clean water resources in our counties. We’ve seen patently false headlines about jobs. For instance The (Beckley) Register-Herald front page headline touting 45,000 new construction jobs omitted headlines emphasizing that there will be only 50-60 permanent jobs along the entire route.”

A Hopeful Outlook
Despite the efforts by the energy industry to convince the public that the ACP and other pipelines are inevitable, Keaton remains hopeful. “Until there is a pipeline in the ground there is still a chance it won’t be built. We’ve just learned that the route is probably going to change through Monroe County. That tells us that nothing is a foregone conclusion yet.”

She continued, “It’s easy to say it’s a lost cause. It’s harder to get out there and talk to your neighbors and community about who we are and what we value as a state. The older I get the more I realize that there are talkers, there are doers and there are those who simply throw their hands up and say, ‘It’s a lost cause.’ I’m wired to be a doer.”

Her background would support that claim. After growing up in Raleigh County she attended Virginia Tech where she earned a degree in political science. She recalled, “It was there that I met Larry Gibson and began my environmental activism against mountaintop removal coal mining. I worked as a student volunteer for the Stanley Heirs Park on Kayford Mountain with Mr. Gibson until I went to law school in Houston after graduating from Virginia Tech in 2002.” Indeed, she explained, “My main reason for going to law school was to understand why it was legal to extract coal by blowing up the ancient Appalachian Mountains and I focused my legal studies on environmental policy. I earned my law degree from the University of Houston Law Center in 2005 and went on to get my license to practice in Colorado in 2008. I moved back to West Virginia in 2011 and returned to my environmental activism with Larry Gibson’s Keeper of the Mountains Foundation where I served as executive director until last fall when I transitioned to my work on the proposed pipelines. While educating the world about the devastating impacts of mountaintop removal on our land, communities and health remains a large part of my work, the proposed pipelines are moving very quickly and the opportunity to work on the issue was a timely one for me.”

Her passion flows also out of personal experience. “I think fossil fuel extraction in West Virginia benefits a few and compromises the health, safety and land for many. This is fundamentally unjust. I am also personally interested in protecting our water resources at any cost.” Referring to the contamination of the Elk River in January 2014, Keaton offered, “I was an American Water customer in January 2014. I drank an unknown quantity of PHP and MCHM and have no idea what it may have done to my body. Water is life and protecting it is my ultimate goal.”