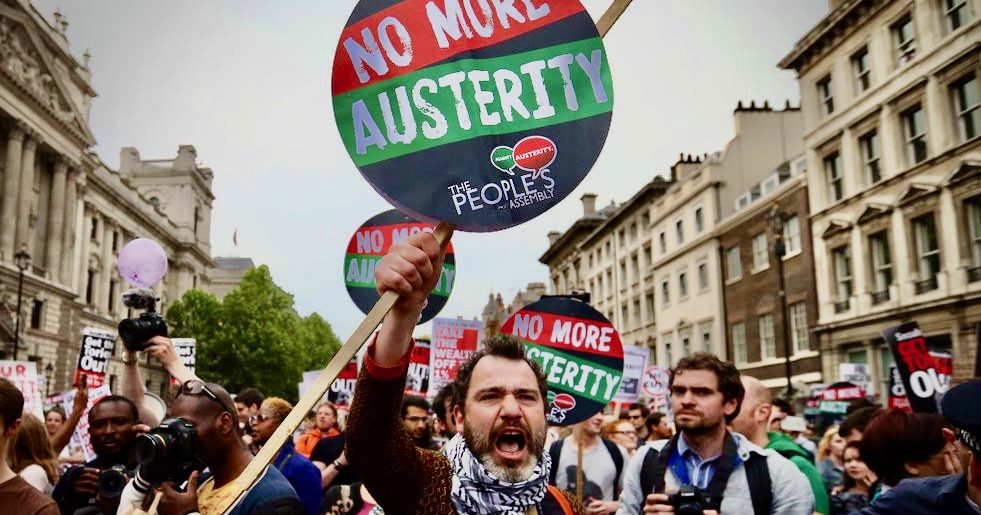 Austerity Is Still A Political Choice

Britain has not ‘maxed out’ its credit card, but it does have a government that wants working people to pay the cost of the pandemic crisis.

That’s what the new austerity measures are really about.

When Rishi Sunak delivered the spending review earlier this week, the coverage focused predictably on levels of government borrowing. With GDP set to contract by more than 11% in 2020 – the largest fall in three centuries – and unemployment expected to reach 7.5%, government spending is the only thing standing between the UK economy and complete economic meltdown. As a result, we’re forecast to see the highest levels of public borrowing since the Second World War.

In this context, Sunak felt the need to balance some new spending pledges – including a £4 billion fund for local infrastructure – with more familiar austerian measures like a public sector pay freeze. Political journalists reached for familiar analogies to explain the Chancellor’s actions. Laura Kuenssberg repeated David Cameron’s analogy that the UK had ‘maxed out’ its credit card, while other journalists echoed another of his refrains – that the country had simply ‘run out’ of money.

The UK has not, of course, run out of money and nor has it in any sense ‘maxed out’ its credit card. A country that is able to create new money ex nihilo cannot in any meaningful sense ‘run out’ of it; and the equivalent to the UK’s credit limit would be investors’ appetite to purchase government bonds. In a high-risk and low interest-rate environment, in which the Bank of England itself holds a significant stock of the nation’s debt, investors are desperately seeking out the bonds of powerful economies like the UK.

Unlike in the aftermath of 2008, today it is fortunate that there are plenty of progressive economists on hand to disabuse people of the simplistic analogies used by figures like Kuenssberg. Several articles – including this excellent piece by Daniela Gabor – have been churned out in recent days pointing to the ‘illiteracy’ of the statements used by the media to describe the public finances.

But it is still unclear whether these interventions will end up having a real impact. The debate between fiscal hawks and doves has been raging for centuries, and the household debt analogy – as the comparison between the public debt and private household borrowing has been termed – has proved notoriously difficult to budge from the public consciousness.

It’s not hard to see why this is the case: sociologists showed decades ago that human thought and language is largely structured on metaphor. We take in new information with reference to concepts with which we are familiar and narratives that we already hold to be true. People hear the word ‘debt’ and their minds naturally turn to their credit card statements and overdrafts.

If anything, the household debt analogy has become more powerful in recent decades as more people have come to have direct experience with indebtedness and all the fear and insecurity that goes along with it. While historically, invoking the word ‘debt’ would conjure a slew of moral injunctions (‘one has to repay their debts’), today it also invokes a set of very real fears about personal solvency. The financialisation of daily life reinforces the neoliberal ideology that produced it.

Rationalistic attempts to deconstruct the argument and simplistic appeals to moralism – the favourite tools of liberals – have never successfully been used to defeat fiscal conservativism. Ideas are never simply ideas, they both derive from and reinforce material inequalities of power and wealth.

Instead, where victories have been won against the austerity ideology, they have been based on the sheer weight of working-class power. The welfare state and our social security system were built in a world where organised labour was capable of shutting down the entire economy. And every time those victories were threatened, it fell to the organised working class to protect them.

Today, when we have an increasing number of writers, thinkers and campaigners willing to go out into the media and deconstruct ruling class arguments, what we are really missing is a movement that makes people feel empowered directly to resist the exercise of class power.

After decades of being beaten back, disempowered and reduced, this is why both the labour movement and the various social movements that surround it are so important to the Left today. Every injunction from a Tory minister that the nation must spend as much as it earns doesn’t just shape the news cycle, it has a very material effect on the world: people being evicted from their homes, resorting to food banks and falling through the cracks of our public services.

While many activists and campaigners undoubtedly feel defeated by the ease with which the Labour machine has undone the institutional legacy of the Corbyn project, its social roots remain. It’s critical that we use those roots in the years to come to resist the onslaught which will undoubtedly follow the pandemic.

Grace Blakeley is a staff writer at Tribune and the host of our weekly podcast A World to Win.