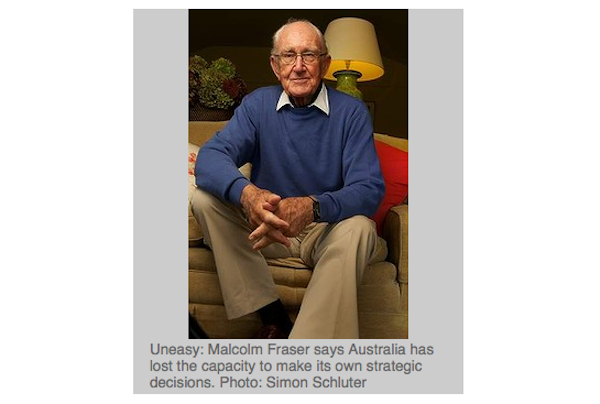 Australia Risks War With China Unless US Military Ties Cut Back

Australia risks being pulled into a disastrous war against China because successive Australian governments have surrendered the nation’s strategic independence to Washington, former Liberal prime minister Malcolm Fraser has warned.

With tensions rising in the East China Sea between China and Japan, Mr Fraser said there was a real danger of conflict and that he had become “very uneasy” at the level of Australia’s compliance with the US’s strategic interests.

“Our armed forces are so closely intertwined with theirs and we really have lost the capacity to make our own strategic decisions,” Mr Fraser said.

He said the high level of military integration, including through bases such as Pine Gap, meant Australia would have difficulty convincing the world that it was not taking part in a US-led conflict even if, formally, Canberra tried to stay out of it.

The comments represent the most serious questioning by a current or past government leader of the dominant assumption in Australia’s foreign policy since World War II – namely, that an ever closer US alliance is inherently in Australia’s security interests.

With US President Barack Obama visiting north Asia (although not China) and confirming the US would back Japan in any conflict over disputed islands in the East China Sea, Mr Fraser has called for a more basic interpretation of the ANZUS treaty, restricting its scope to consultation initially – rather than the assumption of automatic military involvement.

He has also called for a new debate about Australian-American military-to-military ties, warning that the secretive Pine Gap facility would become a military target as it would likely be pivotal to the US capability to identify and neutralise Chinese nuclear weapons sites.

Mr Fraser described the American “pivot” into the western Pacific, announced by Mr Obama in the Australian Parliament in 2011, and which relies heavily on Australia in an operational sense, as another strategic error that commits Australia to a wrong-headed US strategy of containment of China.

“Military encirclement was necessary in relation to the Soviet Union but China is quite a different story,” Mr Fraser said.

His answer is to pull back by closing down the US training bases in the Northern Territory and advising Washington that Pine Gap will also be shut down.

Hugh White, a strategic policy expert at the Australian National University, described Mr Fraser’s position, which is set out extensively in a new book by the former Liberal called Dangerous Allies, as “the most radical position argued by a former Australian prime minister on a strategic question since Billy Hughes in the 1930s”.

On Thursday, Mr Obama clarified the US position on the rocky outcrops that the Japanese call the Senkaku Islands and the Chinese call the Diaoyu.

“Our commitment to Japan’s security is absolute and article five [of the defence treaty between the two nations] covers all territories under Japan’s administration, including the Senkaku Islands,” he said in Tokyo, flanked by Shinzo Abe, the strongly nationalist Prime Minister.

Professor White said the islands were being used by Japan and China as a symbol of their competing power in the region.

Defence and strategic experts acknowledge that armed conflict over the islands cannot be ruled out.

Mr Obama’s comments drew an angry response from Beijing, which, despite qualifications, viewed the intervention as provocative and highly partisan.

In an attack on the Labor-Coalition consensus, Mr Fraser said Australia’s military was now so entwined with the giant US war machine that, functionally, the country had ceded decisions about what conflicts we eventually become entangled in.

Mr Fraser said the US had a record of embarking on disastrous military adventures, from Vietnam (which he originally supported) to Iraq and Afghanistan, and it was increasingly likely that its next military folly would drag in Australia.

He said a progressive blurring of the lines of sovereign independence could be traced back to the collapse of the Soviet Union, which should have been the moment when Australia marked out its own strategic persona.

“That was the time when we should have reassessed our policies and decided that we should exercise greater independence,” Mr Fraser said.

“An Australia which was seen to be independent working closely with ASEAN [the Association of Southeast Asian Nations], which is a remarkable diplomatic success story, would contribute more to peace and security in own part of the world than the close surrogate alliance with the United State.”

Mr Fraser left politics in 1983 after losing the election that year to Bob Hawke. He has since become estranged from his own party but revealed he had spoken about his new book and his assessment of the issues with Prime Minister Tony Abbott.

He was minister for the army and minister for defence under Liberal prime ministers Harold Holt and John Gorton, meaning he presided over conscription and Australia’s war effort in Vietnam in the late 1960s and early 1970s.

He said it was now clear that US president Lyndon Johnson had lied to the US and its allies by not revealing critical CIA assessments concluding that the North Vietnamese would never concede.