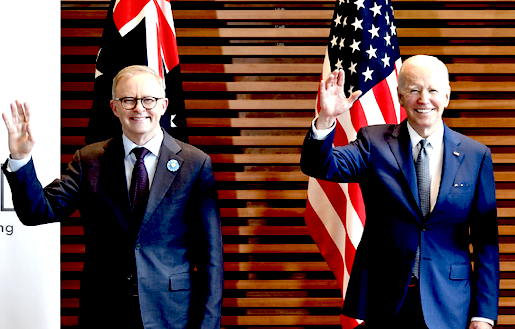 Above Photo: Australian Prime Minister Anthony Albanese, left, with U.S. President Joe Biden in May at the Quad meeting in Tokyo. Wikimedia Commons.

The government in Canberra is straining credibility in insisting the Assange case is not a political prosecution.

The difficulty for the Australian Labor government in deciding how to respond to the Julian Assange case is that once a prosecution is characterised as a political prosecution then, by its nature, there can be no expectation of due process.

The U.S.-U.K. Extradition Treaty forbids extradition in the case of “political offences.” Former Australian High Commissioner to the U.K. George Brandis — who was commissioner for almost the entirety of Assange’s Belmarsh imprisonment since 2019 — doesn’t agree that Assange is a political prisoner.

The Department of Foreign Affairs and Trade (DFAT) and its new Minister Penny Wong have consistently stated a view that the case is not political but purely a legal matter:

“Australia is not a party to Julian Assange’s case, nor can the Australian government intervene in the legal matters of another country.”

However, the most vocally outspoken Labor MP on the Assange case has now thrown that position on its head.

“This is a political case, Labor MP Julian Hill told Consortium News in a video interview [see 12:08] on July 28.

The government suggesting its hands are tied as Australia is “not a party” to the Assange case and they can’t intervene in “legal matters,” ignores the evident truths that the Assange case is indeed political, that its result will have global political consequences and that a pathway exists for a political intervention towards a political resolution.

Silent on CIA and Torture Findings

Labor also strains to maintain credibility in its stated expectations of Assange receiving fair and humane treatment, on the one hand, and on the other remaining silent on the findings of Nils Melzer, the then-U.N. special rapporteur on torture, who had found Assange had suffered both psychological torture and political persecution.

Inconsistencies like these have made the new Labor government’s position in relation to the Assange case look increasingly incoherent to the Australian public.

Following up on from the 16 July Declassified Australia article, The Guardian reported,

“Assange supporters have raised concern about a government brief to Attorney-General, Mark Dreyfus, saying ‘if surrendered, convicted and sentenced in the U.S., Assange could apply under the ITP [transfer of prisoners] to serve his sentence in Australia.’”

But The Guardian’s special sources “stressed that this document did not indicate a prisoner transfer was the government’s preferred strategy, saying it merely outlined the conditions of such a process.”  The public, and it seems his family, are kept in the dark about what any preferred strategy might be.

Assange’s brother and father, Gabriel Shipton and John Shipton, have just returned from a trip last week to Canberra in an effort to press the new Labor government to save Assange. Gabriel told Declassified Australia that the government has offered them no new information about the government’s actions.

The two met with Greens and independent MPs, but had no meetings with senior ministers of the government. In a meeting with a senior adviser to Attorney-General Mark Dreyfus, they were told that there was “nothing [Dreyfus] could do.” Gabriel and John are now pressing for a meeting with Foreign Minister Penny Wong.

Information from the new Freedom of Information, or FOIs, published today in Declassified Australia suggest the main running of this case is being coordinated within the Department of Prime Minister and Cabinet, with input from the departments of Foreign Affairs, the Attorney-Generals, Defence and no doubt the intelligence agencies.

New Freedom of Information requests by Declassified Australia have revealed the existence of a Departmental Brief concerning Assange of unknown date to the Prime Minister’s Office, but access to it was refused by the decision maker Pippa Hendon, assistant secretary defence and intelligence, Department of Prime Minister and Cabinet on July 22.

The document contains Assange’s personal information but the decision maker took the view that there are real and substantial grounds for expecting damage to Australia’s multilateral [Defence and Intelligence] relationships to occur as a result of the release of the document.

Similarly, another FOI request for any advice provided to the foreign minister, Penny Wong, in relation to the case were claimed to be “exempt in full” by Justin Whyatt, first assistant secretary, U.S. and Indo-Pacific Strategy Division, for many reasons including on the basis of the potential for the documents identified to cause damage to international [U.S.] relations.

An FOI request for documents from the Australian High Commission in the U.K. and the Australian embassy in Washington to Foreign Minister Penny Wong resulted in the supply of documents so heavily redacted as to be virtually meaningless. The documents do confirm that yet another letter was sent by DFAT to Assange on June 9 offering consular assistance.

So, what we’re left with is Labor’s “talking points” which suggest they will defend their opaque action by relying on legal limits given that Australia and the Australian government are not parties to Assange’s case.

There is no evident push for diplomatic efforts despite Australia’s importance to the U.S. achieving its strategic goals in the Asia-Pacific region. The ministerial “talking points” say there are barriers in the U.S. system given U.S. President Joe Biden’s stated priority of leaving the U.S. Department of Justice independent, but no acknowledgment that the Department of Justice is part of the executive government and the government has, and not infrequently exercises, the ultimate say in who is or isn’t prosecuted or incarcerated.

They also say the coming November mid-term elections in the U.S. play a role in any decision relating to Assange, and yet polls suggest the American public are more interested in abortion, gun laws, the economy and inflation than in Assange.

The talking points also advise a view that resolving the matter is not fully within the Australian government’s control.

“While it is not in the Australian government’s power to resolve this case legally because it has no standing in that sense, there is nothing preventing it working assiduously through diplomatic and strategic channels and discourse to ensure Assange is not sent to the U.S.’”

The official undercurrent is that Australians should not underestimate how sensitive the Assange issue is with both Democrats and Republicans, and the intelligence community in the U.S.

This sensitivity only reinforces in the minds of Australians the fact that this case has very little to do with justice or due process, or fair and humane treatment, but everything to do with politics and vengeance.