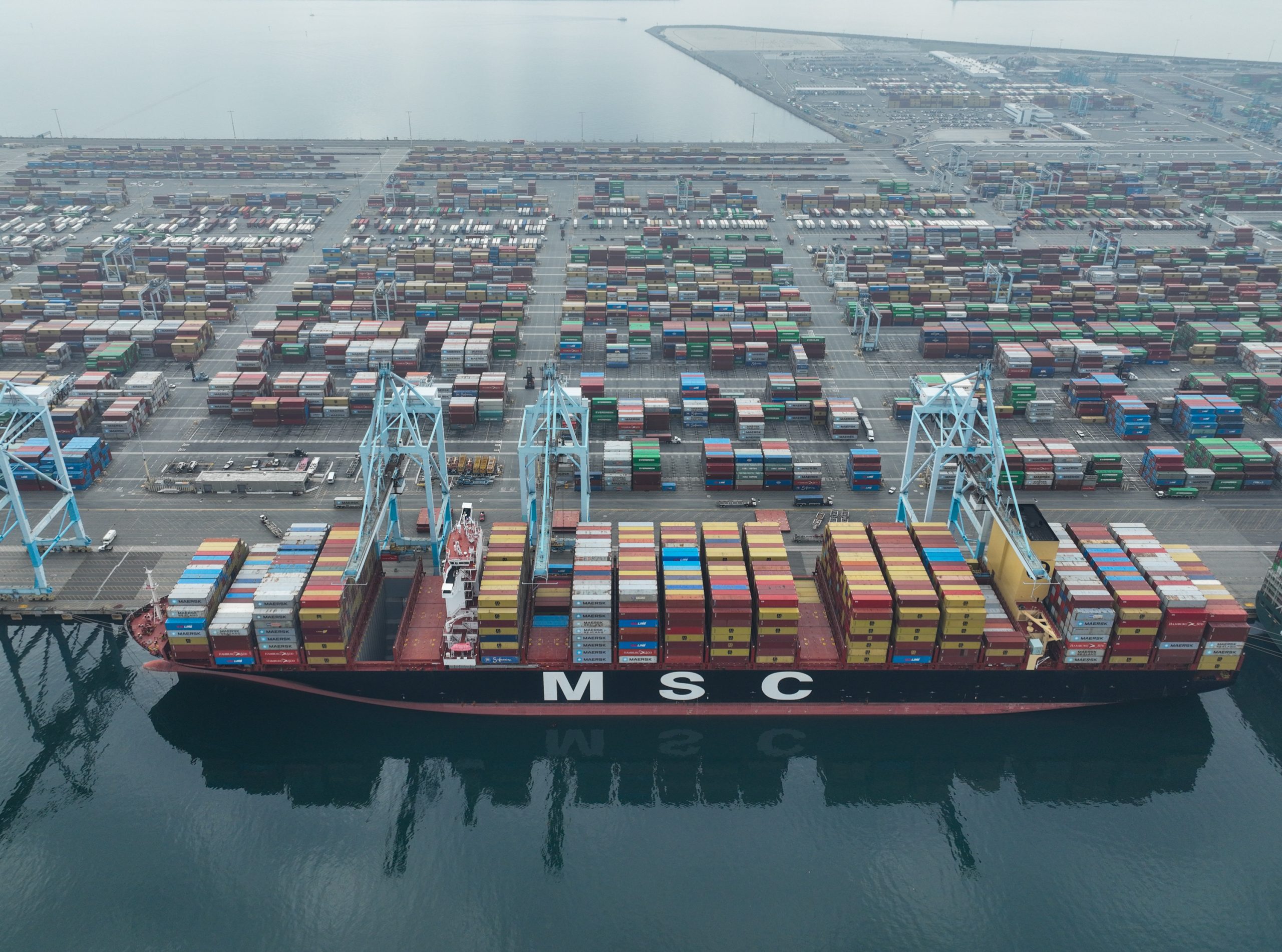 Automation And The Trade Deficit Are Decimating US Ports

Above Photo: Aerial view of containers and cargo ships at the Port of Los Angeles on January 19, 2022, in San Pedro, California. Qian Weizhong / VCG via Getty Images.

As big shipping multinationals automate jobs and US manufacturing declines, dockworkers are left with grim prospects.

Growing up in San Pedro Bay near Los Angeles, California, Sal DiCostanzo, an executive board member of the International Longshore and Warehouse Union (ILWU) Local 13 and a dock worker for over 20 years, has seen jobs in numerous industries at the ports disappear, many of which were exported.

“The last remaining jobs that are here that are good paying union jobs with benefits are longshore and other related supply chain jobs,” said DiCostanzo. “Automating these jobs would be taking away the only jobs left for this community.”

DiCostanzo also pushed back on proponents of automation using clean technology as an incentive to do so, saying manual equipment that is electric can be introduced as well, and that environmental justice can’t be achieved at the expense of economic justice.

“Automation is not a panacea for the cargo congestion issues that we have, it’s not necessarily less expensive and is not more efficient,” added DiCostanzo. “What it does do is it shifts what were or are currently local wages, local taxes, and local control to foreign entities and companies that will benefit from the operations they have here.”

A new report published by the Economic Roundtable on 30 June outlined concerns with how foreign supply chains and consolidated shipping companies are extracting wealth from the US supply chain via ports on the US West Coast, draining wealth, income, resources, and jobs from ports.

According to the report, foreign shipping companies that have consolidated into 3 international shipping alliances own 9 of the 11 container terminal companies at the Ports of Los Angeles and Long Beach, California, handling 81% of the containers transported through the ports.

The report notes that in these two major ports, US exports have declined from peaks in 2011 in Long Beach to a 38% decline, and a 2013 peak in Los Angeles to a 52% decline, representing a loss of manufacturing jobs for California residents, while 72% of outbound containers from these ports are empty rather than filled with US products to be shipped abroad.

This trade imbalance—where for every $1 worth of goods exported from these ports, $8.42 worth of goods is imported into the US—is five times greater than the rest of the ports in the US.

In 2021, trucks leaving the San Pedro Bay ports carrying import containers traveled 6.7 billion miles, costing an estimated $279 million in uncompensated costs to the public due to impacts on infrastructure and emissions.

Automation in the shipping industry has further threatened the economic benefits these ports yield, despite capital costs associated with automation offsetting any savings from labor costs, and research showing automated ports are generally 7 to 15% less productive than non-automated ports.

For shipping companies, automation degrades the number of workers and the labor unions that represent dockworkers, and with that the economic benefits those jobs and their income yield for nearby communities.

Rebecca Schlarb, a third generation dock worker at the Port of Long Beach, has seen dozens of jobs disappear to automation over the years since she started working there in 1991. She now works on a fully automated terminal.

“The most substantial problem I see, specifically with Long Beach Container Terminal in their automation, is that there’s limited flexibility in the delivery,” said Schlarb. “It’s easier to move around and adjust for equipment breakdowns on a conventional terminal than it is on an automated terminal when it’s isolated and locked down.”

She explained that when a crane or another piece of automated equipment breaks down, it completely halts cargo movement or traffic until it’s manually fixed rather than in a traditional operation where it would be isolated.

Schlarb also expressed concern for the pension she has to retire on, good pay, union membership, and other benefits that are at risk of being eliminated through further automation, and emphasized the importance and sacrifices dock workers made during the COVID-19 pandemic to ensure the ports kept moving cargo through the supply chain.

“With automation, that’s definitely threatened, because it has substantially cut jobs now,” added Schlarb. “I think it would be very detrimental to continue on with the speed of automation the shipping companies want, and it’s not efficient. It saves the foreign shipping owners and foreign terminals labor costs, but that money doesn’t stay here in the US. It leaves and goes to other countries or in the pockets of the super rich already and it stays there. It doesn’t trickle down to the rest of the US.”

In June 2022, President Biden visited the Port of Los Angeles and criticized the soaring shipping fees and profits of foreign shipping companies.

“I’ve called on Congress to crack down on foreign-owned shipping companies that have raised their prices while raking in just last year $190 billion in profit, a sevenfold increase in one year,” said Biden. “The rip-off is over.”

The report calls for government intervention to alleviate these trends at the ports, including imposing a displaced worker fee on automated equipment, a state tax on automated equipment, elimination of fee discounts for exporting empty cargo containers, a discount for exported containers with cargo to incentivize rebalancing the current trade deficit, and work with California export industries to more effectively utilize the ports in exporting products.