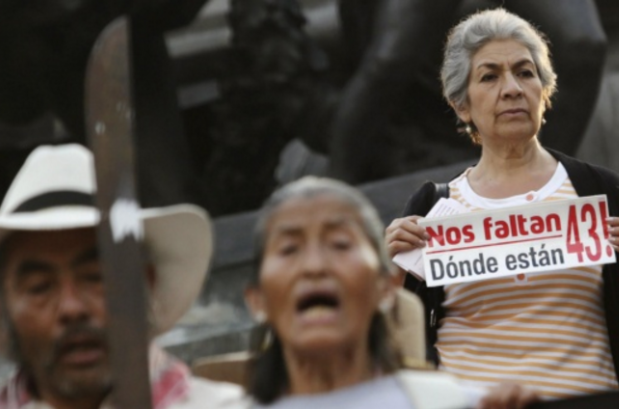 Above Photo: Demonstrators take part in a march to mark the 15-month anniversary of the disappearance of the students from Ayotzinapa College Raul Isidro Burgos, in Mexico City. Reuters

Relatives of the missing students have not lost hope and they continue to demand that the Enrique Peña Nieto government return their loved ones.

Hundreds of people joined the parents of the 43 Ayotzinapa students, who organized a peaceful demonstration in Mexico City on Saturday to mark the 15th month since their children were forcibly disappeared in the southern state of Guerrero.

Demonstrators accompanied the students’ relatives and marched to the Guadalupe Basilica, where they attended a service in honor of the students who were abducted in the city of Iguala, on the night of Sept. 26, 2014.

Meliton Ortega, the representative of the Ayotzinapa teachers training college, told the press that the relatives of the missing students have not lost hope that they’re still alive, and they demanded that the government of Enrique Peña Nieto secure the safe return of their beloved ones.

The Mexican government has claimed that the students were abducted by corrupt police officers, who subsequently handed them over to a local drug gang. According to this version of events, the United Warriors cartel killed and incinerated the students, then threw their remains in plastic bags into a river.

This official version, described as the “historical truth” by the former attorney general, has been challenged by civil society and experts, who have called it “weak and not definitive.”

Meanwhile Mexico’s 27th Infantry Battalion — the army group implicated in the disappearances of the 43 Ayotzinapa students last September — has finally agreed to speak with legislators after more than a year of resistance.

The battalion was mandated to speak with legislators by the newly created Special Commission for the Ayotzinapa case, an independent research group supported by the Inter-American Commission on Human Rights.

Their testimony is expected to drastically boost the case and clarify the students’ whereabouts, since observers and human rights groups have long believed that the army witnessed what happened the night the students went missing.